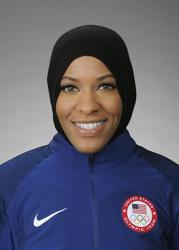 Muhammad is joined on the council by FIFA Player of the Year Carli Lloyd, who was named a member and co-chair, as well as Olympic Gymnastics Champion Gabrielle Douglas and Caitlin Cahow, a two-time Olympic medalist in ice hockey.

“I am honored to be appointed to the President’s Council on Fitness, Sports and Nutrition. President Obama’s nomination is deeply meaningful to me and I hope to serve the American people in supporting the President and First Lady’s important work toward a more health conscious nation,” Muhammad said.

The first U.S. woman to compete in a hijab at the Olympic Games, Muhammad won bronze with the U.S. Women’s Saber Team in Rio and inspired fans around the world in a year in which she also was named one of TIME Magazine’s 100 Most Influential People.

A graduate of Duke University with degrees in international relations and African and African-American studies, Muhammad previously served on the U.S. Department of State’s Council to Empower Women and Girls Through Sports as selected by then-Secretary of State Hillary Clinton.