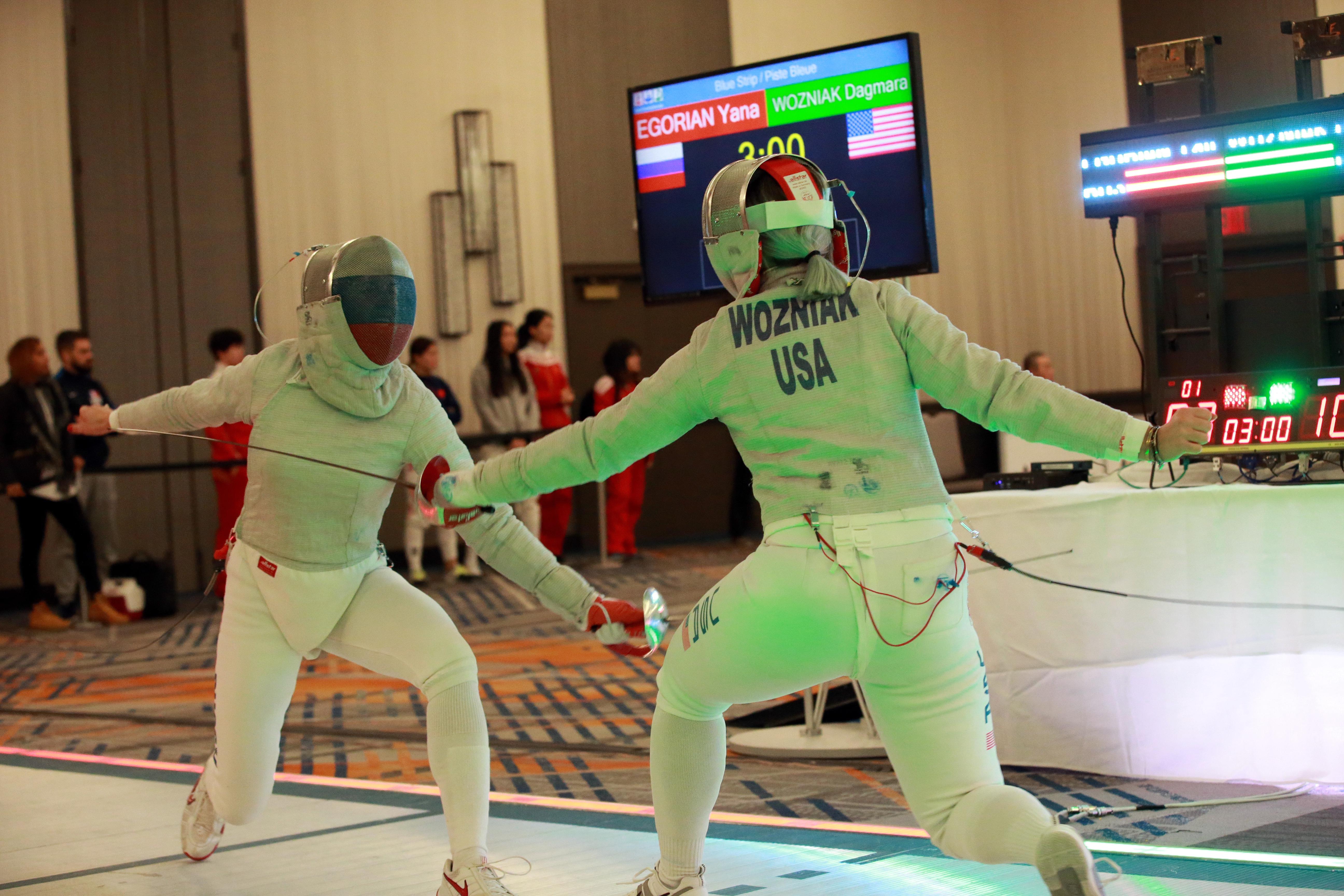 Wozniak, who placed eighth overall, earned her best finish on the circuit since 2015 and came two touches away from reaching the podium.

Seeded 32nd in the table of 64 after a 5-1 finish in pools on Friday, Wozniak drew Italian Chiara Mormile in the opening round. The 2015 Junior World Champion scored four straight touches to open the bout, but Wozniak replied with a 6-4 run to close the gap to 8-6 at the break. Wozniak kept her opponent to three touches in the second period for a 15-11 win.

Fencing Egorian in the table of 32, Wozniak came out strong with a 3-1 lead and fought off a comeback by Egorian late in the first to stay ahead at 8-6. Egorian pulled ahead at 12-10 in the second period, but Wozniak rattled off five straight touches to take the bout, 15-12.

“I think I put a lot of pressure on her and just didn’t let up. Even though she started to come back at the end, I just started thinking ‘One action at a time. One action at a time’ and just focused on the next touch. Regardless of whether I was losing or winning, I was just thinking of the next step,” Wozniak said.  “I wasn’t going to go out without a fight.”

In the table of 16, Wozniak got off to a quick start and led Sandra Marcos (ESP), 8-3 at the break. Marcos came back in the second to tie the bout at 10. Wozniak pulled away, however, and closed with a 15-12 win

From the start of the day, Wozniak’s bouts were followed by a crowd that grew to take over half the seats at the venue and it was soon standing room only as the fans cheered her on.

“It was great and through all that noise I only heard my coach or Olek Ochoki. He’s like my left hand. We’re a team and I always trust doing what he says and the same thing with [Coach] Yury [Gelman.] Front of the strip, it’s Olek talking, back of the strip it’s Yury,” Wozniak said. “I just zoned out and didn’t necessarily pay attention to the crowd. But it was still really nice to have everyone here. There were a lot of girls from my club here and all the high fives afterwards were great.”

The tournament marks the second international event since Rio for Wozniak who took time off after the Games.

“It was definitely a battle. There’s a lot of stuff that goes on – life stuff, personal stuff, health stuff. It was just a matter of blocking that out and just putting it in a box and dealing with it later,” Wozniak said. “But right now it’s fencing and this is what I love to do and this is my job so I tried to just focus on work and get the job done.”

Wozniak will return to the strip on Sunday to fence in the team event where she is expected to anchor the American squad.

“I’m excited. I didn’t go to Orleans and this is my first team competition since Rio, so I’m excited to bring it to the table,” Wozniak said. “I’m sad Mariel’s not here. She’s my wingman, I’m her wingman. So it’ll definitely be a change of roles tomorrow, but I’m ready for that and maybe I’ll even surprise some people.”

Wozniak’s eighth place finish will allow the two-time Olympian to return to a top-four position in the National Team Standings with just four tournaments remaining before the 2017 Senior World Team is selected in April.

One of Wozniak’s teammates on three past squads, Eliza Stone (Chicago, Ill.), earned a top-32 result in Brooklyn. A three-time Senior World team medalist, Stone is aiming to qualify for a fourth World Team.

Stone, who advanced from the pool rounds on Friday with a 6-0 record, fenced a close table of 64 bout against Clara Laurent (FRA), leading by a touch at 10-9 in the second period. Stone scored five of the next seven touches, however, to end the bout at 15-11.

With the Americans out of medal contention, athletes from France, Italy and Korea battled for positions on the podium.

Vecchi led Berder, 14-11, in the semis before the Frenchwoman scored four straight for a 15-14 win.

Criscio won her first career World Cup medal after a 15-6 loss to Kim.

In the early rounds, Berder’s gold medal run was nearly halted by 20-year-old Leanne Singleton-Comfort (Marysville, Calif.) The Air Force Academy sophomore led Berder, 7-3, in the first period of their table of 64 matchup before dropping dropping the bout, 15-12.

Fifteen-year-old Ryan Jenkins (Cupertino, Calif.) fenced Egorian in the table of 64. Competing on the second day for the first time at a Senior World Cup, Jenkins trailed Egorian, 8-1, after the first period. Although she scored nine in the second, Jenkins lost the bout, 15-10.

Rio Olympic team medalists Ibtihaj Muhammad (Maplewood, N.J.) and Monica Aksamit (Matawan, N.J.) were both eliminated in the table of 64.

Muhammad made a late comeback against Criscio, but lost their bout, 15-12.

Although Thompson led Margaux Gimalac (FRA), 8-3, in the first period of their table of 64 bout, Gimalac forced a tie at 12 and scored the bout-winning touch at 15-14.

Top eight and U.S. results are as follows, including athletes who did not advance to the table of 64: