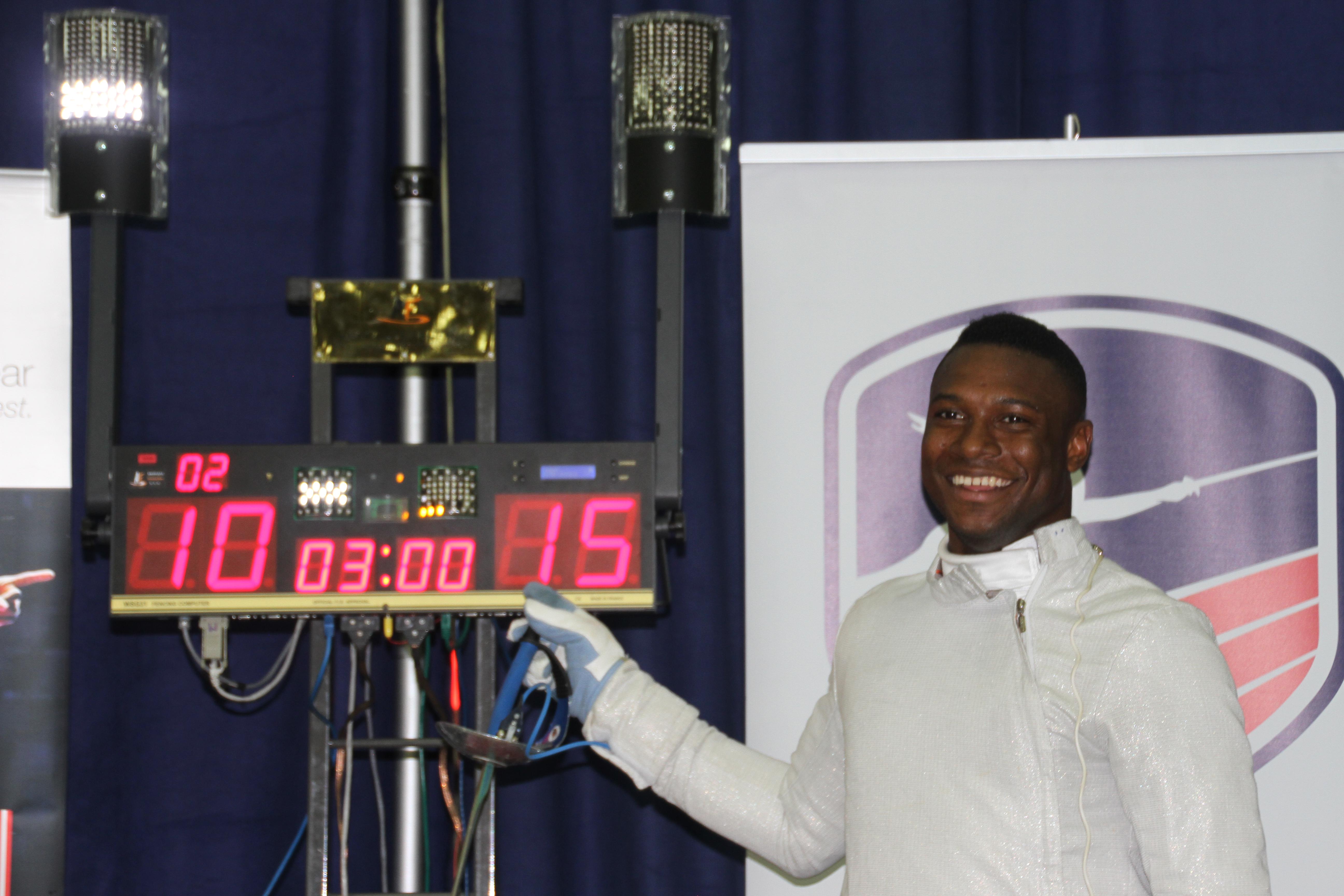 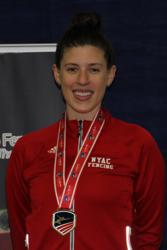 (Baltimore, Md.) – Kelley Hurley (San Antonio, Texas) and Daryl Homer (Bronx, N.Y.) have competed together twice at the Olympic Games with each winning a medal, but the Division I National Championships would present each athlete with a new first fencing moment.

For Hurley, the competition on Friday saw the three-time Olympian win her fifth individual Division I National Championships gold – tying the women’s epee record of five which is held by her younger sister Courtney Hurley (San Antonio, Texas).

For Homer, the win meant entrance into the National Champions Club with his first Division I individual title after a silver medal finish in 2016.

In the preliminary rounds, Hurley dropped two pool bouts to end with a 16th seed and a bye into the table of 32 where she defeated 2015 NCAA Champion Isis Washington (Parsippany, N.J.), 15-13.

Hurley fenced a pair of up-and-coming cadets in the next two rounds, qualifying for the semifinals with victories over Joy Ma (Merrick, N.Y.) and Sannchi Kukadia (Manhasset, N.Y.) by 15-5 and 14-8 margins, respectively.

“I went into this really excited and then my pool matches were really difficult. I was having a hard time waking up for some reason, so I wasn’t looking too forward to DEs, but then everything came together and I started fencing really well,” Hurley said. “I think that seems to be a common theme of my fencing. I’m just not a morning person. So once I wake up and everything remembers how to move, it seemed to all come together.”

In the semis, Hurley would be pushed by Kasia Nixon (Los Angeles, Calif.) who was coming off a silver medal win at the Junior World Championships earlier this month.

With the score tied at six in the first period, Nixon picked up two singles to build moment into the second with an 8-6 lead. With Nixon up, 12-11, in the second, Hurley came back to tie the bout at 13 and score a single with 25 seconds left in the period. After the break, Hurley doubled out for a 15-14 win.

“Honestly, the whole time I felt like I could win it. It’s just a matter of how much energy I wanted to put into it. I decided sort of towards the middle end that I really wanted to try for it. I really had to dig deep,” Hurley said.

Hurley expected her sister, Courtney to come through the other side of the bracket for an All-Hurley final, but their Rio Olympic teammate, Kat Holmes (Washington, D.C.) proved to be the spoiler, earning her first career DE win against Courtney, 11-10, in overtime during the other semifinal.

Hurley led the bout, 4-3, at the first break, but Holmes went on a 5-1 run in the second for an 8-5 lead. Although Hurley tied the bout at nine, Holmes scored two singles to pull away again. Hurley answered with two singles of her own to end the second with a tie at 11. With the score tied again at 13, Holmes took the first single and Hurley responded with one of her own for a tie at 14. As she had for most of the period, Hurley continued to press Holmes to the back of the strip and take the winning single and end the bout, 15-14.

Both Hurleys took time off after the Rio Olympic Games where the U.S. Women’s Epee Team finished fifth and this is the second national win of the season for Hurley who took gold at the December Noroth American Cup.

“I’m so happy. We’ve been training for this, so I feel like this is really how I’m starting off my season,” said Hurley who is focused on being prepared for the Senior World Championships in July in Leipzig, Germany.

After taking much of the last season to finish her master’s degree in public health at the University of Texas at San Antonio, Kelley recently purchased a house with Courtney in Houston where the two will live and train as they seek to qualify for a third Games together.

“This last week is my last week of classes, so I don’t have to go back and forth anymore so I can focus purely on fencing and lessons. I haven’t gotten enough lessons lately which is probably the reason why I was a little bit winded at the end – because lessons with Andrey are really important. So I’m going to get back into the swing of things and keep working hard. I’m looking forward to getting back into the routine,” Kelley Hurley said.

While she had considered retirement after Rio to pursue medical school, Kelley announced two weeks ago that she and Courtney would both be returning in a bid to qualify for another Olympic Games. This time, however, women’s epee may only be contested as an individual event – meaning that a maximum of two slots could be on the line for the Americans.

But the Hurleys remain committed to going to Tokyo together.

“Rio didn’t go exactly how we all hoped. There were too many close matches and it was really disappointing and I remember thinking ‘I don’t want to retire on that.’ I feel like my career deserves a better ending than that,” Kelley Hurley said. “Especially since we’ve been working with Andrey and I’ve had some of the best results of my career leading up to the Olympics. I thought I wanted to end on a better Olympics. I needed that for my sanity and I’ve been at this for so long that I didn’t want to go out like that.”

In the men’s saber event, Homer entered the tournament as the reigning Olympic silver medalist and favorite for gold, but his London Olympic teammate, Jeff Spear (Wynantskill, N.Y.) entered the competition as the No. 2 seed who upset Homer, 15-14, to win his second Division I National Championship in 2016.

Although the top fencers in the world rarely compete in pool bouts on the international circuit, Homer ended the preliminary rounds in a three-way tie for first with a 6-0 pool result.

In the quarters, Homer would fence 2011 Junior World Team member Evan Prochniak (Hudson, N.H.) who was one of three fencers in contention for the fourth position on this year’s Senior World Team as the No. 7 fencer in the nation. Up, 8-3, at the break, Homer controlled the second period for a 15-9 win.

The semifinals would match Homer against Spear with Homer taking an 8-6 lead at the break and Spear pushing to keep the bout within a touch in the second period. Homer closed out the bout, however, at 15-12.

On the other side of the bracket, 2014 Junior World Team bronze medalist Geoffrey Loss (Laguna Beach, Calif.) was making a run at qualifying for his first Senior World Team after a career-high top-32 result at the Cancun Grand Prix put him within striking distance of the national squad.

Loss, who moved up from No. 5 to No. 4 in the National Team Point Standings, joins Homer, Spear and 2016 Olympian Eli Dershwitz (Sherborn, Mass.) on the team.

Although Homer has won silver medals at both the Olympic Games and Senior Worlds, he maintained that he was focused on filling the gap in his athletic resume.

“I had a very clear focus and I set out really wanting to win this year. It was very very important. Especially because the people I’m around now are all National Champions, so I was kind of the odd guy out,” Homer said. “I didn’t think I had my best stuff today, but I was able to pull out a lot of really good matches. I think everything’s a lot more competitive at the domestic level now which is great. We had a lot of good competition for this year’s team and I’m just excited to get ready for the World Championships and the World Cup circuit in May and see where I can go.”

With two more international tournaments in May, followed by the Pan Am Championships in June, Homer is looking forward to competing at Senior Worlds with a strong team after reaching a career high No. 1 in the team event last season.

“I’m really really excited with the team we have, with the new people and returning faces. I think we’re more talented than ever now and we have the experience and everyone is really really hungry,” Homer said.

Twelve events were held in the April North American Cup with 10 titles awarded to veteran fencers and two in Division III events.

In the veteran men’s 50-59 epee event, 1992 Olympian Chris O’Loughlin (Jersey City, N.J.) won his first NAC title as a vet fencer. O’Loughlin met Evan Ranes (Henderson, Nev.) in the final after Ranes defeated O’Loughlin’s Olympic teammate, Jon Normile (McLean, Va.), 10-7, in the quarters. O’Loughlin controlled the bout for a 10-3 win, putting himself in contention to return to Team USA as a veteran fencer during his first season of eligibility.

A former NCAA All-American and Pan American Junior Champion, Jane Carter (Bedford, Mass.) fenced in her first NAC as a foil fencer in the veteran 50-59 event and came away with gold. Carter, who last fenced on the national circuit in 2013, drew third-ranked Margaret Fagan (New York City, N.Y.) in the final bout, taking a 10-6 win over Fagan who recently moved up to the 50-59 category after winning bronze in the 40-49 event at the 2016 Summer Nationals.

At the 2016 April NAC, Kwangsuk Chung (Des Moines, Wash.) swept the veteran 40-49 and veteran open foil events. On Friday, Chung appeared to be on his way for a repeat with a 10-5 win against Thomas Bryan (Durham, N.C.) in the veteran open finals.

The No. 1 veteran 40-49 women’s saber fencer in the nation, Kate Sierra (North Richland Hills, Texas) opened her weekend at the NAC with a win in the veteran open saber competition. Sierra fenced fellow 40-49 fencer Clare Deming (Garwood, N.J.) in the finals, winning the bout, 10-3.

Both of the Division III events held on Friday were won by collegiate fencers.

A member of the UMass Fencing Club Team, Adam Shanahan (Franklin, Mass.) began the day as an E-rated fencer in the Division III men’s saber event and came home with gold in his third appearance on the NAC circuit. Shanahan fenced Linus Dannull (Durham, N.C.) in the finals and took the bout, 15-14.

Anna Gooch (Sierra Madre, Calif.), a senior on the Tufts University Fencing Team, last stood on the NAC podium in 2011 when she won bronze as a Division III epee fencer. Fencing on the NAC circuit for the first time since the 2014 Summer Nationals, Gooch returned to the Division III epee event where she defeated Darby Haskel (Denver, Colo.), 15-12, in the finals.