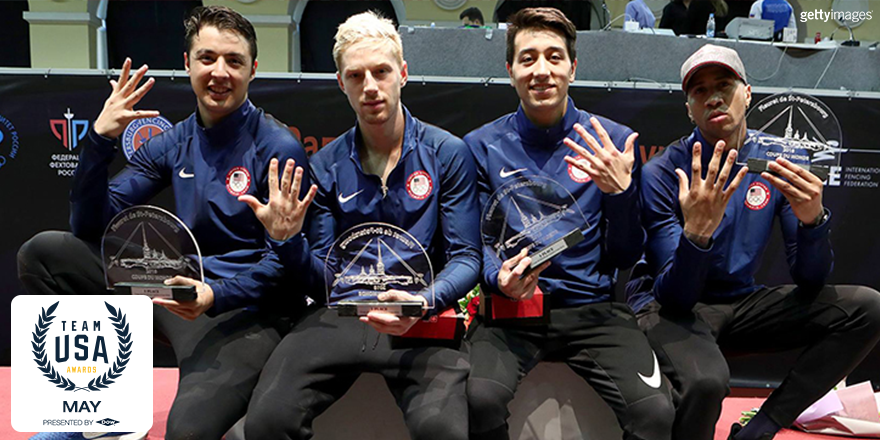 (Colorado Springs, Colo.) – The U.S. Men’s Foil Team was recognized on Wednesday with Best of May honors for the Team USA Awards presented by Dow.

The men’s foil squad was honored for its history-making gold medal win at the St. Petersburg World Cup on May 6 when the men became the first U.S. team to sweep all five World Cup titles in a single season.

Together, the team members defeated Italy, the reigning Senior World Champions, by a score of 45-25, in the gold medal final in St. Petersburg to retain their No. 1 world ranking.

The U.S. Men’s Foil Team will attempt to continue its undefeated streak at the Pan American Championships on June 19 in Havana, Cuba.

The U.S. Olympic Committee also recognized ice hockey forward Patrick Kane (Buffalo, N.Y.) and swimmer Katie Ledecky (Bethesda, Md.) for men’s and women’s individual honors. Kane became the first-ever American hockey player ever to earn tournament MVP honors at the IIHF Men’s World Championship in Denmark and Ledecky broke her own world record in the 1,500-meter freestyle by five seconds to win the Pro Swim Series in Indianapolis. Ledecky also posted the fastest time on U.S. soil in the 400 free and the third fastest swim ever in the 800 free.

Team USA awards are voted on by fans (50%) and a panel of NGB representatives and members of the media (50%).