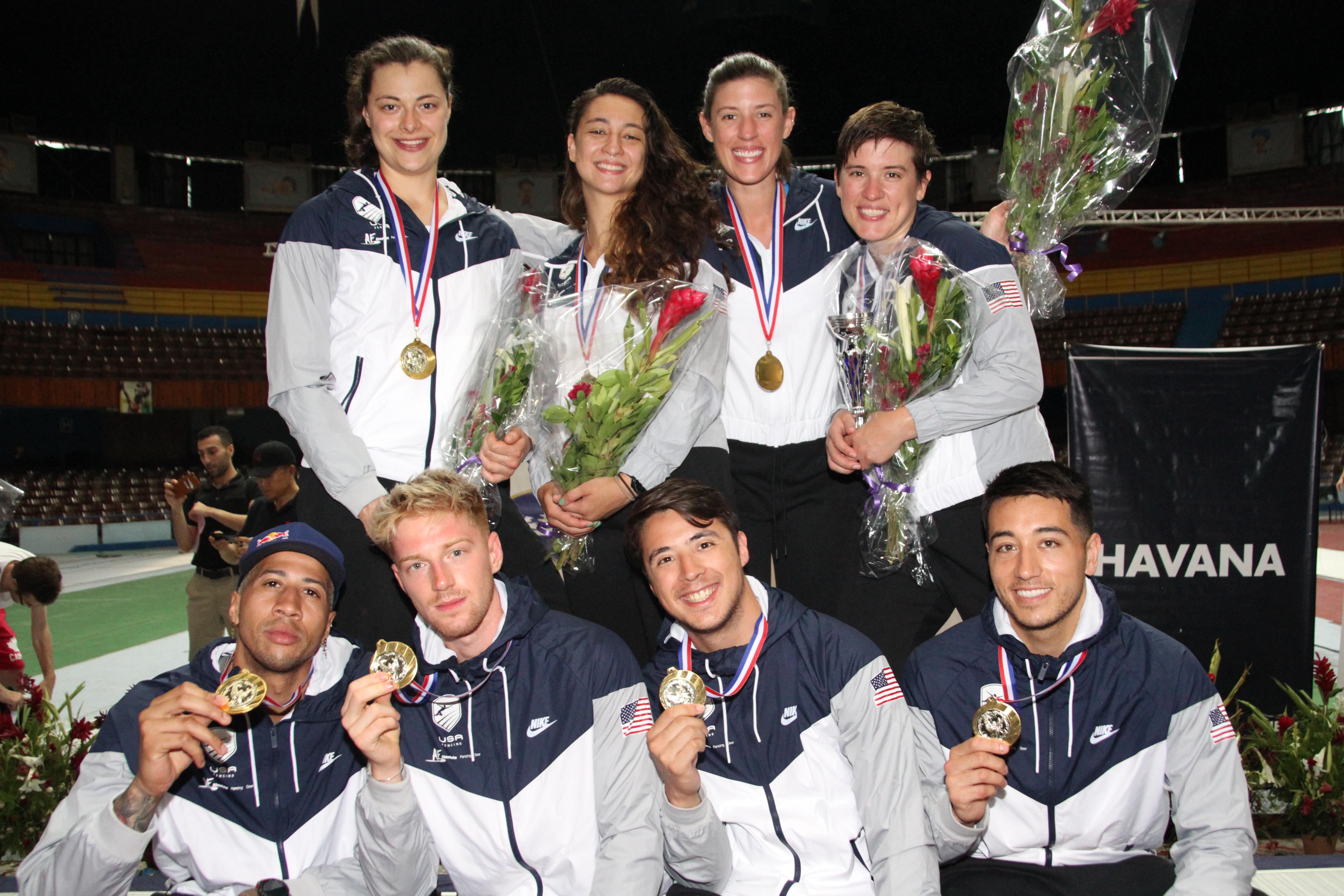 (Havana, Cuba) – The U.S. Men’s Foil and Women’s Epee Teams secured the eighth and ninth gold medals of the week for Team USA at the Pan American Championships on Tuesday.

Featuring all four members of the team that won bronze at the Rio Olympic Games and made history with an undefeated World Cup season, the U.S. Men’s Foil Team continued its streak in Havana with its 11th straight Pan American title.

Team USA won or tied each of 27 bouts held across three matches as the squad defeated Colombia, Canada and Brazil en route to winning gold.

“From the very beginning, we knew that we didn’t want to have any stressful situations, so we just took care of bout by bout and it made for some pretty big differentials in our bout scores and I’m really proud of how we fenced as a unit today,” said the team’s anchor, two-time Olympic medalist Alexander Massialas (San Francisco, Calif.) “We’re such a close team. We’re great friends and we really elevated each other’s levels. Luckily we were able to get the job done pretty stress free and I’m looking forward for Worlds.”

In the quarter-finals against Colombia, the U.S. team posted five shutout bouts and qualified for a 45-8 win with 2013 Senior World Champion Miles Chamley-Watson (New York City) posting a +15 indicator as he gave up not a touch in three bouts and anchored the squad to the win.

While Brazil put up a good run in a quest to upset Team USA in the 2017 final, which the U.S. squad took at 45-37, the U.S. men left no doubt in this year’s gold medal matchup. Massialas led the squad with a +12 indicator with World No. 1 Race Imboden (Brooklyn, N.Y.) posting +10 and Meinhardt finishing at +9.

“This competition is a good indication of where we are skill-wise. There have been times where some of the teams in our region have given us trouble in the past, including even last Zonals – we could have kept things from getting as close as they did sometimes – but we didn’t really fence to the best of our abilities,” Massialas said. “I think this really showed the dedication that we have to the sport and shows what we can really do when we put our minds to it because we came out firing right from the very get-go. We never lost the bout. We never let people think they could win our matches today. So I think that’s a really good indication going forward and I think that bodes really well.”

Team USA will enter the Senior World Championships next month in Wuxi, China as the No. 1 seed in the men’s foil event and the squad is aiming for the top step of the podium after taking silver to Italy in 2013 and 2017.

The squad will be together in a training camp in St. Louis from June 28 – July 7 during the USA Fencing National Championships and July Challenge in preparation for Worlds.

“I’m excited for our training camp in St. Louis because the more time we spend together as a unit, the better we become. And obviously I’m most excited for Worlds because we’ve done something that’s pretty historic over the course of the season and we can do something that’s historic in the history of fencing,” Massialas said. “We have a tough task ahead of us, but I think of all the teams capable of doing it, I think we’re probably best suited for it.”

The U.S. Women’s Epee Team successfully defended its title in a field that included a Cuban team poised for an upset.

First, however, Team USA would face a challenge from Mexico in the quarter-finals – a team with two fencers that had upset U.S. team members in the individual rounds.

London Olympic team bronze medalist Courtney Hurley (San Antonio, Texas) led the team in scoring with a +9 indicator in two bouts, posting a critical 11-5 win over Elizabeth Medina in the fourth to give Team USA a 19-12 lead that the U.S. squad retained throughout the bout. Kat Holmes (Washington, D.C.) anchored against Alejandra Teran, giving Team USA the 43-35 win.

In the semis, Team USA fenced a Cuban team led by individual bronze medalist Yamilka Rodriguez Quesada. Cuba won or tied the first six bouts to take a 30-23 lead before Hurley racked up a 10-5 run against Yania Gavilan Sanchez to put the team within one of a tie.

“I felt like my old self. I was famous for that. I did that a lot where I’d get a lot of touches in a row and I just felt it – sniffed the fear,” Hurley said.

Two-time Junior World medalist Amanda Sirico (Bowie, Md.) tied the score at 38 in the eighth with a 4-3 win against Diamelys Gonzalez Sandoval and Holmes returned as anchor against Quesada. With 10 seconds remaining in the bout, however, Cuba pulled away with a double for 44-42.

“I wasn’t nervous at all. I was very calm, very focused, even when we were down by two. I was looking at my time – this much time, this many points I needed to score. Even when we were 44-42 and we were down by two, I was like, ‘okay, that’s five seconds a touch. That’s perfectly within the realm of possible,’” Holmes said of those final seconds. “I just buckled down and I didn’t even think about the fact that I couldn’t get a double and 45 would win it. The thought never even crossed my mind. I was just like, ‘No, I’m going to score these points.’ It helped that she decided to jump out, so the first touch was scored within like a second and a half, but I was sticking to my game plan.”

In overtime, the two athletes scored a double, but a single is what was needed to win the match.

With 10 seconds in the bout, Holmes scored first to seal the win for Team USA at 45-43.

“I knew that I wanted to draw her prep and then fleche into her prep, which is what I wanted to do ironically in the same situation when I lost in overtime earlier than I would’ve liked with the Mexican in  individual, and I couldn’t make myself do it. But I didn’t even have to make myself this time,” Holmes said. “When I saw the opportunity, my body just went, fleched, scored. And then it kind of all hit me. I got really shaky and just stood there, breathing, hyperventilating for a while.”

Fencing Canada for gold, Team USA won six of the first eight bouts to take a 40-26 lead with both Holmes and Sirico posting +6 records and Hurley going even with individual gold medalist Kelley Hurley (San Antonio, Texas) sitting as a reserve for the bout.

“We had a lot of ups and downs today, but one of the things I think our team is getting really good at is when there are downs, we used to get really flustered and frustrated, but now we all keep it together,” Holmes said. “Collectively, we keep with it and we really believe that we can come back and we’ve gotten much better [at making comebacks] … Whether we do it in one bout or whether we do it piece by piece, we’ve always trusted each other in the sense that we don’t think we’re going to blow it all, but now we can really rely on each other too.”

The U.S. Women’s Epee Team also will hold a training camp in St. Louis before departing for Wuxi. Team USA is currently sixth in the world after a season that has included a gold medal win at the Dubai World Cup and bronze in Barcelona.