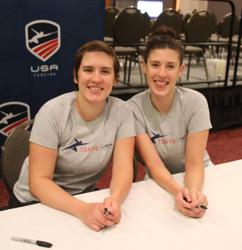 (Colorado Springs, Colo.) – USA Fencing is pleased to announce the release of the organization’s marks to commemorate the upcoming 2020 Olympic and Paralympic Games in Tokyo.

Fencing fans will see the Tokyo logo used in promotional materials and worn by team members during the leadup to the Games over the next two years.

Attendees at the October North American Cup in Milwaukee will have the opportunity to purchase the first Tokyo t-shirts at the USA Fencing merchandise tent. 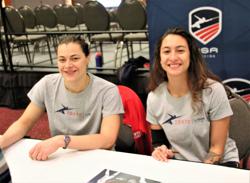 20. The Tokyo Olympic Games will be the first Games to include both individual and team events for both men and women with 12 gold medals available.

19. The Tokyo Paralympic Games has added women’s saber fencing and, for the first time in history, will have all three weapons contested for both men and women.

18. The top U.S. fencers at the first Olympic Games in Tokyo in 1964 were Albie Axelrod who finished ninth after winning bronze at the 1960 Games in Tokyo and Harriet King who place ninth at the second of her four Olympic Games appearances. By contrast, Team USA’s top results at the 2016 Olympic Games includes four podium finishes with team bronzes for men’s foil and women’s saber and individual silvers for Alex Massialas and Daryl Homer.

17. Team USA can send a maximum of 24 fencers to the 2020 Olympic Games with three athletes per weapon for the individual events and one replacement athlete for each of the team events.

15. Fencing will be one of five sports at the Tokyo Olympic Games that have been held at every modern Olympics since 1896.

14. Both Olympic and Paralympic fencing will be held at the Makuhari Messe venue which also will house Olympic taekwondo, karate and wrestling and Paralympic goalball, taekwondo and sitting volleyball.

13. All four of the top men’s foil fencers in the nation have seen some of their best career World Cup circuit results in Tokyo with foil fencer Gerek Meinhardt winning his first career Grand Prix medal there in 2013 with a silver and his first gold in Tokyo the following year. Meinhardt has won two of his six career individual World Cup medals and Tokyo and two of his three Grand Prix podium finishes in Japan’s capital.

12. Alexander Massialas earned the World No. 1 ranking for the first time after his gold medal win at the 2015 Tokyo World Cup – a position he retained through the Rio Olympic Games where he won silver for Team USA.

11.  Race Imboden won two of his first international medals in Tokyo, taking bronze at the 2014 Tokyo World Cup and gold at the 2014 Tokyo Grand Prix. His results in Tokyo would contribute towards Imboden’s 2014-15 Overall World Cup title win – the first for any U.S. man in any weapon.

9. The second-ever Paralympic Games was held in Tokyo in 1964, but only featured nine events which did not include fencing which was added to the program in 1996. The 2020 Paralympic Games will include 22 total sports.

8. Mariel Zagunis will seek to make history as the first fencer in history to win three career individual Olympic golds in saber. In 2020, Zagunis will be 35 and aims to have her daughter Sunday (born in 2017) by her side.

7. The 2008, 2012 and 2016 Olympic Games each had at least one 18 year old fencer on the roster as the team’s youngest athlete. In 2020, two athletes who are currently ranked in the top eight in the nation will be 20 years old. Saber fencers Chloe Fox-Gitomer and Tori Johnson won team silver at the Junior World Championships together this year with Fox-Gitomer making her Senior World debut this yea as well.

5. The first U.S. fencer to win a medal at the Paralympic Games was Scott Rodgers in 2004. Team USA has more than a dozen athletes on the hunt to qualify for Tokyo for a chance to return the United States to the Paralympic podium. Both Rio Paralympians Joey Brinson and Lauryn DeLuca remain in pursuit of qualification again in 2020.

4. At the end of the 2017-18 season, Team USA has 13 athletes ranked among the top-10 in the world in their weapons with Eli Dershwitz and the U.S. Men’s Foil Team holding No. 1 world rankings.

3. Athletes on the 2018 Senior World Team hailed from 12 states and represented nine universities.

1. All six U.S. weapon squads have won medals at the Senior World Championships or Olympic Games with the U.S. Women’s Epee and Foil Teams winning gold and Wuxi and the U.S. Men’s Foil Team taking silver. Who will stand on the podium in Tokyo?