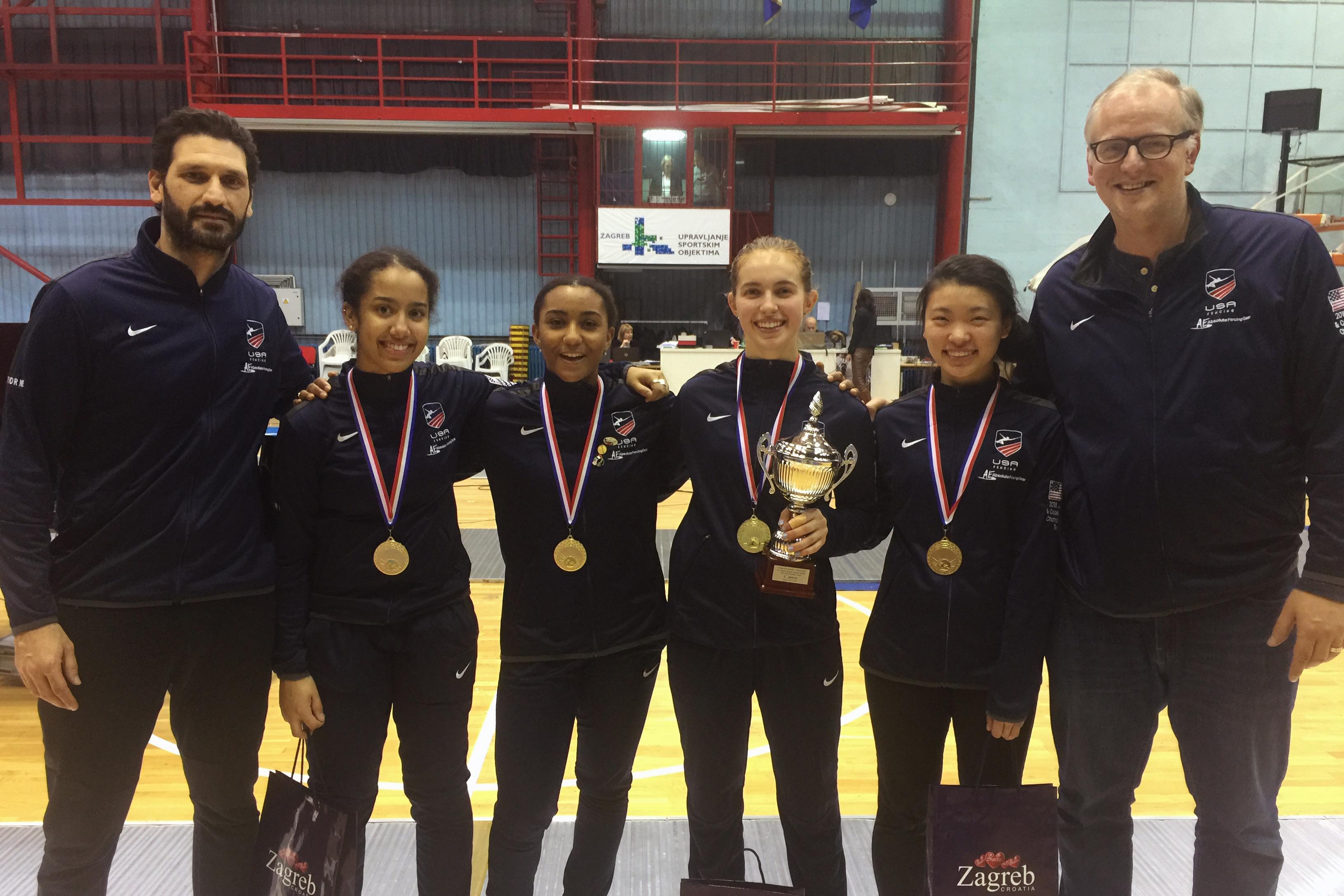 (Colorado Springs, Colo.) – Team USA’s women’s foil fencers finished 1-2-3 in individual and won gold for the second time this season in team at the Zagreb Junior World Cup in Croatia over the weekend.

Three of the four members of the squad that won the 2018 Junior World Championship title won gold, silver and bronze individually, showing the strength of a squad whose fencers have visions of both individual and team gold medals at the 2019 Junior Worlds in April.

Sylvie Binder (Armonk, N.Y.), the 2016 Cadet World Champion, won her third individual Junior World Cup medal of the season, following her gold in Sofia, Bulgaria and bronze in London with another title in Zagreb.

A 15-year-old cadet who shocked the field with her individual bronze medal at the Junior Worlds, Lauren Scruggs (Ozone Park, N.Y.) followed her double gold medals in Division I and junior at the January NAC with her first Junior World Cup podium finish, taking silver behind Binder.

Delphine DeVore (Westport, Conn.), a bronze medalist at the 2018 Cadet Worlds, rounded out the American trio with bronze – matching her result in Sofia.

Together with their 2018 Junior World teammate and 2018 Cadet World silver medalist, May Tieu (Belle Mead, N.J.), the Americans now hold four of the top eight positions in the Junior World Rankings.

DeVore holds the No. 2 position behind 2018 Junior World Champion Yuka Ueno (JPN) with Scruggs in fifth and Binder and Tieu in seventh and eighth.

Team USA showed its depth across the board, with 11 fencers qualifying for the 32 – at which point no U.S. fencer lost to a foreign opponent for the rest of the day.

After a close win in the table of 128 over Mhairi McLaughlin (GBR) at 15-12, Binder remained virtually unchallenged until the medal rounds. The Columbia University sophomore defeated Jane Caulfield (CAN), 15-5, in the 64 and took her next three wins by 15-4 margins to advance to the semifinals, with victories over Helen Tan (Coppell, Texas), Yara Elsharkawy (EGY) and 2018 Junior World medalist Eva Lacheray (FRA).

Scruggs opened the direct elimination rounds with wins over Marta Oklinska (POL) and Alina Poloziuk (POL) by 15-8 and 15-12 margins, respectively. After a 15-9 defeat of Genevieve Clarke (IRL) in the table of 32, Scruggs fenced Zander Rhodes (South Orange, N.J.) – one of the top contenders to join Scruggs on the 2019 Cadet World Team. Scruggs easily bested her teammate, 15-5, and went on to defeat Tinney Mak (CAN), 15-8, in the quarters to secure a podium finish before besting Alice Rocher (ITA), 15-5, in the semis.

DeVore easily defeated three foreign opponents in the early rounds before being challenged by her American teammates. In the table of 128, DeVore defeated Julia Eistert (AUT), 15-5, and followed with 15-4 and 15-6 win against Clemence Vissotsky (FRA) and Lucrezia Grimaldi (ITA), respectively. DeVore’s table of 16 bout would come to the last touch against Ever Marinelli (San Francisco, Calif.) who upset 2017 Junior World silver medalist Serena Rossini (ITA), 15-14, in the previous round. DeVore defeated Marinelli, 15-14, and won her next round against Nicole Pustilnik (San Diego, Calif.) to set up a semifinal against Binder.

In a rematch of their semifinal in Sofia, DeVore fenced a close bout, but Binder repeated her past victory, ending with a 15-9 win while Scruggs dominated her semi against Alice Recher (FRA), 15-5.

Binder and Scruggs would fence for the third time in the last month, reprising their Division I final and junior quarter-final at the January NAC. Scruggs won each of those bouts by close margins, defeating Binder, 15-14, in junior and 15-12 in Division I. This time, however, Binder came out with a strong lead at 5-1 and kept building to a 15-9 win.

Binder, a three-time Junior World Team medalist, remains No. 1 in the Junior National Team Point Standings with Scruggs moving up from No. 3 to No. 2 and Tieu in third. DeVore holds her fourth position while Pustilnik seeks to challenge for her first Junior World Team by moving into fifth.

In the team competition on Sunday, all four fencers – Binder, Scruggs, DeVore and Tieu – competed in the opening match against Australia as Binder led the squad with a +11 indicator and Scruggs anchored the team to a 45-21 victory and nine straight bout wins.

Fencing against Singapore in the quarter-finals, the Americans dominated the match for a 45-20 win. Binder came in as anchor, closing with a 7-0 run against Maxine Wong to end with a +20 indicator on the match.

In the semifinals, Team USA dropped just two bouts against Germany for a 45-28 victory. Binder anchored the squad with Tieu and Scruggs each posting positive indicators.

After France dispatched Junior World No. 2 Italy, 45-33, in the other semi, Team USA found itself down for the first time when France took a 20-18 lead after the fifth. After Binder’s 8-7 win against Lacheray in the sixth, it was DeVore who would be the game-changer with a 7-1 victory against Jade Marechal in the seventh. Scruggs posted a key win against Lacheray at 3-2 in the eighth to give Team USA a six-touch cushion at 36-30 and Binder closed out against Recher to finish the match at 41-37.