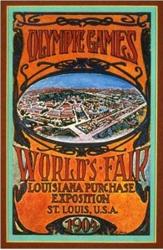 The 1904 Summer Olympics, officially known as the Games of the III Olympiad, was an international multi-sport event which was celebrated in St. Louis, Missouri, in the United States from August 29 until September 3, 1904, as part of an extended sports program lasting from July 1 to November 23, 1904, at what is now known as Francis Field on the campus of Washington University in St. Louis.

At the 1904 Summer Olympics, five fencing events were contested, all for men only. The third edition of the Olympic fencing program included a team event (in men’s foil) for the first time, as well as the only Olympic singlestick competition. Events for fencing professionals were eliminated.

In 1904, 8 fencers competed in 5 competitions for Untied States.