“The Star-Spangled Banner” played a staggering seven times as Team USA protected their World Championship podium dominance, edging out both Italy and France with 19 medals.

Seven-time individual medalist Anne-Marie Walters was strong all day, giving up no more than six points besting our very own Starks-Faulkner (earning her eighth individual medal.) With an American now on the podium in six of the last seven years in the Vet 60 women’s foil event, the red, white and blue domination continues.
The U.S. Men’s Saber Team also returned to the podium with new very shiny silver bling. The Veteran Saber Team has now been on the podium six of the last seven years bringing the U.S. medal count to a current total of 11 medals, going into the fourth day of the 2022 Veteran Fencing World Championship.
Current medal count for team USA hit double digits today, reaching 11 total medals heading into Day 4 of the 2022 Veteran Fencing World Championship.
View All | RSS

Welcome to the hub for all things Team USA at the 2022 Veterans World Fencing Championships in Zadar, Croatia. Read competition recaps, meet the team, find a schedule, check out photos and more. Let's go, USA

Nearly three years to the day since a Veteran Fencing World Championships last took place, the resolute veteran legends from USA Fencing will start to descend on Zadar, Croatia, for the event’s 2022 edition.

This year's Team USA roster features 72 veteran fencers who, despite disappointment in the cancellation of this event in 2021, are determined to prove that age is just a number — a number of medals, that is.

“The 2022 Veteran World Championships in Zadar will offer the opportunity to meet again as fencers and friends, to share amazing experiences, and to celebrate our sport,” says FIE Interim President member, Emmanuel Katsiadakis. “We look forward to sharing these amazing experiences and sport celebrations with you.”

President of the Croatian Fencing Federation Antonio Trcin adds that Zadar’s “vast culture, rich heritage, medieval buildings and ancient legacy will be an experience for every fencer coming to our city. We are sure that after this event, you will be filled with great energy you will carry home wonderful memories of this competition for a long time.”

In the last Veteran World Championship in 2019, USA Fencing took home a historic 22 medals, including a podium finish in all six team events — marking the first time in the event’s history that a country has taken six team medals. Team USA dominated the overall medal count with seven more than second-place Italy.

This year’s Veteran World Championships squad sees a slate of 72 veteran athletes representing the red, white and blue. One of those very athletes is USA Fencing’s most decorated veteran fencer with seven individual Vet World titles: Jane Eyre. Avid fencer Eyre has won a medal every year she’s competed in 60-69 women’s saber, dating back to 2013.

Team USA further displayed its  dominance in 2019 in women’s saber as well as men’s foil, medaling in every age category. In the 50-59 men’s saber event, a U.S. fencer had stood on the podium in four of the last five years, and in Egypt, it had two as Mark Lundborg won gold and Tamas Vidovszky earned bronze. Both Lundborg and Vidovszky eagerly continue their quests for the podium this year in Zadar.

The 2022 FIE Veteran World Championships is hosted by the Croatian Fencing Federation Oct. 6–12. Follow USA Fencing’s coverage of the event on our Facebook page HERE. The live video stream of the competition can be found HERE. 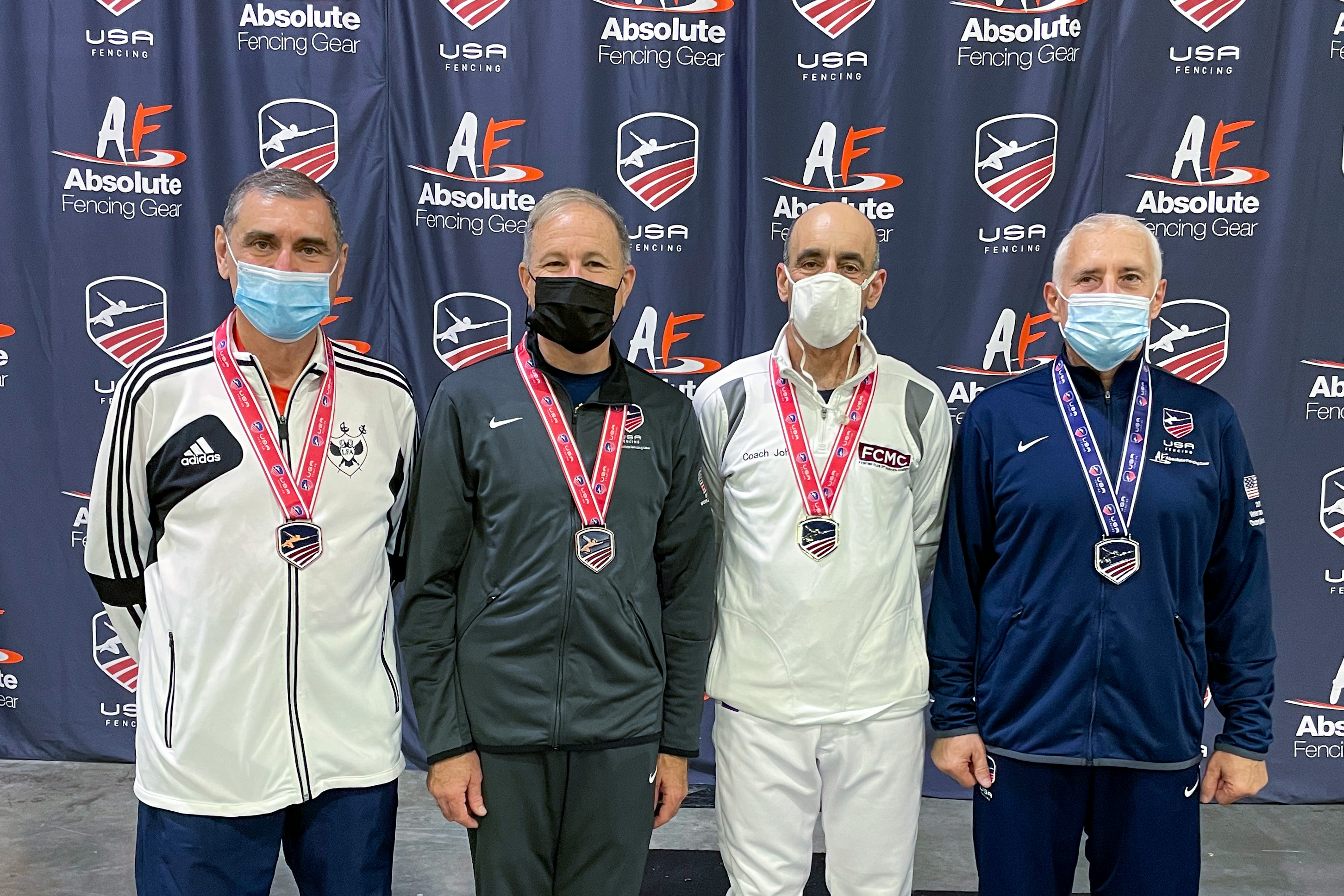 (Colorado Springs, Colo.) – Seventy fencers have qualified to represent Team USA at the Veteran World Championships based on results earned at the July North American Cup in Philadelphia and the Veteran National Championships in Atlanta.

The top four athletes in the 50-59, 60-69 and +70 categories on the USA Fencing National Team Point Standings were named to the Vet World Team. Events also were held in the 40-49 and +80 categories as well as open events for any athlete age 40 and older. Positions on the National Team Point Standings included both results at the Vet Nationals as well as the July North American Cup in Philadelphia.

On Aug. 30, the FIE announced that the 2021 Veteran World Championships will be postponed due to the COVID-19 pandemic with the potential rescheduling of the event for January of 2020.