The 25 fencers on the 2022 Senior World Team represent an exciting mix of seasoned athletes with Olympic and Senior Worlds Medals as well as fencers making their debuts on fencing’s most illustrious stage. 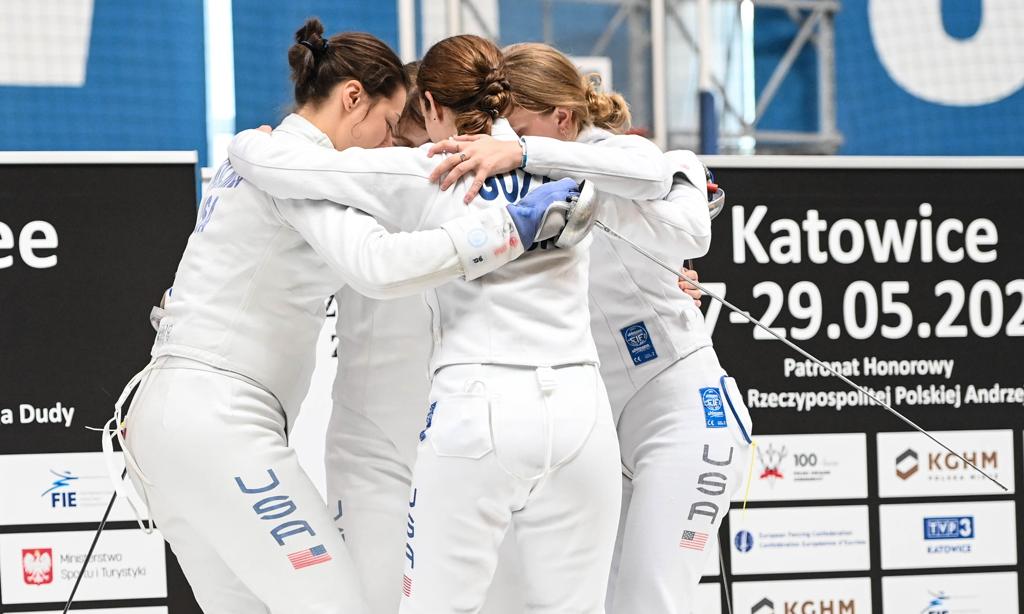 The women's epee team of Kat Holmes, Hadley Husisian, Margherita Guzzi Vincenti and Anna van Brummen will be arriving in Paraguay and Egypt fresh off a bronze medal at the Katowice World Cup. (Photo by #BizziTeam)

The squads are set, and the world is waiting. Let’s fence.

With the final World Cup event of the 2021–22 international season in the books, we now know who will represent Team USA at the 2022 Pan American Senior Championships in Paraguay and the 2022 World Fencing Championships in Egypt.

The 25 fencers on the 2022 Senior World Team represent an exciting mix of seasoned athletes with experience at the Olympics and Senior World Championships as well as fencers making their debuts on fencing’s most illustrious stage.

Across the cadet, junior and senior levels, these athletes have combined to earn dozens of medals for the red, white and blue. Those impressive results include two medals — gold in men’s team foil and bronze in women’s team foil — at the 2019 World Fencing Championships in Hungary.

Because of the pandemic and the Tokyo Olympics, there hasn’t been a Senior Worlds since 2019, meaning this year’s tournament represents the end of a three-year wait.

But only one of the six teams — men’s saber — is bringing back all four Tokyo Olympians for another shot at world glory. That’s a promising sign that the talent pipeline in USA Fencing is strong, meaning those at the top of our sport are constantly being pushed by the next wave of phenomenal fencers battling for a spot on a Senior World Team.

As evidence of this, there are six teenagers on the squad — a group of young fencers who have proven themselves ready for this next stage.

Following the action in Paraguay (June 3–8) and Egypt (July 15–23) requires just a couple of taps. If you follow USA Fencing Instagram or Facebook, you won’t miss a moment.

How the Athletes Qualified

All season long, Team USA athletes have crisscrossed the country and the globe to face off against the best athletes in the nation and the world.

These domestic and international tournaments present an opportunity for fencers to earn qualification points. The higher a fencer places in a tournament, the more points they earn. This process is made more interesting by something called the “strength factor” multiplier. Tournaments with a tougher field of competitors are worth more points.

For fans, following along is easy. At USA Fencing, we “show our work” when calculating these points, so fans always know where fencers rank.

You can start by consulting the point charts in the Athlete Handbook to know the value of each finishing position. Then visit USA Fencing’s Current Point Standings page. Here, you get a complete, always up-to-date look at each fencer’s point totals. For the Senior World Team discussed in this post, find the weapon you want and look for the PDF that includes the words “Sr Team.”

Let’s look at the qualifying path of men’s foil fencer Nick Itkin as an example. Itkin won gold medals at two USA Fencing tournaments this season. Each first-place finish was worth 1,000 points, multiplied by the strength factor of 1.1, meaning each gold earned Itkin 1,100 points. Since a fencer only gets to count their top two domestic results, Itkin earned the maximum 2,200 points in the domestic category.

For international points, fencers count their top four finishes. For Itkin, that included 12th at the Tokyo Olympics (1,248 points), 6th at the Plovdiv World Cup in Bulgaria (1,668 points) and a pair of top-32 finishes.

All in all, Itkin earned 6,724 points — enough to secure a spot atop the rankings.

Here are the teams that will compete at the:

The athletes below are listed in order of their final ranking in the point standings. 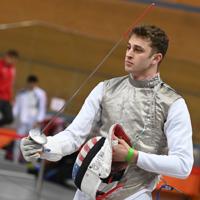 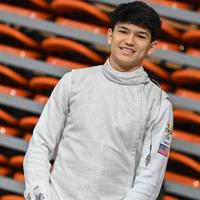 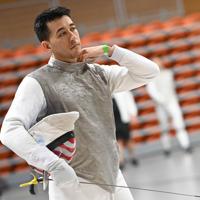 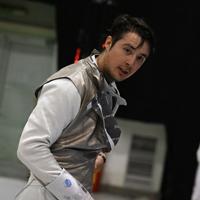 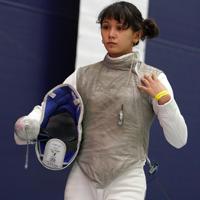 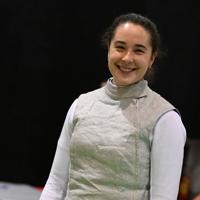 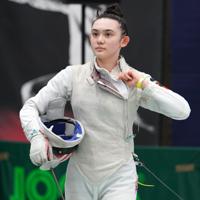 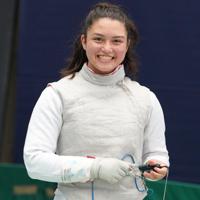 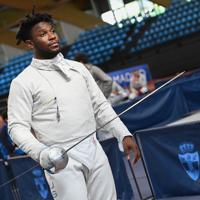 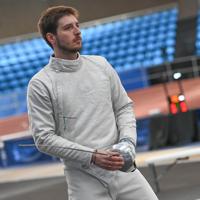 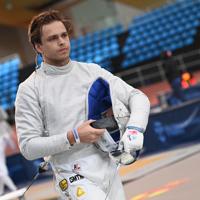 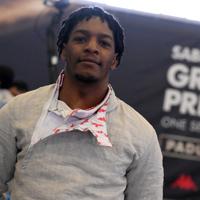 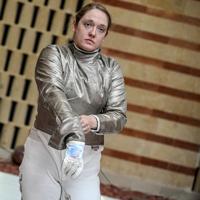 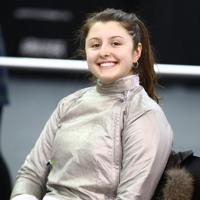 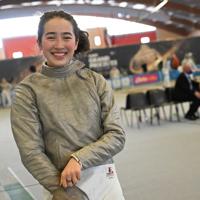 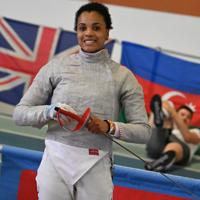 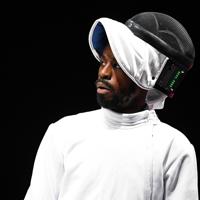 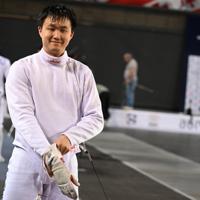 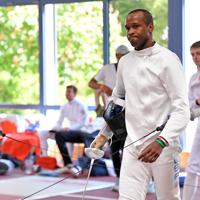 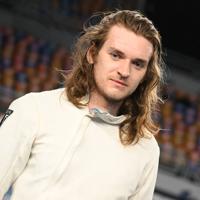 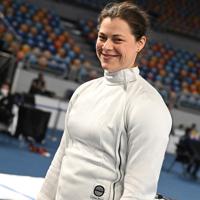 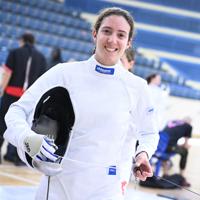 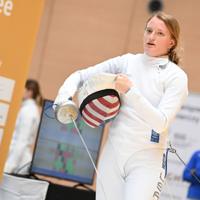 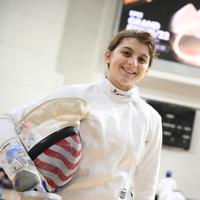 *A Note About Alen Hadzic’s Inclusion on the Team

We understand that many in the USA Fencing community will question Alen Hadzic’s inclusion on our 2022 Senior World Team, given that he is still under investigation by the U.S. Center for SafeSport — an independent body separate from USA Fencing.

We had hoped for a swifter resolution to this investigation, which has now stretched on for more than a year. We share in the frustration of fencers and fencing fans.

The U.S. Center for SafeSport has the exclusive authority to adjudicate reports of alleged sexual abuse and sexual misconduct. As long as the outcome of this investigation remains unresolved, USA Fencing is obligated to allow Hadzic to compete internationally.

But we have taken decisive action where we can. For the past year, we have implemented a safety plan designed to protect athletes, coaches and staff at all tournaments at which Hadzic has been a participant.

While we await the conclusion of this protracted investigation, we will continue to put the safety of our athletes, coaches and staff above all else.