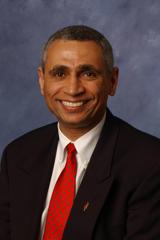 Abdel Salem OLY is the retired head coach of the U.S. Air Force Academy, directing both the men’s and women's fencing programs. While at USAFA, the Falcons won several Western Region Championships. Coach Salem led a team of primarily walk-ons to 19 All-American titles and a national championship.

He holds an M.D. from the University of Alexandria, Egypt, where he was a practicing general physician. Abdel fenced in the 1984 Los Angeles Olympics, and was a coach for the 2016 Rio Olympics.

Salem was a staff member of the U.S. Fencing Coaches College and is the former President of the United States Fencing Coaches Association where he supervised the revision and expansion of the coaching education and certification system.

Currently, he is coaching at Front Range Fencing Club, working with students of all levels from ages 6 and up. You might also spot him as he referees national events or coaches at clinics.