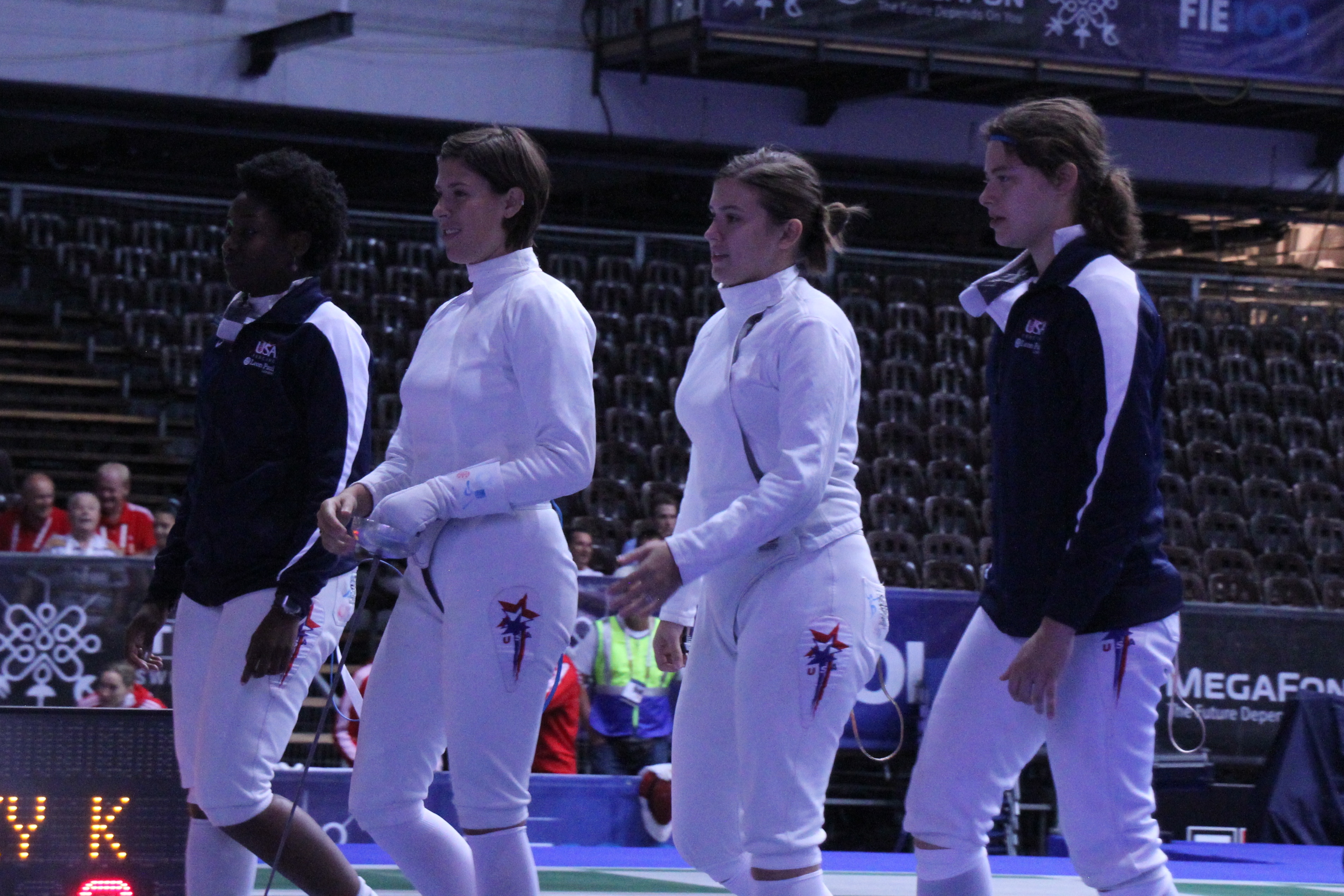 (Budapest, Hungary) – The saying always goes that “anything can happen in epee.” On Sunday, that proved to be true in the men’s competition at the Senior World Championships as many of the top teams were upset in the early rounds.

On the heels of a season in which the U.S. men’s squad won its first World Team Championship title in history, three of the four fencers on that team are no longer competing internationally and so two-time Olympian Soren Thompson (New York City, N.Y.) stepped into the role of anchor and was joined by three first-time Senior World Team members: Alex Tsinis (Little Neck, N.Y.), Adam Watson (Richford, Vt.) and Jason Pryor (Colorado Springs, Colo.)

After a bye into the table of 32, Team USA was tied with Denmark at 27 touches when Pryor came into the eighth bout and outscored Patrick Jorgensen (DEN), 13-5, to give Team USA a 40-32 lead going into the final bout. Thompson scored five on Frederik Von Der Osten to finish the win for the Americans, 45-36.

The loss was one of several key upsets during the day as Switzerland – the world #1 – fell in the table of 16 to the Czech Republic and France – who won the six Senior World titles before losing to Team USA in the finals last year – lost in the semifinals.

“If we would have won that match, we would have fenced Poland in the quarter-finals and we’ve beaten them before, but who knows what could have happened?” said Coach Benoit Bouysset (Colorado Springs, Colo.) “Korea’s a great team who would have been seeded higher, but they got the black card after the semifinals in Paris … and they lost in the 32. Estonia who has Novosjolov who won the individual, they lost to Egypt. There’s a lot of good teams here and maybe we could have won a medal, but that’s what happens.”

Fencing for ninth place, Team USA took on Switzerland in a match that some expected to see as a final round clash between the two highest ranked teams in the world. Led by Max Heinzer, the #3-ranked fencer in the world, and Fabian Kauter who took bronze in the individual event, Switzerland controlled the match from the start and held a 40-30 lead going into the final bout. Fencing Heinzer as anchor, Thompson tied final bout at five, but Switzerland took the victory, 45-35.

“They fenced well, but we need to be a little bit stronger. We need to increase our level. We might have one good touch, one not so good touch. The new guys on the team haven’t fenced enough at this level, but they’ve improved all season. They are smart enough to adjust when things they do aren’t working, but now we need to work on fencing more naturally without forcing any touch,” Bouysset said. “The team we had before stayed together for 10 years. It was Seth, Cody, Soren for 10 years and then Ben and a few others as fourth. But they had lots of experience together. Now we need to work on expanding to get a bigger group of guys in the mix and get them more experience for next season.”

With three touches to make up in the table of 16 match with France, anchor Courtney Hurley scored six against Lauren Rembi, but an injured Hurley was unable to finish the match and dropped 11 to Rembi as Team USA lost the match, 35-27.

“We were in a situation that we’re not particularly used to. We were forced not to fence the way we usually do. Courtney has an injury that precluded her from being able to really attack and a strong attacking style is key to how we usually fence, so what we really ended up with is a very counter-offensive plan and that’s not really how we fence and so we were forced to do something we don’t usually do,” said Coach Ro Sobalvarro (St. Paul, Minn.)

In the 9th – 16th place table, Lawrence came in as anchor and closed out the match against Poland, 45-44.

Team USA faced Hungary in the next match. Although the Hungarians led the match from the start, Team USA kept the match close and trailed by just two touches – 26-24 – going into the final bout.

Lawrence faced off against Emese Szasz who won bronze in the individual event on Thursday and had scored nearly half of Hungary’s total team points during her two appearances on the strip. Szasz outscored Lawrence, 10-3, and Hungary won the match, 36-22.

In the match for 11th place, Kelley Hurley picked up a total of 12 touches in two key bouts to keep Team USA within striking distance of Germany at 26-21 after the eighth.

Courtney Hurley returned to the anchor role in the final strip and was outscored, 16-13, by Beate Christmann. Germany finished the match with a 42-34 victory.

“Courtney was in a lot of pain, but she went out there and tried her best anyways. But, at the end of the day, she was hurting pretty badly,” Sobalvarro said. “With Poland, our revised strategy worked really really well. With Germany and Hungary, they saw what we were doing and refused to play into it. The girls certainly get an A+ for adaptability, but it was not a situation that was going to be successful.”

Although the team did not have the result they had hoped for, Sobalvarro is optimistic for the 2016 Olympic Games.

“For all the success we had last year, people forget that we started that quad 16th in the world and finished it with an Olympic bronze medal and ranked #3. That’s a pretty big jump. We’re starting in a better place and we know how to do it. We know how to win an Olympic medal. The first year after the Olympics is always a little off, but we’re confident we’re going to get back to the level we’ve achieved in the past,” Sobalvarro said. “We’ve got some younger people coming to challenge for those spots and I think it will only help and only push the athletes we have on the team harder. I think we’re starting this season so much better than four years ago.”

Competition concludes on Monday with the women’s saber and men’s foil team events.

Team rosters are as follows: