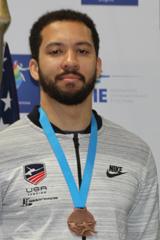 Ben Bratton is one of the most decorated men's epee fencers in the history of the United States.

A product of Queens, N.Y, Bratton made history when he became the first African-American fencer to win a World Championship title in fencing. Bratton was part of the U.S. men's epee team that won gold at the World Team Championships — a first for any USA men's fencing team.

He is a seven-time Team USA member and winner of a silver medal at the Pan-American Games in 2015. Bratton also founded Fencing 101, a youth enrichment program that teaches fencing at public schools and youth centers in Harlem and Brooklyn.

In 2020, he was named to the United States Olympic and Paralympic Committee Team USA Council on Racial and Social Justice, where he refines and provides recommendations to the USOPC to enhance oversight of racism and acts of discrimination within the organization.

Bratton currently teaches at the Fencing Academy of Philadelphia and is an assistant coach at New York University. In 2022, he was named the Division III Men’s Assistant Coach of the Year.