High School Coach of the Year Makes a Difference in Minnesota 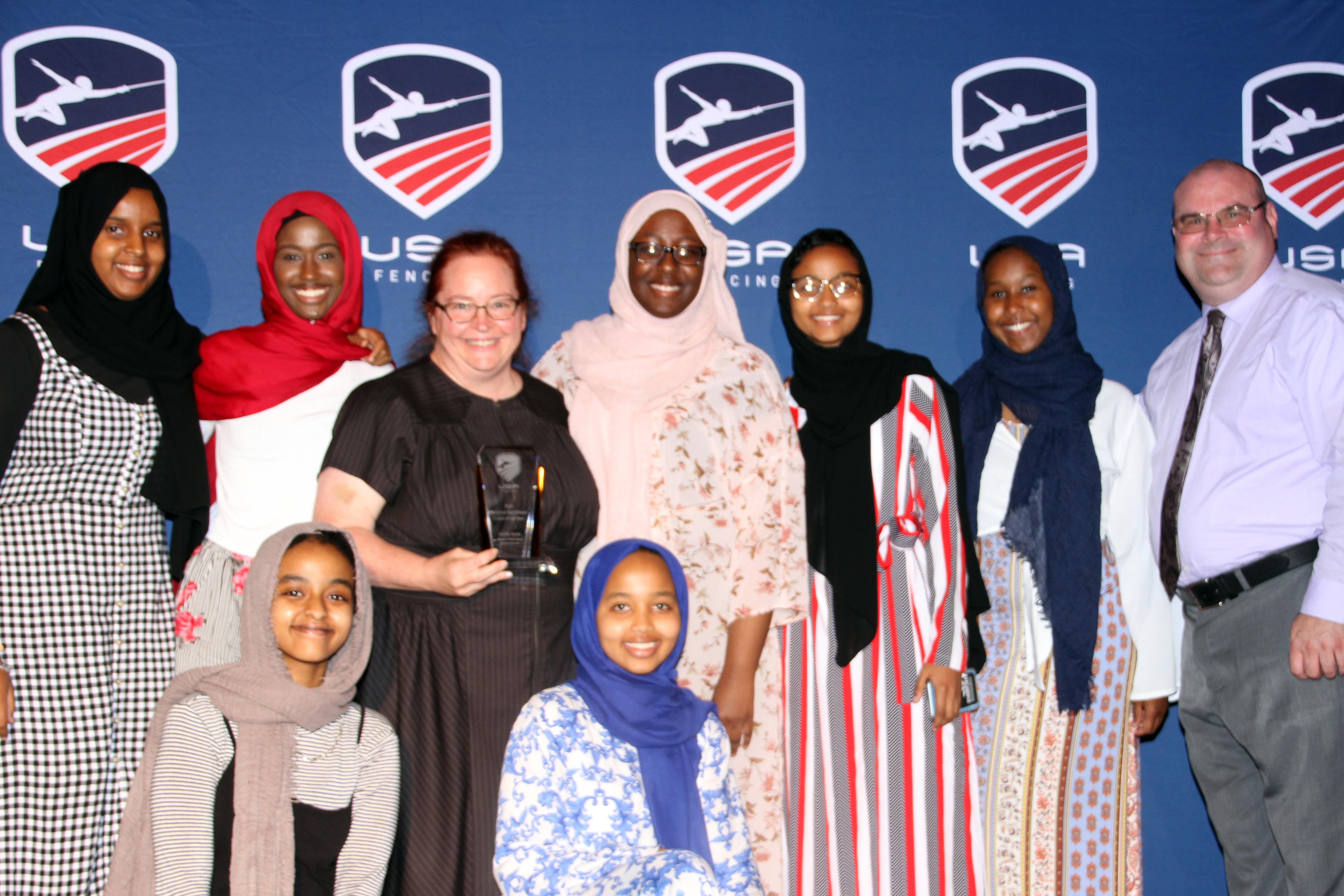 The Minnesota high school is more than 1,000 miles away from the East Coast hotbeds of varsity fencing, but Coach Corlis Hicks (Dover, Minn.) has built a state championship team of her first-time fencers at the tuition-free public charter school that serves primarily immigrant, minority and underprivileged students.

In just five years’ time, her students have gone from knowing nothing about the sport of fencing and not knowing how to stand in en garde to the women’s épée team winning the state championship in the 2018-19 season – the school’s first state title in any athletic activity.

“They’re reading who had fourth place and who had third place and I’m staring at my girls and they’re standing there, they’re relaxed, they’re getting their pictures taken, and it dawned on me, ‘oh my gosh, we’ve won first place,’” Hicks said. “The shock on all their faces followed by glee and the pride in what we’ve done … the huge smiles of we’ve arrived, we’ve proved something. And they’ve proved it to themselves, to the community that supports us … so for them, this was a validation that all their work, all their practice time, that they can be successful. Our school for the longest time, and continues to, battle the perception that we are the last-chance place for Somali kids and that’s not true. There’s a lot more going on here.”

In recognition of her contributions to the growth of high school fencing, Hicks was honored as the 2018-19 USA Fencing High School Coach of the Year during the USA Fencing High School All-Academic Ceremony at the National Championships and July Challenge in Columbus. Hicks is the third recipient of the award and was nominated by Albert Lee (Rochester, Minn.), the head coach of Rochester Youth Fencers, and Harold Buck (New Hope, Minn.), president of the Minnesota High School Coaches Association and the head coach at a competing high school.

In addition to the gold medal win at state championships, Rochester STEM’s women’s épée team also took third in the team relay and the team as a whole placed second. Individually, five fencers earned top-eight results – three in women’s épée and two in women’s saber – with three fencers qualifying for the Junior Olympic Championships as well as the July Challenge.

“One of the many reasons why the fencing team became successful in such a short amount of time was because of Mrs. Hicks. She made us believe that the sky was our limit and that there was nothing we couldn’t do,” said Faisa Mohamed (Rochester, Minn.), who took fifth in women’s épée. “She never let finance become a problem for us, covering most of traveling, food, lodging, equipment, tournament fees and much more. The only thing that were expected of us was to be safe, have fun and get a touch. She made something beautiful grow from something where there was previously nothing.”

Although Hicks had limited fencing experience – she took fencing in college – this allowed her to be a role model as she herself continued to learn the sport and better herself. She also worked with other fencing clubs and coaches in the area, such as 2012 Olympic Women’s Épée Coach Ro Sobalvarro (St. Paul, Minn.), noting the team effort it took to help her students improve and reach their achievements.

Not about the wins and losses or the stats, Hicks focuses on what her fencers do on the strip and how they carry themselves. She cares about her students as people as they develop and always ensures she spends one-on-one time with each fencer, asking what they need from her.

“She always said that we’re not fencers of medal, but of mettle, and with all of our ups and downs, her faith in us never wavered,” Mohamed said. “She’s a selfless being who always put others before herself. To us, Mrs. Hicks is not only someone we look up to, but more importantly, is our hero.”

Letting her students drive the team’s goals, she has instilled important life lessons such as working hard, planning ahead and developing strategies. As a motivator, she has created a positive environment that gives opportunities for her fencers to learn and try new tactics without being criticized.

“I won’t tell them what they’re doing wrong. What is your opponent doing right?” Hicks said. “As soon as you start to think ‘I can’t, I’m not,’ all those negatives, you’ll fulfill that prophecy. My coaching style is very much laidback … it’s making sure they have the confidence.”

As a result, Hicks has become more than a coach – something that is obvious not to just her students, but all of those around her.

“Corlis is not just a fencing coach to the fencers. She is the girls' life coach, academic coach and just like a second mother to them,” said Lee, the Rochester Youth Fencers Coach, in his nomination. “From a third party observer's perspective, I noticed the girls had grown dramatically in a positive way since I worked with them in the last two years.”