(Colorado Springs, Colo.) – USA Fencing is pleased to announce the 2019-20 season’s third group of recipients for the Spirit of Sport Recognition Program, recognizing six members of the fencing community who have exemplified outstanding dedication to the sport and are an inspiration to others.

The six recipients for the third quarter’s Spirit of Sport Award are as follows:

In addition, for the second straight season, USA Fencing will honor one annual Spirit of Sport winner. After the fourth quarter winners have been announced, a selection committee will name the top selection in each region as well as one wildcard choice from the pool of 24 winners named throughout the season. The fencing community will then select the winner from the final seven in an online vote available to the entire USA Fencing membership.

The overall winner will receive a trophy and will be honored at this year’s National Championships and July Challenge.

Nominations for the fourth quarter are due May 1. The nomination form can be found here. 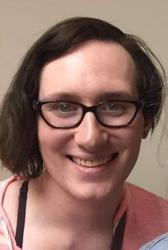 Toriana Shepherd runs and coaches at the University of Wyoming Fencing Club while being a full-time student. She truly looks to better her environment as well as all of those around her, whether at the university or in the community. Under her leadership, people of all backgrounds are welcomed and given the opportunity to thrive, and LGBTQ fencers have found a home at the club. A proactive leader, whenever trouble or conflict arises, Shepherd acts well beyond her years, staying calm and pragmatic.

“In the past three years that Toriana Shepherd has been involved with UWFC, she has demonstrated remarkable dedication to the club and its success, as well as that of its members,” Kentzie Bernabeu said. 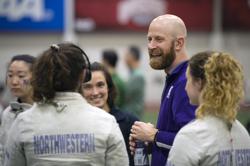 The best coaches not only instruct their own students, but inspire the next generation of leaders in the sport as well. Lucia Procoprio didn’t think she would become a coach, but the four-year fencer at Northwestern has gone on to become an assistant coach at Wayne State as a result of the leadership and positive role modeling from Eric Momberg. The assistant coach at Northwestern, Momberg knows sports are about much more than medals and winning, but are an opportunity to help people grow and teach skills and develop character traits that last a lifetime, serving his students in all areas of their lives. With the desire to see his students be the best fencers and people they can be, he emphasizes teamwork, respect, mindfulness and self-expression. Momberg works to grow the sport and when Procoprio decided she wanted to be a coach, Momberg didn’t hesitate to give extra coaching lessons to help her excel in her new passion.

“More than medals and championships, sport is about becoming the best version of yourself you can be. Eric believes in coaching not just the fencer, or even the athlete, but the whole person,” Procoprio said. “He is creating not just good fencers, but good people.” 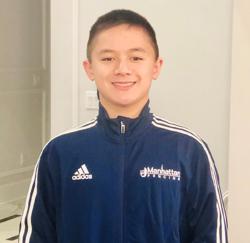 After seeing fencing on an episode of “Tom & Jerry,” when he was 3 ½ years old, Huang set his sights on wanting to try the sport. Although his parents told him he was too young, Huang was persistent, asking every six months to fence and letting his parents know for his sixth birthday he didn’t want any presents – just the ability to fence. The second he received the green light, he took his first lesson and fell deeper in love. He built a special bond with his first coach, Michael D’Asaro, Jr., which lasts to this day. During his fencing career, Huang has overcame many obstacles, including a car crash in which he suffered a cervical spine injury just six weeks before the National Championships, as well as moving across the country and having to switch clubs, coaches and make new friends. Through it all, Huang’s love for fencing has never waned. The word “no” isn’t in his vocabulary and he has only continued to work hard to improve.

“He sets goals each season for his fencing progress, never faltering from achieving them,” Danielle Rudolph said. “He’s passionate, resilient, and goal-driven.” 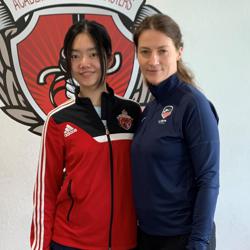 From the moment Audrey Chu started at Academy of Fencing Masters, she’s made a positive impact. She is extremely hard working and determined to do her best, always giving 100% in all practices, lessons and classes. Chu is respectful of all and shows incredible sportsmanship, understanding that each bout can teach a lesson and every fencer can give a new perspective. She relentlessly encourages her teammates and supports them when they’re down. Her example of being a great teammate is inspirational to those around her as she is kind, but also strong. Chu is humble and always puts the team above herself. They say a smile is contagious, and Chu’s positivity has spread throughout the club.

“We so much appreciate Audrey's impact on our community of kids, parents, and coaches,” Irina Chirashnya said. “Her spirit is an example of the best practice in the sport with big dreams and great plans for the realization of these dreams!” 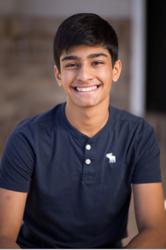 Ayush Deshmukh lives and breathes the sport of fencing. Wanting to spend as much time with the sport as he can, he not only spends many hours fencing, but is a referee and volunteer as well. At the club, he is an incredible teammate, as he fences and mentors the younger fencers. Deshmukh has also helped with charitable initiatives at the club, bringing the club together to support the community. Recently, he worked with his coach on a charity backpack event, supplying the homeless with basic necessities such as blankets and hygiene products. At home, the fencing doesn’t stop as Deshmukh is constantly air fencing with his brother and parents.

“From the day he started fencing, he has loved it and has become a dedicated ‘for life’ fencer,” Deshmaukh said. “Ayush plans to continue fencing right through college and beyond as he has a true passion and love for the sport and shows tremendous dedication in spite of his very heavy school workload.  Ayush will try to do his homework from school in the car on the way and back from fencing just so that he does not have to compromise on the time he spends associated to fencing.” 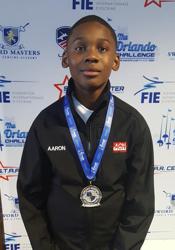 Although Aaron Love tried the sport of fencing at the age of five for medical reasons – he has severe allergies that prevent him from playing sports outside – it was love at first sight. He practices four to five days a week, with a schedule that includes running on the treadmill prior to practice, working on his footwork after dinner at home and air fencing constantly. Always respectful of everyone in the club as well as his opponents and referees, Love is an example and leader to all, especially the new fencers. He is available to help the coaches every chance he gets and only wants all those around him to see how wonderful the sport of fencing is.

“I nominate Aaron Love for his commitment and dedication to the sport,” Phyllis Love said. “He is a dedicated student and shares his love for fencing with his school and friends.”