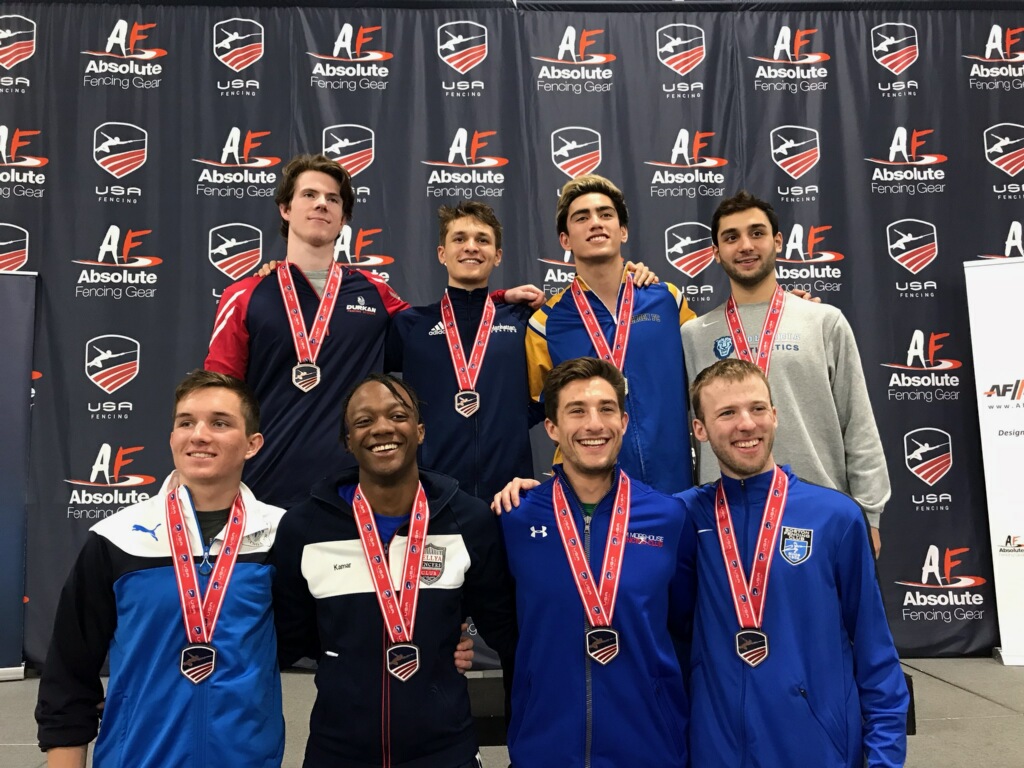 (Colorado Springs, Colo.) – It’s been quite a week for Mitchell Saron (Ridgewood, N.J.)

The title marks Saron’s first Division I title on the North American Cup circuit and his first win since 2016 when hear earned gold as a cadet at the October NAC.

After holding his first two opponents to single digits at 15-8 and 15-7, Saron advanced to the quarter-finals with a 15-11 victory over Andrew Johnson (Ridgewood, N.J.)

Down 2-1 in the semifinals to Grant Williams (Atlanta, Ga.), Saron scored seven straight touches to take an 8-2 lead at the break. Continuing his momentum in the final period, Saron took the first two touches and went on to win, 15-10.

In the final, Saron fenced his teammate from the 2018 Junior World bronze medal winning team, Andrew Doddo (South Orange, N.J.) With Doddo up, 8-4, at the break, Saron scored four of the first five touches in the second period to cut Doddo’s lead to one at 9-8. Doddo responded with a point, but Saron went for five straight to take a 13-10 lead and earned the gold, 15-13.

National Championship titles also were awarded in the wheelchair men’s and women’s foil events with Will Chase (Dacula, Ga.) and Shelby Jensen (Salt Lake City, Utah), both of whom won their first national title yesterday in épée, returning to the top step of the podium again Saturday in foil.

Chase, who competed in his first wheelchair competitions in January, was a perfect 12-0 in pools to receive a bye to the semifinals, where he controlled his bout against Josh Russell (Mendenhall, Miss.), 15-3.

Chase’s opponent in the final would be 2018 Americas Championships gold medalist, Byron Branch (Bellbrook, Ohio). Branch jumped out to a 3-0 lead, but Chase evened the score at six. Still tied at 11, Chase went on a 3-1 run to come within one point of a second National Championship title. Branch didn’t relent, scoring two straight points to tie the score at 14, but Chase earned the decisive touch for a 15-14 victory.

Competing in her hometown, Jensen won her first gold at a NAC and she now has a gold medal in each weapon.

Like Chase, Jensen was undefeated in pools at 8-0 and moved directly to the semifinals, nearly earning the shutout against Anna Kennedy (Ogden, Utah), 15-1.

Patricia Dykes (Gulf Breeze, Fla.) brought home the bronze next to Kennedy on the podium.

Nellya built a 25-15 lead after five bouts and although AFFA won the final four, it wouldn’t be enough to catch Nellya which won the match, 45-42.

As part of the April North American Cup, gold medals were awarded in the men’s épée and women’s foil events.

His fifth straight podium finish in the category, Taylor won his first two bouts 10-5 before overcoming Chuck Alexander (Escondido, Calif.) in the quarter-finals, 10-8.

A  2018 Vet World Team Champion then came up with two clutch performances for his first NAC win since December of 2016, outtouching Ridge, 10-9, and Dragonetti, 5-4.

He would need two 10-9 victories to take the top step of the podium, earning one over Keith Lichten (Oakland, Calif.) in the 16 after he had defeated Eric Rhea (Johnston, Iowa) in the 16.

Tepedelenlioglu then secured a spot in the final with a 10-7 victory over Scott Rostal (Saint Paul, Minn.) and pulled out the 10-9 victory over Eric Pho (Eastchester, N.Y.) for gold.

On the women’s side, two-time Pan American Games medalist Julie Seal (Eagle Mountain, Utah) won gold in veteran 40-49 women’s foil, her fifth at the last six national tournaments in which she has competed.

Seal went 5-0 in pools and gave up no more than five points in the direct elimination rounds, starting with a 10-4 victory over Susan Hazel (Irmo, S.C.), 10-4.

Cruising past Lesley Chapman (Earlville, N.Y.), 10-3, in the semis, Seal made her return to the top step of the podium with a 10-5 win over Rachel Fedde (Brooklyn, N.Y.)

With a 10-7 victory over Totemeier, Botelho advanced to the gold medal match and overcame Hennig-Trestman, 10-6.

After a 10-3 victory over Sharone Huey (Brooklyn, N.Y.) and a 10-5 win over Offerle, Walters fenced a tight bout in the final, outtouching Starks-Faulkner, 8-7.

Competing in her second veteran +70 women’s foil competition, Muriel Cawthorn (Rehoboth, Mass.) won the gold, her first in the event.

In the veteran open men’s foil event, Kwangsuk Chung (KOR) came out on top of three medalists from Friday’s competition.

The No. 1 seed out of pools, Cano-Diosa had several close bouts early, including a 9-8 win in the table of 16 over Michele Chimieti (Temple City, Calif.), who won bronze in the 40-49 event on Friday.

Samuel Morris (Commack, N.Y.) also earned a spot on the podium with bronze.