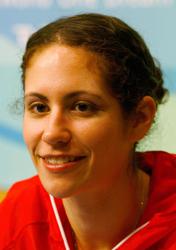 One of Team USA’s most successful fencers in history, three-time Olympic medalist Sada Jacobson (Atlanta, Ga.) has been named to the USA Fencing staff as the U.S. Women’s Saber National Team Manager.

During her athletic career, Jacobson earned individual silver and bronze medals at the 2004 and 2008 Games and team bronze in 2008. The five-time Senior World medalist also was the first U.S. woman to earn the No. 1 world ranking in any weapon – a feat she achieved in 2003 en route to earning the first of two Overall World Cup titles.

In her new role, Jacobson will work with U.S. women’s saber national team members as well as their coaches and the USA Fencing sports performance staff to ensure that athletes have the resources necessary to succeed at the highest level in preparation for the 2020 Olympic Games. This will include serving as a liaison between athletes and staff as well as planning training camps, working with sports science and medicine teams and serving as the women’s saber head of delegation at designated international tournaments.

"I'm incredibly excited to be part of the women's saber squad again – this time as manager. I have deep admiration for our athletes, who are extraordinarily accomplished and driven women, both on and off the strip, and I'm looking forward to cheering them on as they do great things this season,” Jacobson said.