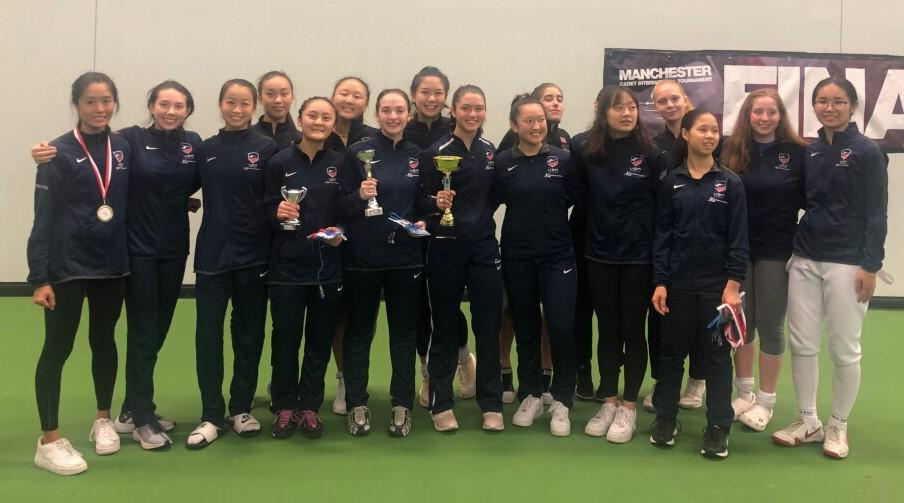 On a day where all 20 members of Team USA made the 32 and five made the quarter-finals, Rhodes went 1-2-3 with Renata Chusid (Franklin Lakes, N.J.) and Vivian Zheng (Amherst, N.Y.) for a near sweep of the podium.

Undefeated on the day, Rhodes gave up no more than 10 points to an opponent. After going 6-0 in pools, Rhodes earned the No. 1 seed and a bye into the table of 64, where she cruised past Barbara Boda (SVK), 15-3.

In the table of 32, Rhodes nearly completed a shtout, overcoming Martha Bird (GBR), 15-1.

Rhodes reached the quarter-finals with a 15-9 win over Karen Biasco (ITA), leaving three teammates in Rhodes’ path to gold.

With a convincing 15-4 victory over Chusid in the final, Rhodes claimed gold in Manchester for the second straight year and kept her No. 2 ranking in the USA Fencing National Rolling Point Standings.

Her best result at a Cadet European Cup, Chusid went 6-0 in pools before outtouching Lauren Yan Faye Tang (MAS), 15-14, in the table of 64.

Following 15-10 and 15-11 victories over teammates Catherine Flanagan (Pleasantville, N.Y.) and Alexandra Jing (West Roxbury, Mass.), Chusid overcame Carolina Stutchbury (GBR) and Aurora Grandis (ITA) by 15-10 scores to secure an All-American final and move up to No. 3 in the Cadet European Fencing Rankings and No. 4 in the Rolling Point Standings.

Competing at her first international tournament, Zheng started her route to bronze by going 5-1 in pools and taking a quick 15-4 victory over Ava Emanuel (NED).

With a 15-10 victory over Cheng in the quarters, Zheng secured a medal before coming up short to Rhodes.

Cheng also was fencing at her first Cadet European Cup, advancing to the 16 with a pair of 15-7 wins over Bronwen Hyde (GBR) and Katherine Apelian (Boonton, N.J.)

In the table of 16, she won her second consecutive bout over a teammate, earning a 15-11 victory over Allison Lee (Kinnelon, N.J.) Lam now ranks No. 3 in the Rolling Point Standings.