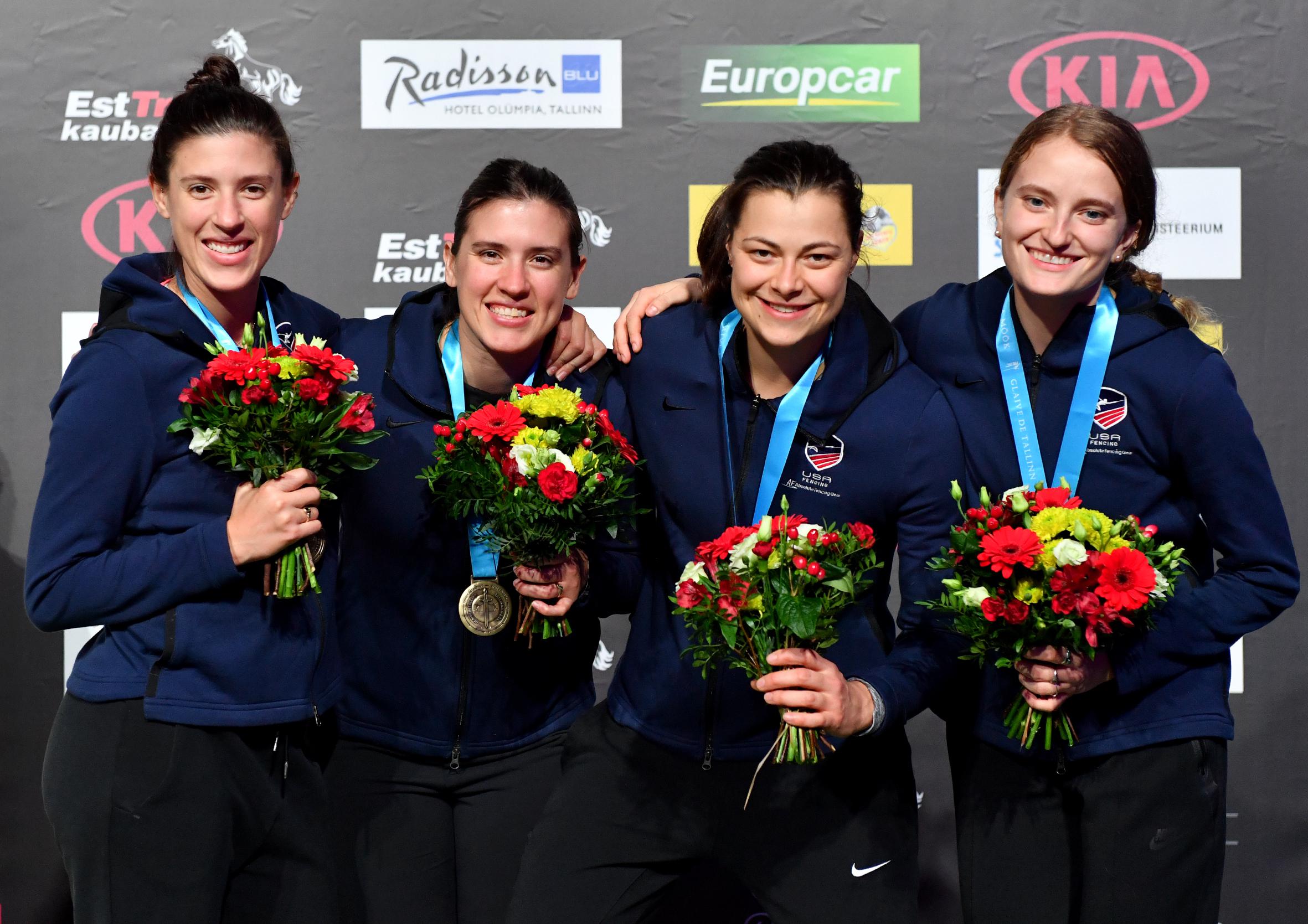 (Colorado Springs, Colo.) – The U.S. Women’s Épée Team put itself one step closer to Olympic qualification and its quest for a podium position in Tokyo on Sunday with a bronze medal finish at the Tallinn World Cup in Estonia.

The U.S. Women’s Epee Team now sits in the No. 4 position in the Olympic Qualifying Rankings after a win in the finals over China who is both the reigning Senior World Champions and the No. 1 team in the qualifying rankings.

The Americans opened the competition with a 45-25 win over Austria in the table of 32 to advance to the table of 16 against Japan. Although Japan kept the score tied at five after the first two bouts, Holmes, van Brummen and Courtney Hurley won or tied six of the next seven bouts to close the match with a 39-34 victory.

Team USA took on Estonia in the quarter-finals in a match of former World Champions with the Americans holding the 2018 title and Estonia winning in 2017. Estonia held a 12-9 lead after the first four bouts, but van Brummen cut the lead to one at 20-19 with a 10-7 win over 2014 Junior World Champion Katrina Lehis. In the sixth, Holmes bested 2013 individual Senior World Champion Julia Beljajeva, 2-1, to tie the score at 21. Van Brummen outscored 2017 Senior World Team Champion Kristina Kuusk, 6-1, to give the Americans a 27-26 lead which Kelley Hurley built on in the setup bout, taking out Beljajeva, 3-1, to give Holmes a 30-27 lead going into the anchor bout against Lehis. Holmes got to work quickly, scoring seven singles against Lehis for a 38-30 lead and going on to finish the match with a 44-38 victory.

In the semifinals, however, Team USA was outmatched by top-ranked Russia. Courtney Hurley and van Brummen secured one individual bout win each as the Russians claimed the win, 45-29.

The bronze medal match would be a different story as the Americans took on China – a team that not only won gold at the 2019 Senior World Championships, but is led by three of the top nine individual fencers in the world in Sheng Lin (No. 2), Yiwen Sun (No. 6) and Mingye Zhu (No. 9). In addition, Sun and Zhu also earned bronze medals in the individual competition on Saturday.

Holmes and Kelley Hurley each posted wins against Lin, the reigning Senior World individual silver medalist, in the second and sixth bouts with Courtney Hurley splitting a 6-6 bout against Lin in the fourth. Kelley Hurley and Holmes each bested Zhu by 5-3 margins in the third and sixth bouts before she was replaced by 2015 Senior world bronze medalist Anqi Xu who Courtney Hurley defeated, 6-5, in the eighth. After seven wins in the first eight bouts, Holmes took the strip against Sun – the 2016 Olympic bronze medalist who van Brummen defeated, 5-4, in the opener, but Kelley Hurley dropped the fifth to by a 3-1 score. Holmes held on against Sun, clinching the victory at 43-35.

The Americans remain ranked No. 4 in the World Rankings as well as the Olympic Qualification Rankings with China, Poland and Russia holding the top three positions in the Olympic Rankings. The top four teams in the world as of April 1, 2020 will earn berths to the Olympic Games with four additional positions being awarded to the highest ranked team in each zone. Currently, the U.S. team is favored to secure the slot with the next highest ranked Pan American nation being Canada in 13th. Should Team USA remain in the top four at the end of the Olympic qualification period, the Pan American zone would place two women’s epee teams in the Olympic field for the first time in history at a Games not hosted by a nation in the zone.

On Saturday, Team USA saw eight of 12 U.S. fencers advance to the second day of competition, earning Olympic qualification points by advancing to the top 64, including top-32 results by the Hurley sisters.

Exempt from pools due to her No. 13 world ranking, Kelley Hurley advanced directly to the table of 64 where she faced teammate Isis Washington (East Orange, N.J.) – a gold medalist at the October North American Cup who is aiming to qualify for her first Olympic Team. Washington built a 5-3 lead midway through the first period, but Hurley came back to tie the score at five and end the period at 6-6. With the score tied at seven in the second period, Hurley made her breakaway, scoring five straight singles in less than a minute. Washington was unable to make up the touches and Hurley held on to a 15-11 win.

Fencing 2015 Pan Am bronze medalist Leonora Mackinnon (CAN) in the table of 32, Hurley took a 10-9 lead after the first period, but the Canadian reeled off four straight singles in the second to take the win, 15-11. Following her second career win over the 2012 Olympic team bronze medalist, Mackinnon went on to earn her first top-eight result at a World Cup.

Courtney Hurley fenced the pool rounds on Friday, but the 2012 Olympic team bronze medalist faced little challenge from her opponents, winning six straight to advance directly to the table of 64 against Kristina Kuusk. After a conservative opening period in which she took a 4-2 lead, Hurley ended the second with a 3-1 run and a 12-7 lead. Kuusk scored first in the third, but Hurley replied with three singles to win the bout, 15-8.

In the 32, Hurley matched up against two-time Olympic medalist Ana Maria Popescu (ROU) for the first time since the Romanian defeated Hurley by a single touch in the semifinals of the 2018 Senior World Championships. With the score tied at five after the first period, Popescu held Hurley to a pair of singles and two doubles in the second as she finished the bout, 15-9, and went on to win gold.

The wins allowed the Hurleys to remain No. 1 and No. 2 in the nation. The sisters also are the top two fencers in Olympic qualifying points. Kelley Hurley also moved up to No. 12 in the world with Courtney moving up to No. 16 and an exemption from the pool rounds when the circuit resumes in Havana in January.

Holmes was Team USA’s top finisher in pools with a 6-0 result, and controlled her table of 64 bout against Olga Lukianova (RUS), building a 10-6 lead in the third period. Lukianova scored twice more, but it was a pair of singles by the Russian in the final six seconds of the period that sent the bout to overtime at 12-12. Both athletes showed patience in the overtime period, but it was Lukianova who picked up the first single for a 13-12 win with 15 seconds on the clock.

Among this year’s candidates for Tokyo are a pair of high school seniors who are balancing college applications with attempts at qualification for both the Olympic Games and the 2020 Junior World Championships in Tokyo.

Despite being just 18 years old, 2018 Cadet World silver medalist Emily Vermeule (Cambridge, Mass.) has earned top-64 at four of the five senior international tournaments in which she has competed in 2019. Vermeule went 6-0 in pools and fenced a close first period of her 64 bout against Sera Song (KOR), trailing by just two at 4-2. Song controlled the second period, however, and entered the third with a 13-5 lead before closing the bout at 15-6.

Candreva became the youngest U.S. women’s epee fencer in history to win an individual medal at the Junior Worlds this year when she earned bronze at 16 years old and earned a position in the 64 at her second senior international event with a 5-1 finish in pools. Candreva fenced 2018 Cadet World Champion Kaylin Sin Yan Hsieh (HKG) in the 64 and held the score at a 2-2 in the first period, but Hsieh held Candreva scoreless in the second to take a 5-2 lead. With a 7-4 lead going into the final minute, Hsieh outscored Candreva, 8-5, to end the bout at 15-9.

Van Brummen, the 2017 NCAA Champion for Princeton, ended the pools at 4-2 and needed a pair of direct elimination bout wins to qualify for the second day of competition, defeating Darja Varfolomyeyeva (UKR), 15-6, and Maia Guchmazova (GEO), 15-12, in the preliminary rounds. Van Brummen drew Olena Kryvytska (UKR) in her opening round on Saturday, fencing the 2017 and 2019 Senior World bronze medalist for the first time in a direct elimination bout. The round got off to a fast start with van Brummen staying within two touches until Kryvytska pulled away at 14-10 at the end of the first period. Kryvytska took a single 14 seconds into the second to win the bout, 15-10.

After qualifying for her first Senior World Team this year, three-time Junior World medalist Kasia Nixon (Los Angeles, Calif.) is in the hunt to qualify for her first Olympic Team after winning the 2018 NCAAs for Princeton. Following a 2-3 finish in pools, Nixon rebounded with three straight wins in the preliminary direct elimination tables, defeating Paula Schmidl (AUT) and Auriane Mallo (FRA) by 15-9 scores and qualifying for the 64 with a 15-12 win over Aurore Favre (SUI). Nixon fenced Vivian Kong (HKG), a 2014 NCAA Champion from Stanford who is now No. 1 in the world. Kong took a 5-2 lead in the first period and ended the second at 12-4. Nixon scored three singles in the third, but Kong closed with a 15-7 win.

As the race for Tokyo qualification continues to ramp up, Nixon, van Brummen and Holmes sit within 120 Olympic qualification points of each other in 3-4-5 and behind Courtney and Kelley Hurley who hold the top two positions currently. The top three fencers in the USA Fencing National Point Standings at the conclusion of the 2020 USA Fencing National Championships on April 19, will earn individual berths to the Tokyo Olympic Games with the fourth athlete earning a position as a replacement athlete for the team event only.