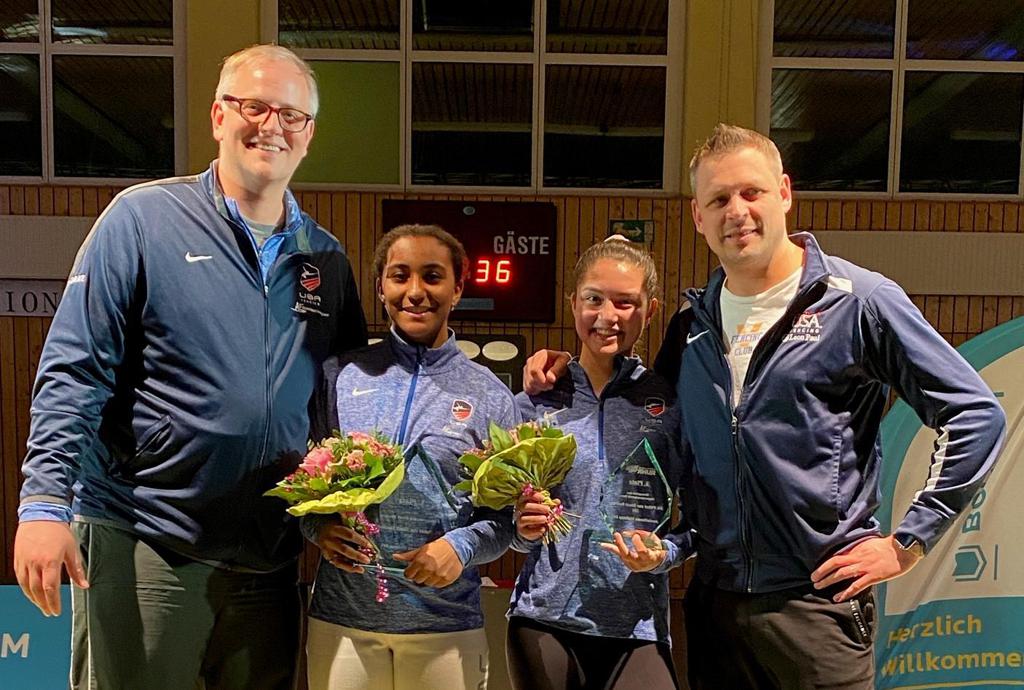 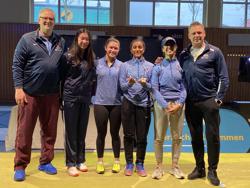 (Colorado Springs, Colo.) – Team USA junior women’s foil is sending a message to the world about its strength and depth to start 2020.

Team USA has won five gold medals on the Junior World Cup circuit to begin 2020, including individual titles by Scruggs, Rhodes and May Tieu (Belle Mead, N.J.) as well as two team golds. The only junior women’s foil title the Americans haven’t claimed in 2020 was in Udine, Italy in which the U.S. did not compete due to a schedule conflict with the January North American Cup.

Scruggs, the 2019 Junior and Cadet World Champion who won her first Junior World Cup title, has now medaled at the last two Junior World Cups in which she’s competed at and is the third U.S. fencer to win gold this year after Tieu topped the podium in Zagreb and Rhodes claimed gold in San Jose.

With the gold, Scruggs officially locked her spot on the 2020 Junior World Championship Team and will have the opportunity to defend her title in front of a home crowd when the Junior and Cadet Worlds are held in Salt Lake City from April 3-11.

A 2018 Junior World Team Champion with Scruggs, Tieu remains second in the USA Fencing Junior National Team Point Standings, followed by 2019 Cadet World Team members Maia Weintraub (Philadelphia, Pa.) and Rhodes, who are third and fourth, respectively, with two international tournaments remaining in the qualifying period. Four fencers can qualify for the U.S. team that will compete at the 2020 Junior Worlds with three fencers eligible for the Cadet World Team.

Now No. 2 in the FIE Junior World Rankings, Scruggs’ started her day 6-0 in pools to take the No. 2 seed and a bye to the table of 64, where she overcame Alice Gambitta (ITA) by a 15-13 score – the first of three straight wins over Italians.

Following dominant 15-4 and 15-9 efforts over Carlota Ferrari (ITA) and Giulia Amore (ITA), respectively, Scruggs advanced to the final with two victories over her two teammates on the 2019 Cadet World Team.

The 2018 Junior World Team Champion first edged out Weintraub, 15-11, before besting Rhodes by the same score.

After going 5-1 in pools, Rhodes dominated her first five direct elimination bouts to reach the semifinals, holding all to single digits.

Rhodes gave up a combined three points to Emily Beardmore (GBR) and Olga Sopit (UKR) to advance to the table of 32, where she controlled the bout against 2019 Junior World Team member Tinney Mak (CAN), 15-9.

With a 15-8 victory over two-time Senior World Team member Anna Taranenko (UKR) and a 15-7 win over Vitalina Anaschenkova (RUS), who won bronze at the London Junior World Cup earlier this season, Rhodes guaranteed a medal.

Weintraub, who stood next to Anaschenkova on the podium in London, earned her second straight top-eight result.

In the table of 32, Weintraub posted a 15-8 victory over three-time Junior World Team member Alina Poloziuk (UKR) and she reached the quarters, where she would face Scruggs, with a 15-9 victory over Eleonora Candeago (ITA).

Entering the tournament as the sixth seed, the United States now ranks No. 3 in the world and has not dropped a match in 2020.

The Americans won their first six bouts in the table of 16 against Turkey to take a commanding 30-10 lead, going on to win, 45-24. Scruggs led team USA with a +12 indicator.

In the quarters, Team USA didn’t drop a bout for its most dominant effort of the day, defeating Poland, 45-15. DeVore, Scruggs and Rhodes all went at least +8 with DeVore tallying a +13 indicator.

Facing a 4-3 deficit after the first bout against Hungary in the semis, Team USA won the final eight and led by Rhodes, who went +9, advanced to the final, 45-23.

Fencing for gold, Team USA jumped out to a 20-point lead entering the final two bouts and the cushion would be big enough for gold as Team USA went on to win, 41-25. DeVore won all three of her bouts for a +10 indicator.