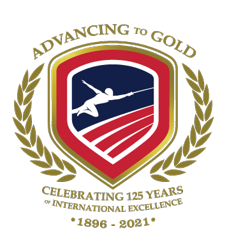 (Colorado Springs, Colo.) – In looking forward to the Olympic Games in 2021, USA Fencing is excited to announce Advancing to Gold: Celebrating 125 Years of International Excellence, a three-day celebration marking the one-year countdown to Tokyo and honoring the achievements over the last 125 years on the world’s biggest stage.

With the Opening Ceremony originally scheduled to take place on July 24, 2020 prior to the postponement and now rescheduled to July 23, 2021, from July 23-25, Advancing to Gold will celebrate the past, present and future of fencing.

One of five sports to be contested at every modern Olympic Games since 1896, the three-day extravaganza will honor the excellence achieved in the last 125 years, in which USA Fencing has seen 50 athletes reach the Olympic podium.

Advancing to Gold will feature virtual panels, interviews, games and more with participation from Olympic hopefuls as well as Olympians across five decades.

Fencing fans will have the opportunity to hear the stories of past, present and future Olympians on USA Fencing’s platforms over the course of three days, including the following live sessions:

Tokyo Olympic hopeful Iman Blow (Brooklyn, N.Y.) explores the past, present and future of fencing on the international stage with interviews from Olympic medalists Peter Westbrook (New York, N.Y.) and Daryl Homer (New York, N.Y.) as well as 2016 Olympian Jason Pryor (South Euclid, Ohio) and 2019 Junior and Cadet World Champion Lauren Scruggs (Ozone Park, N.Y.) Westbrook became the first African-American to medal in the sport of fencing in 1984 and Homer followed with a silver medal in 2016. Pryor is a five-time Senior World Team member and two-time Pan American Games medalist while Scruggs is one of Team USA’s rising stars after she became the first U.S. foil fencer ever to win junior and cadet titles at the same Worlds. Topics that will be discussed include making history, their careers and why representation matters in the sport.

Olympic and Paralympic hopefuls will answer pre-submitted questions and discuss their journey toward qualifying for their first Games.

Join 2016 Olympic team bronze medalist Monica Aksamit (Matawan, N.J.) as she takes you through a workout that will get your heart pumping and have you excited for the year ahead.

Additional participating athletes will be announced in the coming days. More information about Advancing to Gold can be found at https://www.usafencing.org/advancing-to-gold.