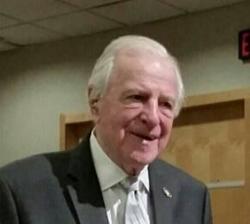 (Colorado Springs, Colo.) – The international fencing community lost an influential member of the fencing family on Tuesday with the death of Chaba Pallaghy (Milford, Pa.) at 88 years of age.

A vice president for the Amateur Fencers League of America (now USA Fencing) from 1972-76, went on to serve as an executive committee member for the Federation Internationale d’Escrime from 1981-1996, including a term as executive vice president from 1993-1996. He also served as president of the FIE Arbirtrage Commission from 1992-1996 and is a member of the FIE Hall of Fame. In 2003, Pallaghy was honored by USA Fencing with the Jack Baker Award for Service to USA Fencing.

After emigrating from Hungary to the United States in 1957, became one of the top saber fencers in the nation during his time and would go on to serve as a mentor to generations of athletes, coaches, referees and administrators of the sport – both in the United States and abroad.

In 1963, Pallaghy earned both individual bronze and team gold, but his career would be cut short by an injury to his Achilles tendon.

Following his retirement from competition, Pallaghy became an outstanding referee, earning his A rating in all three weapons, and was a fixture at the Olympic Games for three decades, serving either as an Olympic referee or a member of the directoire technique in 1972, 1976, 1984, 1992 and 1996.

It was at the 1984 Olympic Games in Los Angeles that Pallaghy sat in the front row as Peter Westbrook (New York City, N.Y.) won bronze – the first medal for the United States in more than 20 years.

“He was in the first row when I was in the finals and you should have seen it. Chaba was so nervous, he was on the edge of his seat and he was ready to fall out of his chair,” Westbrook remembered.

The achievement was not only one for Westbrook and the nation, but a special moment for Pallaghy who referred to Westbrook as his “favorite son.”

In addition to being the father to his own daughters, Cassandra and Susie, Pallaghy had such an influence on members of the saber community during that generation that he referred to several as his “sons.”

“Chaba had many people he called his sons in fencing, but my title is ‘my favorite No. 1 son’ and having that wasn’t an Academy Award title, but pretty close to it!” Westbrook laughed. “We just had such an intimacy that we’d share – like we’d be in Italy walking arm and arm down the street. We spent a lot of time together over the years, but I’m just so so glad that we had the opportunity to honor Chaba Pallaghy five years ago. We did a dinner to celebrate the 25th anniversary of the foundation and we honored Chaba and Jack Keane. All of the New York Olympians were there and Chaba had had a mini stroke before that, but it was such a moment to be able to recognize them both before they died.”

Pallaghy influenced countless referees from throughout the United States and around the world, including Russ Wilson (Springfield, Va.) who followed in Pallaghy’s footsteps, becoming a AAA-rated referee.

“He was like a second father to me and I can tell you that, without Chaba, there’s no possible way I would have made it as far as I did in the FIE. He pushed me, he goaded me … before I’d do a World Cup final, he’d say crazy things to rile me up, but he made me tough as nails because he was tough as nails,” Wilson said. “It’s like the end of an era having Chaba gone. I spoke to him every day for the last six weeks. And for the last six weeks, I would say ‘I love you Chaba Bacsi,’ which is Hungarian for uncle, and all he could say is ‘I love you Russell’ and that was it.”

Wilson said that Pallaghy was influential in increasing the opportunities for women in refereeing – fiercely advocating for the inclusion of women at the highest levels as well helping to increase the number of opportunities for referees from nations that were under-represented at the time.

“Chaba ensured that women were used as presidents of juries in the FIE. He also ensured that the Pan American and Asian countries had not only their share of highly rated referees, but that they’d receive their due,” Wilson said. “He was always looking to protect everyone and make sure they could succeed on their own merits.”

Pallaghy also was a strong proponent of increasing the number of coaching opportunities for women, including Charlotte Remenyik, a native of Hungary who became the first woman to coach a men’s varsity team at Ohio State University in 1980.

Alongside Westbrook and Wilson, Pallaghy also referred to former USA Fencing President Donald Anthony Jr. (Columbus, Ohio) as one of his sons with the two developing a close bond over the years as Pallaghy inspired Anthony who also went on to become a vice president of the FIE.

“Chaba was my father in the world of fencing. He is the main reason that my involvement in fencing continued over the many years. His influence and encouragement to become an officer of USA Fencing and his support of OSU Fencing Head Coach Charlotte Remenyik is what led me to the various roles I have played in our sport,” said Anthony who is now the head coach at Ohio State University. “His presence was so important in the growth of USA Fencing and his impact laid the foundation for where USA Fencing is today.”