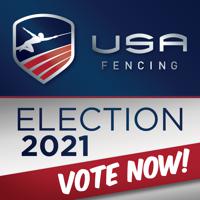 Update: On May 12, the USA Fencing Election Committee announced the extension of the deadline to vote through May 21.

(Colorado Springs, Colo.) – The USA Fencing Board of Directors Election opened for voting on May 5th with voting open through 5 p.m. MDT on May 21.

Eligible voters received their login information for the electronic email on May 5. To be eligible to vote in the USA Fencing Board of Directors Test Election, individuals must have been age 18+ and held a valid membership with voting rights as of February 1, 2021.

Candidates for the two open At-Large Director positions are as follows:

Voters rank the candidates by preference, which adds the specified number of points to each candidate's running total.  (Candidates not ranked by a voter do not get any points from that voter's ballot.)  At the conclusion of the election, the total number of points earned by each candidate is reported.  The two candidates earning the most points will be elected to the two At-Large Director positions.

If you need additional assistance, please contact eBallot at help@eballot.com or the USA Fencing National Office at information@usafencing.org.