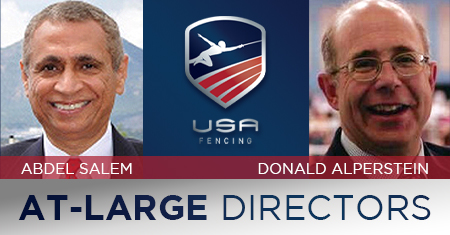 (Colorado Springs, Colo.) – USA Fencing is pleased to announce the winners of the Board of Directors Election which concluded on May 21.

This will be the first term on the board for Salem who retired in 2019 after 22 years coaching at the United States Air Force Academy. Salem, who also serves as a referee, was a 1984 Olympian for Egypt and previously served as president of the United States Fencing Coaches Association.

Alperstein, served as USA Fencing’s board president from 1996-2000 and was elected to his third straight term as an At-Large Director. A national and international referee, Alperstein also served as the organization’s legal counsel for nearly 20 years.

Salem and Alperstein were elected to the roles by USA Fencing voting members – more than 5,000 individuals who held current USA Fencing memberships of supporting level or higher and were 18 years or older as of Feb. 1, 2021.

In total, 1,332 individuals cast ballots in the At-Large race that included eight candidates. Votes were cast utilizing a preferential voting system, which awards points to each candidate based on how they are ranked by each voter.  A rank of No. 1 awards the candidate 8 points, rank No. 2 awards 7 points, and so on with rank No. 8 awarding 1 point.  The grand total of points earned from all ballots was used to determine the winners.