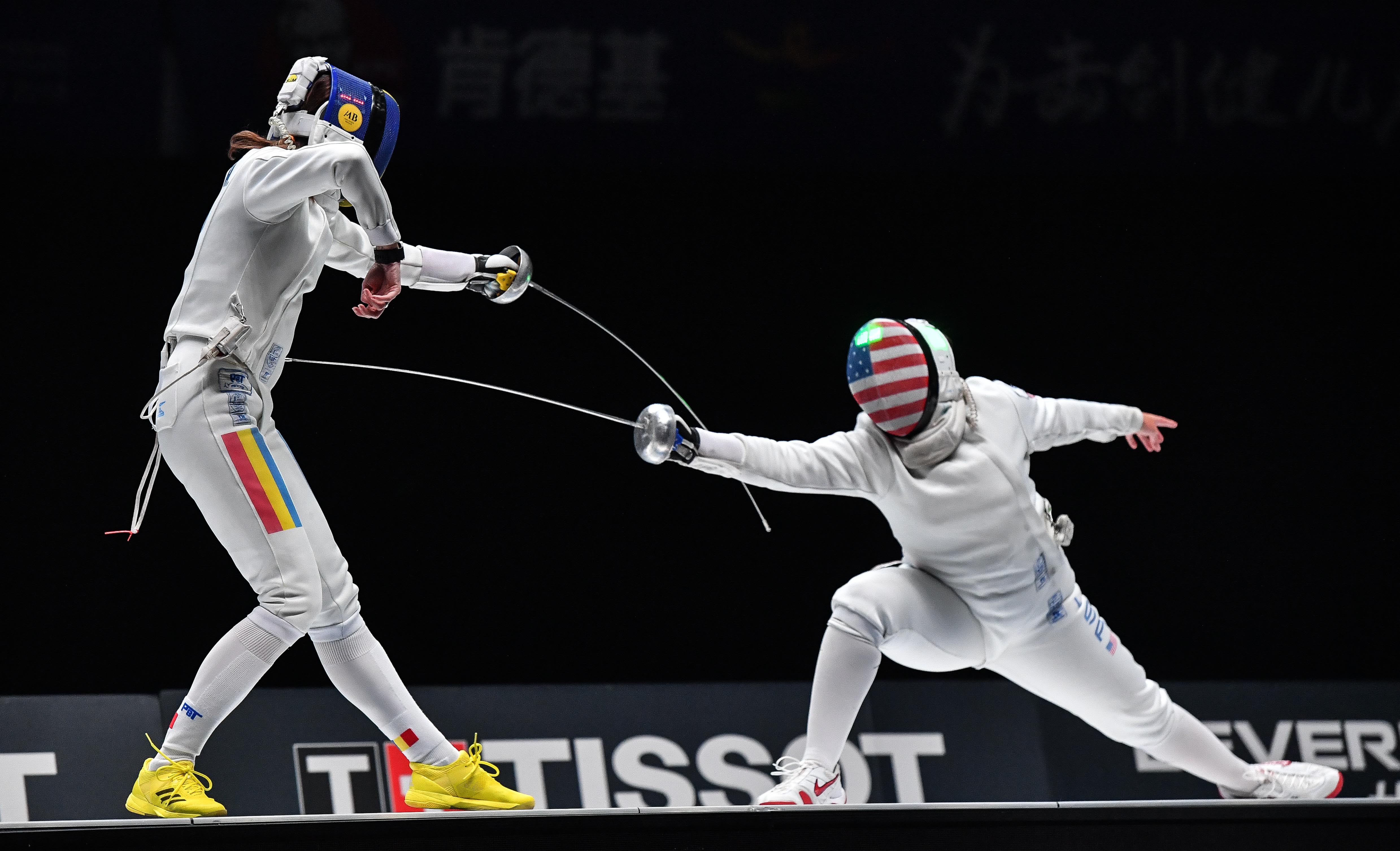 (Colorado Springs, Colo.) – During the 2020 Olympic Games in Tokyo, Team USA has the potential to being home more medals than ever before.

Now one of the world’s powerhouses in fencing, eight of the United States’ 24 fencers have won an Olympic medal and seven currently rank in the top 10 in the World Rankings.

With all six team events being contested for the first time at the Games, Team USA will send a full contingent of 18 individual fencers and four team replacement athletes with the team split evenly between returning Olympians and first-time team members who have the potential to make a splash on the world’s biggest stage.

In 2018, Courtney Hurley, Kelley Hurley and Homes competed together and brought home the first World Championship gold for team USA in women’s epee. With the core of that team still intact, along with replacement athlete Anna van Brummen (Houston, Texas / Alliance Fencing Academy / Princeton), Team USA will look to repeat on that gold medal-winning performance. The squad currently ranks No. 5, but prior to the pandemic, secured bronze at two of the three World Cups during the 2019-20 season.

Ranked No. 2 in the world, Eli Dershwitz (Sherborn, Mass. / Zeta Fencing Academy / Harvard) is a top medal contender in men’s saber. The 2018 World silver medalist, Dershwitz became the first U.S. men’s saber fencer to win the Overall World Cup title as the No. 1 fencer in the world in 2018. Prior to the pandemic, Dershwitz won silver at the Warsaw World Cup. Looking to return to the Olympic podium, Daryl Homer (Bronx, N.Y. / Peter Westbrook Foundation / St. John’s) earned silver in Rio, becoming the first U.S. men’s saber fencer to win an individual silver medal at the Olympic Games since 1904. Homer also made history in 2015 when he became the first U.S. man to win a medal in saber at the Senior World Championships. Competing at his first Olympic Games, Andrew Mackiewicz (Westwood, Mass. / Zeta Fencing Academy / Penn State) is a three-time Senior World Team member, two-time NCAA Champion and the 2018 Pan American Championships bronze medalist.

Available to Team USA as the replacement athlete is 2019 Senior World Team member Khalil Thompson (Teaneck, N.J. / Peter Westbrook Foundation / Penn State), who won his first Division I gold at the May North American Cup to solidify his spot on Team USA. The United States will enter the team event ranked No. 8 in the world.

Lee Kiefer (Lexington, Ky. / Bluegrass Fencers’ Club / Notre Dame) has been knocking on the door at the Olympic Games, taking fifth at her first Olympics in London. Currently No. 5, Kiefer ranked No. 1 during the current quad and prior to the pandemic, won three medals on the World Cup circuit. The 2011 Senior World bronze medalist looks to win the first individual women’s foil medal at her third Olympic Games in Tokyo. Kiefer’s teammate in London, Nicole Ross (New York City, N.Y. / New York Athletic Club / Columbia), won three medals on the World Cup circuit to start the quad and will compete at her second Games. The 2019 Pan Am Champion took a top-16 finish in the last tournament before the pandemic. The third member of Team USA competing individually will be Jackie Dubrovich (Riverdale, N.J. / Fencer’s Underground / Columbia), who made her first Senior World Team in 2019 and will fence at her first Olympic Games.

As a team, Team USA has medaled at the last two World Championships. Three years ago, the U.S. women’s foil team won its first ever World Championship in the team event. Two of those gold medalists – Kiefer and Ross – return looking to repeat the accomplishment. The following year, Kiefer, Ross and Dubrovich earned bronze. Sabrina Massialas (San Francisco, Calif. / Massialas Foundation / Notre Dame), the younger sister of Alex Massialas and the first U.S. fencer ever to win a Youth Olympic Games gold medal in 2014, will be the replacement athlete in Tokyo and together, the U.S. women’s foil team looks to win the squad’s second Olympic medal after winning silver in 2008.

The entirety of the men’s epee squad will be fencing at its first Olympic Games, but two of its members have medaled internationally. Although Jake Hoyle (Philadelphia, Pa. / New York Athletic Club / Columbia) didn’t compete internationally until after he graduated from Columbia, where he won two individual NCAA titles, Hoyle won two bronze medals on the World Cup circuit in 2019, becoming the first U.S. men’s epee fencer to earn two individual medals in the same season in a decade. Curtis McDowald (Jamaica, N.Y. / Peter Westbrook Foundation / St. John’s), the 2018 Pan American bronze medalist, also has stood on the podium on the World Cup circuit, taking the bronze at the 2019 Buenos Aires World Cup. Yeisser Ramirez (Brooklyn, N.Y. / Peter Westbrook Foundation) is originally from Cuba, but the 2015 Senior World Team member will represent Team USA at his first Olympic Games.

For the first time since 2004, the United States will compete in the men’s epee team event. Currently ranked No. 10, Alen Hadzic (West Orange, N.J. / Fencers Club) qualified as the replacement athlete after winning gold at the May NAC.

Featuring a trio of athletes with more than 30 years of combined international experience, two of the women’s saber fencers rank in the top 10 for Team USA. 2018 World bronze medalist Eliza Stone (Chicago, Ill. / Bergen Fencing Club / Princeton) will compete at her first Olympic Games in Tokyo after narrowly missing out in 2016. No. 6 in the World Rankings, Stone took a top-eight finish at the Montreal Grand Prix during the 2019-20 season prior to the pandemic. Team USA’s most decorated fencer in history, Mariel Zagunis (Beaverton, Ore. / Oregon Fencing Alliance / Notre Dame), will be in attendance, competing at her fifth Olympic Games and first as a mom. The two-time Olympic Champion and four-time Olympic medalist, including bronze in the team event in Rio, currently sits at No. 9. One of eight women in the U.S. delegation with four or more World Cup circuit medals to her credit, Zagunis won gold in the final event before the pandemic in Athens. Zagunis’ teammate on the bronze medal team in Rio, Dagmara Wozniak (Avenel, N.J. / Manhattan Fencing Center / St. John’s), will be competing at her third Olympic Games. The five-time Senior World team medalist took a top-eight finish in Athens prior to the shutdown.

Making her Senior National Team debut, two-time NCAA Champion Francesca Russo (Wayne, N.J. / Bergen Fencing Club / Notre Dame) will be the replacement athlete for the women’s saber team. Together, the squad looks to defend its bronze medal from Tokyo. The team currently ranks No. 7, but prior to the pandemic, won bronze at the Salt Lake City World Cup in 2019.

All three members of Team USA competing individually rank in the top 10. Gerek Meinhardt (San Francisco, Calif. / Massialas Foundation / Notre Dame) ranks the highest of the men’s foil fencers at No. 2. Competing at his fourth Olympic Games, the two-time Senior World bronze medalist and 2016 Olympic team bronze medalist is looking stronger than ever before. After winning two medals on the circuit prior to the pandemic, including the gold at the Torino Grand Prix, Meinhardt took momentum into Tokyo by winning gold at the Doha Grand Prix in March in the only international competition this season before the Games begin. Meinhardt’s teammate on the 2016 bronze-medal winning team and fellow San Francisco native, Alexander Massialas (San Francisco, Calif. / Massialas Foundation / Stanford), won individual silver at the Rio Olympic Games, becoming the first U.S. foil fencer to win an individual silver medal at the Olympic Games since 1932. Now No. 5 and fencing at his third Games, Massialas won silver and bronze prior to the pandemic. Although Nick Itkin (Los Angeles, Calif. / Los Angeles International Fencing Center / Notre Dame) will be competing at his first Olympic Games, at No. 9 in the world, the junior at Notre Dame has had a meteoric rise in the last three years. Itkin won gold at the 2018 Junior World Championships before winning his first medal on the senior circuit in the fall. Now Itkin has three World Cup medals to his name, including gold at the Paris World Cup in 2019.

Three of the four members from the 2016 bronze medal-winning team return in Tokyo, including Race Imboden (Brooklyn, N.Y.), who ranks No. 4 and enters as the replacement athlete. The reigning Senior World Champions, Team USA won its first team gold in men’s foil in 2019 and looks to become the first U.S. team to win gold at the Olympic Games. Since Rio, the men’s foil team has medaled at every Worlds during the quad and currently ranks No. 1 in the world, winning three of the four World Cups in the 2019-20 season prior to the pandemic.