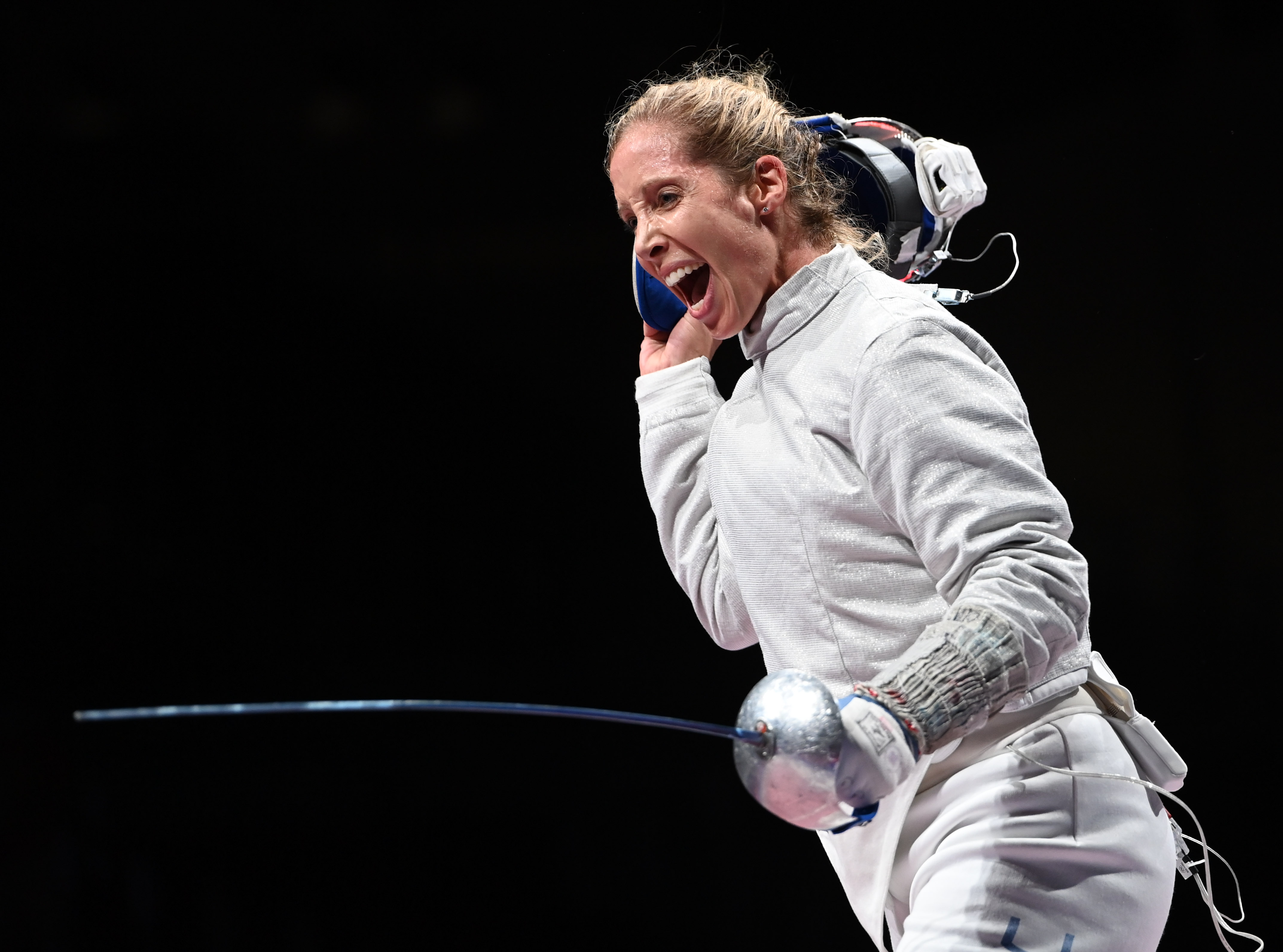 While the result left the two-time Olympic Champion without a fifth career medal at the Games, Zagunis said she was pleased with her fencing during three bouts that saw her defeat 2012 Olympic Champion Jiyeon Kim (KOR), 15-12, in her second bout before a loss to four-time Olympic medalist Sofya Velikaya (ROC), 15-8, in the quarter-finals.

“I’m actually really proud of the way I fenced. It’s very rare for me to come away from a tournament I haven’t won and actually be happy with my performance, and that’s unfortunately what happened today. Fortunately and unfortunately,” Zagunis said. “I just felt like I fenced really well and just knowing what I’ve been through, what my body’s been through, what we’ve all been through with COVID – everything cumulating the last five years has been a really long and arduous, challenging journey.”

Zagunis began the event strong, cruising through a 15-3 table of 32 bout against Gabriella Page (CAN).

In the 16, she took on Kim – the fencer who gave Zagunis her first-ever loss in Olympic competition in the semifinals of the 2012 Games.

The two have fenced five times since 2012 with Zagunis holding a 3-2 advantage. Zagunis never let Kim catch a break, ending the first period at 8-7 and finishing the bout at 15-12.

In the quarter-finals, Zagunis took on Velikaya – the World No. 2 and an eight-time Senior World Champion.

Zagunis kept the first period tight with Velikaya leading by one at 8-7. In the second, however, the Russian ran away with the bout for a 15-8 win.

“Saber goes really quickly, so just a few touches here and there can really swing the momentum and I just needed to get a better hold on it in the second half, but I kind of let it get away from me,” Zagunis said.

For Zagunis, each Games has told a different story.

In 2004, she was called up at the last minute as a replacement after a fencer withdrew prior to the Games.  She would go on to become the first U.S. Olympic Champion in fencing in 100 years.

In 2012, she was elected flagbearer for the U.S. delegation, leading Team USA in Opening Ceremony before finishing fourth in a Games with no team event.

Tokyo marks a new first for Zagunis – her first Games as a mother to her 3-year-old daughter Sunday. And the team event on Saturday leaves one more opportunity to stand on the podium on the table.

“I think the most important thing for me is to walk away from this individual competition with my head held high, knowing that I’m really proud to be here and show that it can be done,” Zagunis said. “You don’t have to just choose motherhood or being a professional athlete or motherhood or a career. Just setting the example to be proud of yourself for what you can accomplish, even if it doesn’t mean getting everything.”

While team remains her next priority, with only three years left before the Paris Games, Zagunis also said she wouldn’t rule out a sixth team.

“This whole time, I was just trying to keep my thoughts focused on Tokyo … but I’m not ruling out Paris, especially knowing that again, what I’ve been through the past five years. To feel the way I did out there today really gives me good confidence going forward,” she said. “I didn’t want it to be over. It was over too soon because I feel like I have more in the tank.”

While Zagunis is now 36 years old and would be 39 in Paris, the return wouldn’t be unprecedented as fencing legend Valentina Vezzali (ITA) was 38 when she won team gold and individual bronze in London.

“I’ve just put in so much work that I feel in a really good spot physically. And in our sport, especially when you get up there in age as well, that’s one of the most important things to balance is your physical preparation … and I want to thank my team back home for that,” Zagunis said.

Wozniak, who won team bronze with Zagunis in Rio, held a 14-12 lead over 2019 Senior World Team Champion Olga Nikitina (ROC) in the second period when Nikitina scored three straight to win the bout, 15-14.

A 2018 Senior World individual bronze medalist, Stone fenced Anna Bashta (AZE) in the table of 32 and found herself unable to catch up after the first period. Bashta controlled the second as well, finishing the bout at 15-9.

"It didn't end up the way I wanted it to, obviously. I feel like I didn't really show all of my best fencing today, but it was definitely exciting because it was my first time,” Itkin said.

Itkin held off a late comeback by Anton Borodachev (ROC) in the table of 32 to win his opener, 15-11.

In the next round, however, he struggled with his opponent’s twin brother, 2019 Junior World Champion Kirill Borodachev (ROC) who defeated Itkin at the Doha Grand Prix in March. Down 13-10 in the second period, Itkin took three straight to tie the bout, but the Russian ended with two touches and a 15-13 win.

"There were certain moments where I wish I would have done something differently, but I mean it was a very tactical bout and there were a lot of different strategies I tried to use,” Itkin said. “I think in the middle of the bout I could have fenced a little bit better and I feel like I didn't work for the last two touches. I didn't execute what I wanted to do."

Meinhardt fell behind early against Vladislav Mylnikov (ROC) who ended the first period with an 11-8 lead and closed out at 15-11 in the second period.

“Obviously it didn’t go great for me. That’s partly my opponent fenced great and some days in fencing, you just can’t feel your tip and for my weapon where you have to hit with the tip, it’s unfortunate,” Meinhardt said after the loss. “But I’ll be more motivated with Alexander and Nikita … we’re just looking ahead to team now and getting really pumped for that to come out strong.”

“That actually inspired me a ton. I felt really loose out there. I was really inspired by the way that Lee fenced and was able to get over her nerves and compete at that amazing level yesterday to win gold,” Meinhardt said.

Massialas, who also won individual silver in Rio, drew five-time Senior World Champion Peter Joppich (GER) in the table of 32. The two exchanged touches for most of the first period with Massialas tying the score at 12. Joppich answered with three straight to end the bout at 15-12.

“I got caught up on my legs … He took advantage of the fact I wasn’t moving the way I should have,” Unfortunately today he got the best of me. I’m disappointed in my fencing, disappointed in the fact that I wasn’t able to execute what I knew I could’ve and I should’ve done, so that’s on me.”