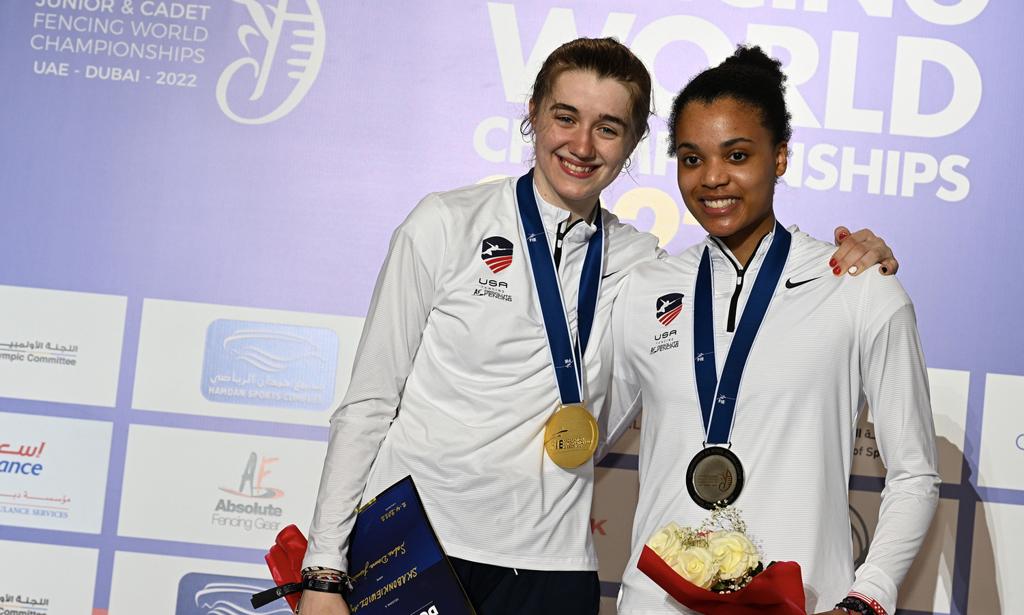 “It takes a bit to process,” Skarbonkiewicz said. “It was a lot of ups and downs. Sometimes I’d be fencing perfectly, and other times I’d be like, ‘Oh, what am I doing?’ I was able to overcome that.”

The tournament started in spectacular fashion when, on the first evening of competition, two USA fencers made the finals in junior women’s saber: Skarbonkiewicz faced Honor Johnson (Bergen Fencing Club), guaranteeing gold and silver for USA to kick off nine days and 18 events in Dubai. The first three days of the championships included all of the saber events, beginning with individual juniors on the first day, cadets on the second and junior team on the third.

Skarbonkiewicz took the gold in the final match, 15-9, but her status as world champion would soon be repeated. The next morning, she was back on the strip on her way to a second gold medal in as many days. In cadet women’s saber, Skarbonkiewicz breezed her way to the finals for another all-USA gold medal match. This time she faced teammate Siobhan Sullivan (Oregon Fencing Alliance), winning 15-9. The teammates secured gold and silver for the USA.

In cadet men’s saber, two Team USA fencers were on the podium again as Cody Walter Ji (Nellya Fencers) and William Morrill (Fencers Club) won their way into the semifinals. Eventual gold medalist Zuhriddin Kodirov of Uzbekistan won against Ji to make the finals, 15-10, while German Colin Heathcock beat Morrill, 15-7. Kudos also go to a great performance by Connor Liang (Laguna Fencing Center), who lost to Ji in the quarterfinals, 15-11, and finished in fifth place overall.

In team competition, the USA women took fifth place out of a field of 27 international teams. The women outscored Germany 46-26 in the round of 16 before losing to Hungary in the quarterfinals, 45-40. The Team USA men's team finished 17th.

To meet the foil and epee teams, read our Junior & Cadet Worlds preview