From April 21-24, more than 1,800 fencers from across the country, including 17 Olympians and Paralympians, will gather at the Charlotte Convention Center for the Division I/Parafencing National Championships and April North American Cup. 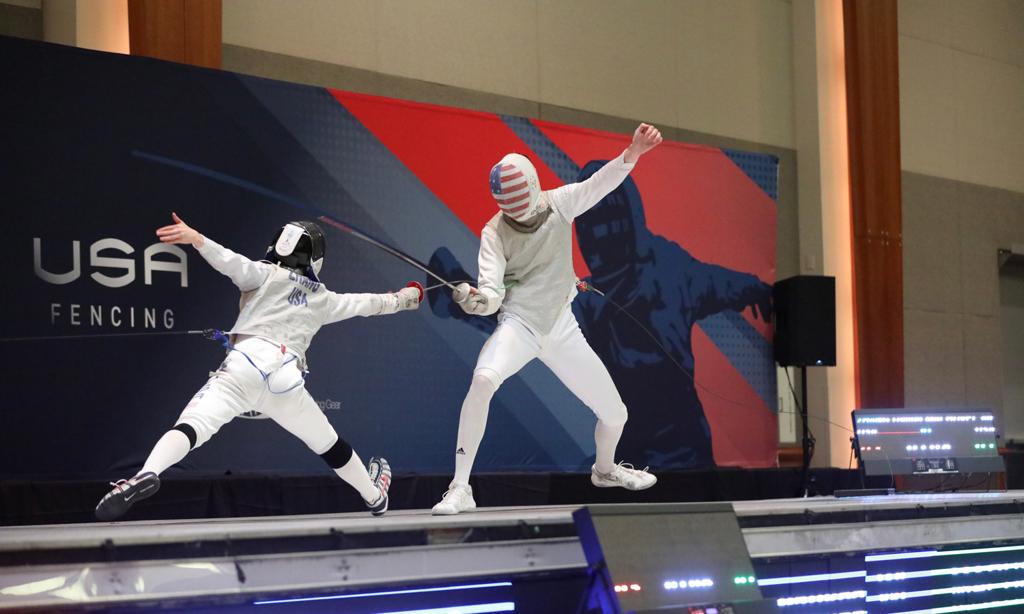 Fencers from 33 different states and the District of Columbia will gather in Charlotte. Photo by Gabrielle Kokes

(COLORADO SPRINGS, Colo.) — They’re heading to Charlotte with goals, dreams and a competitive spirit forged over months of practice in their home clubs and competitions around the world. These fencers from across the nation — some 1,843 in all — will gather April 21–24 at the Charlotte Convention Center for the Division I/Parafencing National Championships and April North American Cup.

For these fencers, the event is a chance to test themselves on the national stage against athletes from 33 different states and the District of Columbia.

The four-day event will crown champions in the top fencing classification, known as Division I, where five of the six reigning national champions are back to defend their titles. National championships are also on the line in Parafencing and the Division I team event. In other classifications — including Division II, Junior and Cadet — athletes will compete for medals and to improve their national ranking.

The stakes are high for fencers in Division I. Each season, these fencers compete for points at national and international tournaments based on their performance at those events. The fencers with the most points in their weapon (epee, foil or saber) qualify to represent Team USA at international tournaments. This event in Charlotte is the final domestic event at which these senior-level athletes can earn points toward qualification for this summer’s World Fencing Championships in Cairo, Egypt.

The tournament field is packed with 17 Olympians and Paralympians as well as a number of world champions, national champions and NCAA champions.

Those expected to compete include:

Who’s Who: Olympians and Paralympians in Charlotte

Seventeen Olympians and Paralympians are scheduled to compete in Charlotte:

The event begins with a full day of action on Thursday, April 21, followed by three more days of morning-to-night fencing. Each day will feature competition in all three weapons — foil, epee and saber.

Admission to the event is free, and tickets are not required. To protect the health and safety of our athletes, coaches and officials, proof of vaccination is required for all visitors age 12 or older. Spectators should present their vaccination card and photo ID upon entry. Guests between the ages of 3 and 11 must provide proof of vaccination or proof of a negative COVID-19 PCR test result dated within 72 hours of arrival to the venue.

Everyone in attendance ages 3 and older, including coaches, athletes, spectators and staff must wear a mask that covers their mouth and nose at all times, including fencers during live competition. According to the USA Fencing mask mandate, masks must be two-layer cloth masks or surgical face coverings. Single-layer gaiters, bandannas, masks with vents, and inserts that clip into the fencing mask and do not fully contact the athlete's face are not permitted.