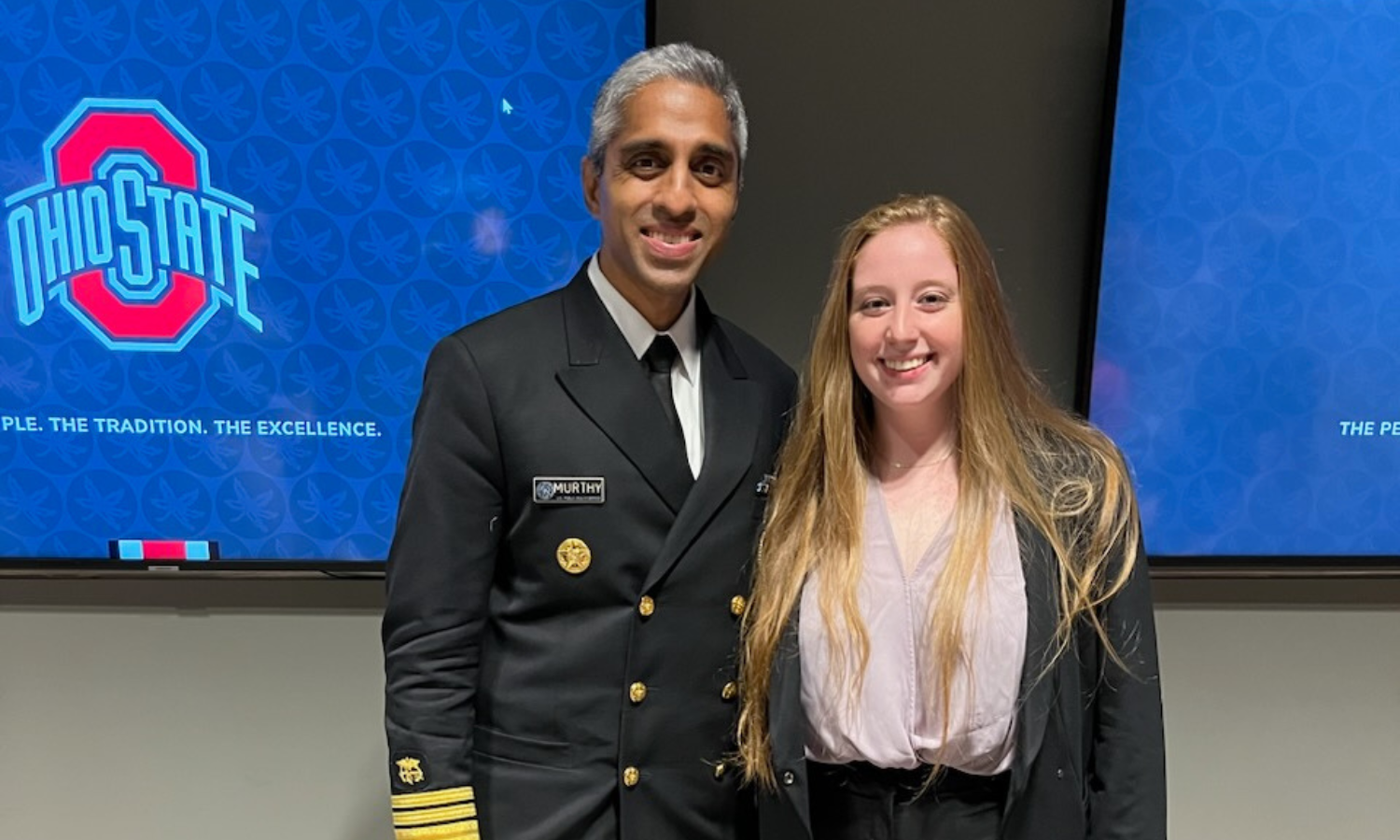 COLORADO SPRINGS, Colo. — It’s not often that a young person gets a seat at the table with one of the most powerful medical professionals in the land.

Last month, Miranda Freedman (Renaissance Fencing Club/The Ohio State University) had that chance and was certain to make the most of it.

In October, the foil fencer was among 10 Ohio State student-athletes selected to meet with Dr. Vivek Murthy, the U.S. Surgeon General, to talk about mental health.

The Surgeon General, informally known as the “nation’s doctor,” is nominated by the president and confirmed by the Senate to help Americans improve their health and reduce the risk of illness and injury. And because Dr. Murthy includes youth mental health on his list of the nation’s top five public health priorities, this meeting had additional importance.

When Freedman, a sophomore at Ohio State studying to become a sports psychologist, learned that Dr. Murthy was visiting campus to meet with a select group of student-athletes, she immediately reached out to express her interest.

“A few days later, I received an email asking if I was available on the particular time and date Vice Admiral Murthy was coming to campus, and I immediately let them know that I was free,” she says. “When it was confirmed that I would be able to attend, I immediately called my dad super excited. However, then I became rather nervous because I realized the gravity of the opportunity to meet with someone of such status to work on creating real change on an issue that I am extremely passionate about.”

‘She Saved My Life and My Fencing Career’

That passion comes in large part from Freedman’s own experiences with mental health struggles. During a difficult freshman year, Freedman reached out to the sports psychologists at Ohio State — a service offered as a perk to student-athletes.

“We began weekly sessions to work on my mental health, sports performance and even learn about mental health as a career,” she says. “After experiencing the incredible progress I made working with her, I had a conversation about switching my major to pursue a career in sports psych and be able to help others the way my psychologist helped me. She saved my life and my fencing career, so I plan on being that resource for the next generation of student-athletes.”

Freedman knew she wasn’t alone in facing this issue. She has spent many hours thinking about people like Harry Miller, a former Ohio State football player who retired early because of mental health concerns, and Katie Meyer, the Stanford soccer goalie who died by suicide earlier this year.

“I am passionate about this because my peers — other student-athletes — and I need help, and I feel ready to step up to the plate and figure out a way to make that happen,” she says. “It is crucial to have resources that provide mental health support, because in order to compete at an elite level, we must have the emotional, mental and physical capacity to do so.” 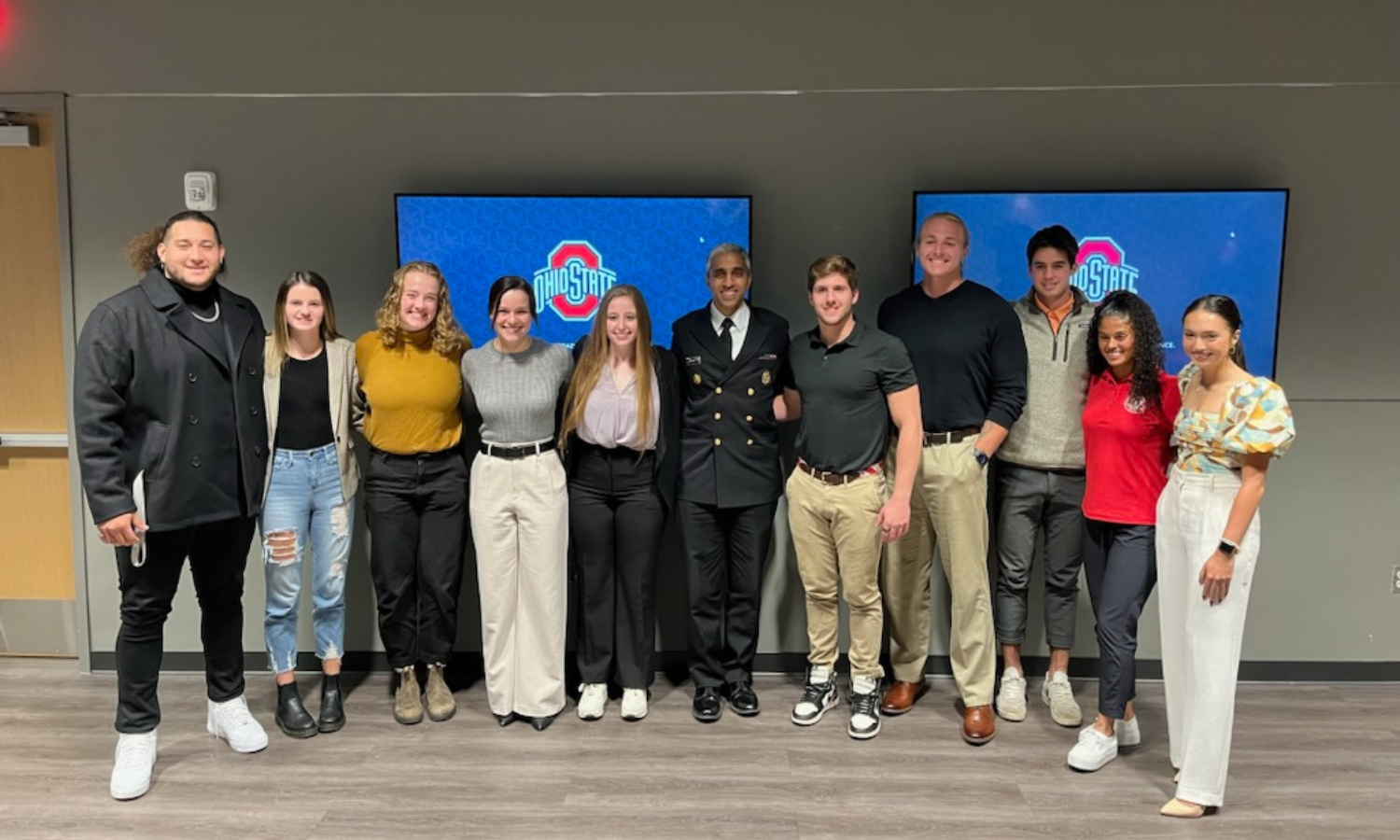 Freedman (fifth from left) was among 10 Ohio State student-athletes selected to meet with the Surgeon General.

During her conversation with Dr. Murthy, Freedman was able to convey what she feels is the most pressing issue surrounding student-athlete mental health: accessibility.

“I feel extremely lucky because there are four or five members of the Sports Psychology and Wellness Services team here at Ohio State that are just for student athletes, and we can access them at no expense to us,” she says. “However, there are a lot of places that do not have the same privilege. To me, that is a huge issue.”

She shared the example of some friends who attend a school in Kentucky that has about 350 student-athletes and just one mental health provider. As a result, it can take about three months just to get an appointment.

“This is completely unacceptable in my opinion, because we face an immense amount of pressure as student-athletes, and the one thing we all need is a safe place to just let it all out,” Freedman says.

She says Dr. Murthy seemed moved by what he heard and plans to go back to Washington to find a solution.

“The Vice Admiral encouraged us that, for the time being, it’s necessary to have open conversations and ensure that guidance and coaching is responsive to our needs,” she says. “When it feels like there is no room to breathe, find that open space and breathe.”

‘Find the Person Who You Can Talk To’

While mental health professionals are uniquely trained to help others who are struggling, they aren’t the only people willing to hear you out when you need help.

“I encourage everyone to find the one person you know you can count on,” Freedman says. “Find the person who you can talk to, and do not be afraid to say that you need help and support. Starting a conversation is the first step in getting healthier, so it is necessary to have strategies for when/if that is something you need.

“My Instagram DMs are always open to anyone who needs to talk or rant because I’ve been where I’ve felt alone and just needed someone to talk to,” Freedman says. “Remember that you are no less of a person, athlete, teammate, child, parent, friend, student or fencer because you are struggling. You are not alone, and you should be proud of yourself for all the progress you made.”

In addition to the solutions Freedman shares above, we at USA Fencing encourage members to use our Member Wellness Program to get connected with free, confidential counseling services.