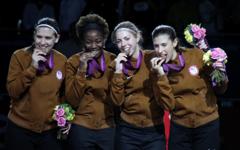 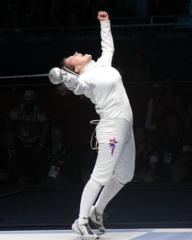 Courtney Hurley celebrates her overtime win against Russia in the bronze medal match.

(London) – Since the inclusion of women’s epee for the first time in the 1996 Olympic Games, Team USA has been on a quest for an Olympic medal.

After the Beijing Games, the Americans were ranked 16th in the world in women’s team epee, but the U.S. Team began climbing the ranks as they contended with many of the top teams in the world for placings at World Cups.

In March, Team USA won a silver medal at the St. Maur World Cup – a first for the program and a result that would set the stage for an Olympic podium finish in London.

On Saturday, the U.S. Women’s Epee Team reached its goal with a bronze medal win over Russia in overtime – 31-30.

“We’ve been together for a long time and that was huge for us,” said Coach Roberto Sobalvarro (St. Paul, Minn.) “You know, the last two years we’ve quietly been doing better than almost everybody else and we have done everything I’ve always said we could do and now we really have done everything I knew we could do. It’s always been all about the team.”

After climbing to a #5 world ranking coming into the Games, Team USA matched up with Italy in the quarter-finals.

With Courtney Hurley (San Antonio, Texas), Susie Scanlan (St. Paul, Minn.) and Maya Lawrence (Teaneck, N.J.) in the starting lineup, Team USA built a 22-20 lead after five bouts and a 4-0 shutout of Rossella Fiamingo by Lawrence, but Scanlan pointed to the sixth bout when asked what the turning point was.

“Oh, Courtney beating Del Carretto, definitely. What was she like +5 or something? It was perfect and she didn’t rush for it. It was very controlled. From there we all kept the momentum up,” Scanlan said of her teammate’s 8-3 bout win over Bianca Del Carretto which brought the score to 30-23.

Scanlan posted a critical result of her own when she defeated Nathalie Moellhausen, 5-3 to give Hurley a 40-33 lead going into the final bout.

Hurley posted one final win for Team USA in her anchor leg when she defeated Fiamingo, 5-2 – giving Team USA a 45-35 win over Italy.

In the semifinals, the same three U.S. team members struggled with Korea and, although Hurley posted an 8-5 win over Injeong Choi in the fifth bout, Team USA still lost the match, 45-36.

“I thought we would beat Italy, but I was surprised it wasn’t more close. And the lineup I wanted was to go from Italy to Korea, but Korea has been so solid… we’ve beaten them before, but at this Games they’ve been amazing and today they were the better team,” Coach Sobalvarro said. “I think we could have handled it differently. I think we got careful which is not us, obviously and they pulled us out of our game.”

Sobalvarro laughed later as he said: “It would have been nice to have been in the final, but I’ll take this one. I’m not giving it back.”

In the bronze medal match, Team USA faced Russia – the second-ranked team in the world who lost a one-touch overtime match to China in the other semifinal.

Although the loss still stung, the Americans had nearly four hours to regroup.

“We had a couple hours so I think it was really good. We went away. We saw our families. We took showers. We came back and it was like a new competition,” Lawrence said.

In between matches, the team decided to substitute in replacement athlete and 2008 Olympian Kelley Hurley (San Antonio, Texas) for Scanlan. The move allowed Hurley, who did not compete in the individual event, to achieve Olympian status for a second Games, but, more importantly, it gave Team USA an advantage.

After Lawrence and Courtney Hurley split their opening bouts with Anna Sivkova and Violetta Kolovova for an 8-8 score after the second bout, Lyubov Shutova defeated Kelley Hurley, 4-1, in the next bout.

Kelley Hurley rebounded in the fifth bout where she defeated Sivkova, 4-1, to keep Team USA within a touch of Russia’s 16-15 lead.

Courtney Hurley outscored Shutova, 4-2, to give bring the score to 20-17, in the sixth bout.

“We were all on and I think that they were nervous and hesitant. More hesitant than at normal World Cups when they just attack us and aren’t afraid. They were more hesitant and we used that to our advantage,” Courtney Hurley said.

And, although Kelley Hurley was outscored by Tatiana Logunova, 5-4, in the seventh, Lawrence made up the difference with a 4-2 victory of Shutova to give Courtney Hurley a 27-25 spread going into the final match.

Sivkova mounted a comeback over the course of the three minute match to tie the score at 30 and force an overtime period.

With near silence in the ExCel Center, Courtney took the strip for the sudden death period in which the first team to score wins.

Courtney Hurley came off the line with a quick attack and scored the touch that would earn Team USA a medal.

“Every time she attacked, she hit me – every time she controlled it. And every time I attacked her, I got her, so I knew I had to attack and decided to do it right away instead of waiting. So I just did it right off the en garde line,” she said.

Although the win was the first medal for Team USA in a women’s epee event at the Senior World or Olympic level, Courtney Hurley said the win was within their expectations.

“I knew it might have been a stretch, but I knew it was possible. We did so well in the season that our ranking let us have Italy first and we knew we could beat Italy. We’ve beaten them many times,” she said.

Kelley Hurley, on the other hand, said she hadn’t expected to return home with a medal.

“We hadn’t beaten Russian in a long time and the only goal for today was to not get creamed by Russia and then we ended up winning!” she said. “I did not think a medal was going to happen. I was so happy to qualify with my sister and people were like ‘what if you get a medal?’ and I was like ‘I’d be so happy, I’d just quit.’ And here it just happened. I didn’t even see her last touch because I had my eyes closed and I felt like I was going to throw up.”

Kelley Hurley also reflected on what it was like to come into the team event in a medal match.

“I think my mind went blank. The only thing I was thinking is that I can’t let the team down. I’m here for the team and this was all there was and I put 180% of my energy into that last bout. I was not saving anything so I was drained after it – emotionally and physically,” Kelley Hurley said.

Lawrence agreed that Team USA’s underdog status to start the day made the victory even sweeter.

”It’s so amazing.  No one even expected us to make it to the top four and to get the bronze is so amazing. I can’t even describe it. All the hard work we’ve done and finally coming together as a team? It’s amazing,” Lawrence said.

The competition schedule on Sunday is as follows: