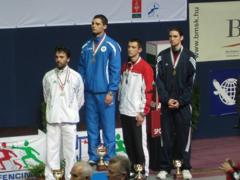 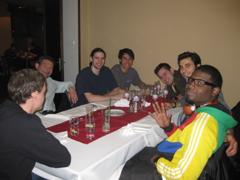 Congratulations to Ben Igoe  on his 3rd place finish at the Budapest Men's Saber Grand Prix!

Traditionally, this is one of the hardest world cups of the season, but Ben made it look easy slicing his way through some of the top fencers in the world including #1 ranked Luigi Tarrantino of Italy and 2004 Olympic Silver Medalist Zsolt Nemscik of Hungary in achieving the highest result of his career.

Using an extremely effective counter-attack along with a lunge that surprissed many opponents with it's length he made it look easy for most of the day until running into Dumetrescu of Romania.

To top it off, he fenced great in the team event the next day helping the USA to finish in 6th place.   The team event included victories over Spain and Russia (Only the 3rd time we have beaten them in history)

News and Notes
* Dating back to the Thailand world cup in May 2008, at least one USA fencer has reached the top-8 in 7 straight international events and 9 of the past 11.
* Also competing for the USA were Luther Clement, Konate Primus and Mike Etropolski
* Saber World Champion Felix Reichling of Germany was coaching the Canadian team
* Newly retired 2000 Olympic Champion Mihai Covaliu was there as a coach for Romania
* Dmitry Guy traveled with the USA team as a coach
* In the team event: Hungary fenced without Nemscik using Junior Iliasz  and France fenced without Lopez using Apithy.
* Just announced: Algeria is postponed (it was scheduled during their elections) and the Thailand World Cup is cancelled