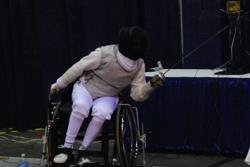 (Colorado Springs, Colo.) – Although Catherine Bouwkamp (Fishers, Ind.) is just a senior in high school, the London Paralympian is one of the most formidable forces in American fencing.

The 17-year-old hasn’t lost a bout in wheelchair women’s fencing on American soil since 2010 and continued her run on Saturday when she won her 19th straight national tournament title at the October North American Cup in Milwaukee.

Following her gold medal win in the epee competition on Friday, Bouwkamp won the women’s foil title on Saturday with a 15-0 shutout of Patricia Dykes (San Antonio, Texas).

Representing Kuwait, former Wheelchair World Champion Tareq Alqallaf won his second title of the weekend and fifth of the season with his victory in the men’s foil event.

In a bid to qualify for her first Cadet World Team, Sarah Merza (Wayne, N.J.) moved up to the #1 U.S. ranking after winning gold in the cadet women’s saber event.

Merza won four direct elimination bouts to advance to the semifinals where she defeated Tori Johnson (Peachtree City, Ga.), 15-5, and went on to take her first cadet NAC title after a 15-8 win over Regina O’Brien (Wellesley Hills, Mass.)

Seeded first out of the pools, Yefremenko won three direct elimination bouts to advance to the quarter-finals where she outtouched Tzarina Von Fritsch (San Antonio, Texas), 8-7.

While Marino came out of the pools as the first seed, Machovec was seeded 71st in the table of 128.

Both fencers advanced to the semifinals where they met a pair of fencers from Salle Mauro.

Marino’s closest bout of the day ultimately came from his teammate in the gold medal final, but Marino came away with the victory and won his bout against Machovec, 15-13.

In the Division II men’s epee event, Zachary Cheng (Bloomington, Ill.) narrowly escaped his foes in the tables of 32 and 16 where he won bouts against Jeffrey Ozanne (Glenwood, Minn.) and Griffin Winterman (Penfield, N.Y.) by scores of 15-14 and 8-7, respectively.

Cheng secured his first ever NAC medal with a 15-3 win over Julian Maldonado (San Antonio, Texas) in the quarters and defeated Austin Crawford (Southlake, Texas), 15-11, in the semis.

Cheng finished his day with a 15-12 victory in the gold medal final against Cameron Sullivan (San Francisco, Calif.)

Zuzu Tang (Bellevue, Wash.) stood on the podium for the first time in 2011 when she won silver in the Division III women’s foil event at the October NAC as a 12-year-old.

On Saturday, Tang returned to the podium to capture her first gold medal win at a NAC – this time as a Division II fencer.

Seeded first out of the pools, Tang dominated nearly all of her direct elimination opponents and gave up no more than seven touches to anyone in her first five bouts.

Tang went on to win both her semifinal and final bouts by 15-8 margins over Zoe Loh (CAN) and Shani Edwards (Lexington, Ky.), respectively.

Top eight and results are as follows: