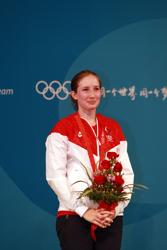 (Colorado Springs, Colo.) – Two of USA Fencing’s most decorated athletes and three coaches will be inducted into the USA Fencing Hall of Fame in 2015.

The five inductees were selected via an online vote that closed on Sunday and was open to all individuals ages 18 and older who held current USA Fencing memberships of supporting level or higher on Feb. 1, 2014.

Six years after retiring from international competition, two-time Olympic medalist Becca Ward (Washington, D.C.) will enter the Hall of Fame as one of the most decorated saber fencers in USA Fencing history. Ward made history as the first fencer ever to hold Senior, Junior and Cadet World titles all in the same year as a 16-year-old in 2006. Ward became the youngest fencer ever to represent the United States at the Olympic Games in 2008 and won bronze in both the individual and team events in Beijing. After the 2008 Games, Ward began fencing for Duke University and became the first women's saber fencer ever to win three NCAA titles.

Robert Cottingham (Orange, N.J.) won six U.S. National Championship titles in saber between 1986 and 1992. A silver medalist in the team event at the 1987 Pan American Games, Cottingham also had an outstanding collegiate career where his record was 108-11 while fencing for Columbia and won both individual and team NCAA titles in 1988.

Three coaches also will be inducted into the USA Fencing Hall of Fame.

Marty Schneider (Ossining, N.Y.) has coached at the Riverdale Country School in the Bronx for nearly 60 years. Schneider’s students have gone on to win NCAA titles, compete on Olympic and World Championship Teams and be named to All-Ivy and All-American Teams. Among his most successful students are 2008 Olympic silver medalist Tim Morehouse (New York City, N.Y.) and Tim Hagamen (New York City, N.Y.) who won medals at both the Junior and Cadet World Championships.

The complete election results are as follows: