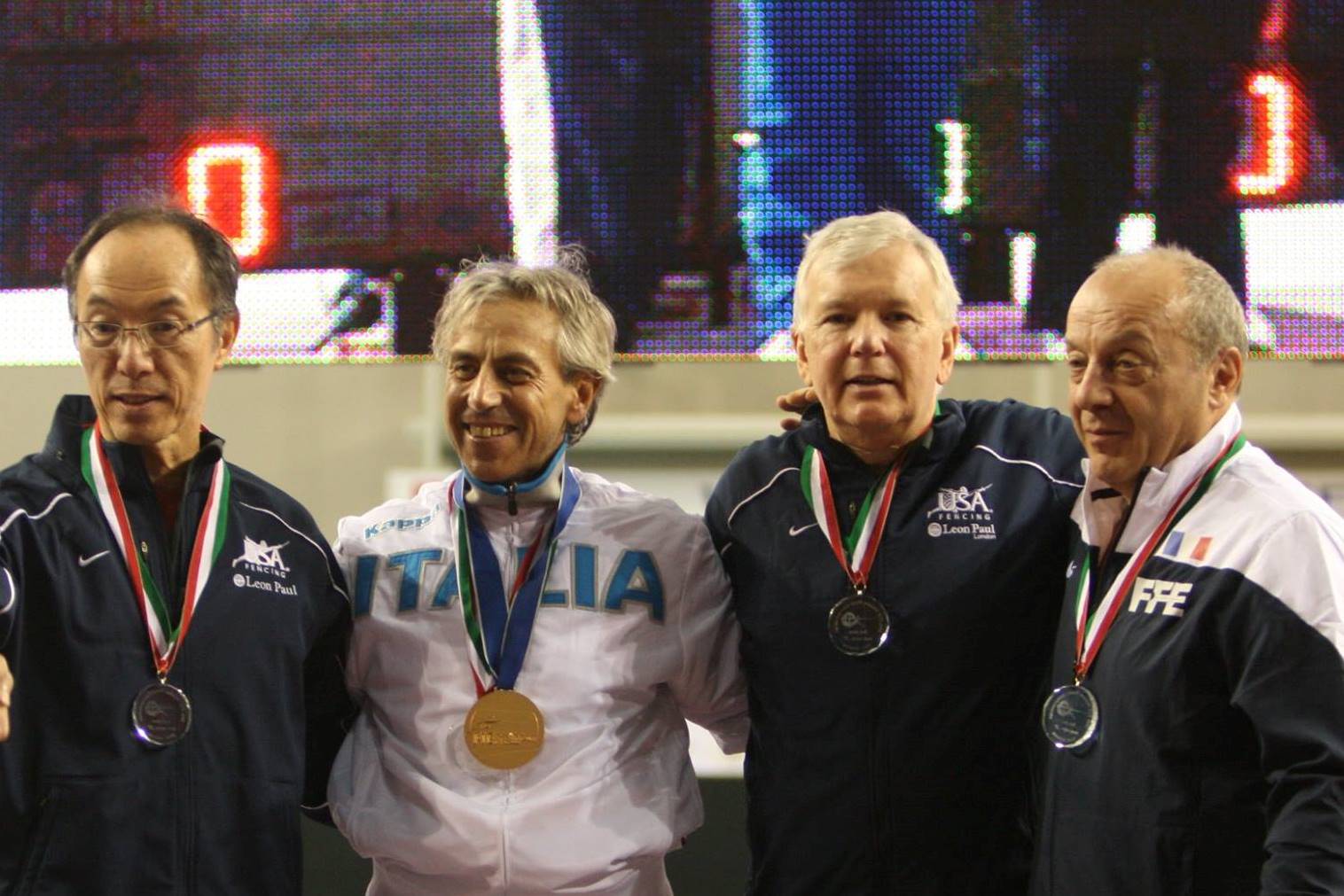 Yung won silver and Seuss took bronze in the 60-69 men’s saber event during the third day of competition at the Veteran World Championships.

Both Yung and Seuss went 4-2 in the pool rounds, but each rebounded with commanding victories in the DEs.

Seuss, the defending Vet World Champion, ended the day with a bronze medal after a 10-8 loss to Pasquale Parisi (ITA) while Yung defeated Patrick Pele (FRA), 10-7.

Yung, who won gold in 2011, lost his final bout to Pele and brought home the silver.

Two years after winning gold at the 2012 Vet Worlds in the 50-59 saber event, Will Milne (Redwood City, Calif.) returned to the international stage, but fell short of the podium with a ninth place finish.

Seeded second out of the pools, Milne defeated Cesar De Francisco (ESP), 10-3, in the table of 32. Milne’s table of 16 bout came down to the wire, but Filippo Carlucci (ITA) scored the final touch and went on to take gold.

Uschi Szpak (Trophy Club, Texas) earned her third top-eight result at the Vet Worlds with an eighth-place finish in the women’s 50-59 foil event.

In the quarter-finals, Szpak fenced Liudmila Chernova (RUS) who won the bout, 9-5, and went on to claim her sixth title in the event.

Szpak’s teammate, Viveka Fox (Virgennes, Vt.), nearly upset Chernova in the previous round, but lost by a touch, 3-2, after a table of 32 win against Silvana Esposito (ITA), 10-7.

Kristin Vines (Hixson, Tenn.) also advanced to the table of 32 where she defeated Annabelle Slowiaczek (AUS), 10-4. Vines lost her table of 16 bout to Gabriela Shand (CAN), 10-8.

Lynn Botelho (Indiana, Pa.) finished the pool rounds with a 2-4 record, but did not advance to the direct elimination tables.

The U.S. Women’s Epee Team fenced for bronze, but finished fourth in the team competition.

The win gave Team USA a fourth seed in the quarter-finals where the Americans won the match against Japan, 30-15.

Team USA fenced France again in the semis, but lost the match, 30-18.

The Americans narrowly missed bronze after losing a close match against Finland, 29-26.

In the direct elimination tables, Team USA lost to Russia, 30-19.