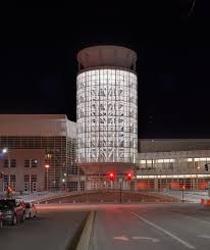 The Salt Palace was home to the Main Media Center during the 2002 Olympic Games.

(Colorado Springs, Colo.) – More than 1,100 athletes from at least 40 states will compete at the USA Fencing January North American Cup in Salt Lake City from Jan. 9-12.

Athletes will fence in four competitions, including Division I, junior and wheelchair individual events and a senior team event. All events will take place in Halls B-E of the Salt Palace. Admission to the tournament is free and open to the public.

Three Senior World Team Champions will be in action in Salt Lake City as well. After winning bronze in the team saber competition in 2013, Eliza Stone (Chicago, Ill.) and Ibtihaj Muhammad (Maplewood, N.J.) won gold in 2014. Ben Bratton (New York City, N.Y.) took nearly two years off after winning gold with the men’s epee team at the 2012 World Championships and is now training for the 2016 Olympic Games.

The wheelchair events are highlighted by five Paralympic athletes. Gerard Moreno (Los Angeles, Calif.) fenced at his fourth Games in London while his teammates, Ryan Estep (Florence, Miss.) and Joey Brinson (Florence, Miss.), are aiming to qualify for a second Paralympic team in 2016. Andrea De Mello (New York City, N.Y.), a four-time Paralympian who represented Brazil from 1996-2004 and Team USA in 2008, will be fencing in her first event since 2012. Sydney Paralympian Curtis Lovejoy (College Park, Ga.) won silver at the 2013 Wheelchair Worlds and has competed at six Paralympic Games in swimming and one (2000) in fencing.

Competition schedule is as follows (Note: all times are approximate start times and events run through completion):