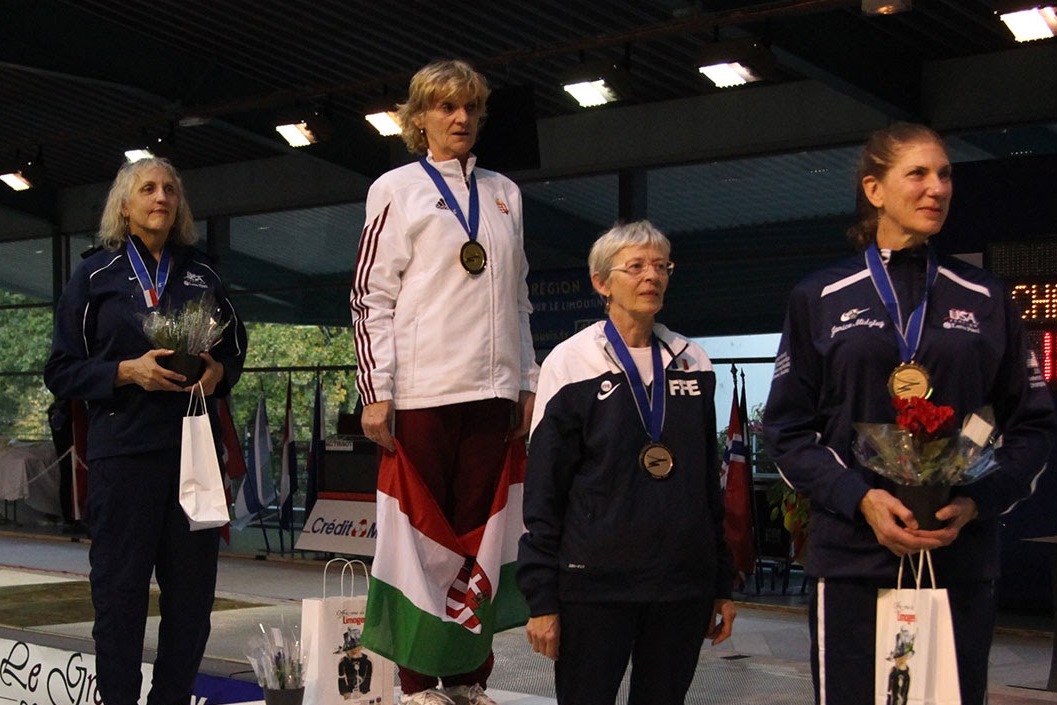 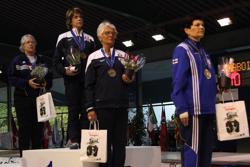 Kocab finished the pool rounds as the only athlete in the 34-person field to go undefeated while Midgley earned the 10th seed in the direct elimination tables and a bye into the table of 32.

Kocab cruised through her first DE bout with a 10-2 win against Kate Elvin (GBR) and went on to defeat Eliane Guillaud (FRA), 10-5, to advance to the quarter-finals where she won her bout against 2012 Vet World Champion Corine Aubailly (FRA), 10-6.

In a repeat of their semifinal bout at the 2013 Vet Worlds, Kocab fenced two-time Vet World medalist Brigitte Delacour (FRA) and outscored her opponent, 6-5.

The gold medal bout would pit Kocab against Ibolya Hoffmann (HUN) – her opponent from the 2014 Vet World semis. Hoffmann won the bout, 10-9, and became the first person to defeat Kocab at a Vet Worlds since 2012.

Midgley secured a medal with a 10-6 win against Jane Clayton (GBR) in the quarters, but lost her semifinal bout to Hoffmann by a 10-5 score.

Tanya Hurley (Hillsborough, N.J.) placed 10th in her Veteran World debut. Hurley earned a bye into the table of 32 where she defeated Antonella Parpaiola (ITA), 10-6. Hurley fenced a close table of 16 bout before falling to Ernone Kolzonay (HUN), 10-8.

A three-time bronze medalist at the Veteran Worlds, Patricia Bedrosian (Malibu, Calif.) won her first silver medal at the event in the +70 women’s epee competition.

Seeded third out of the pools, Bedrosian earned a bye into the table of 16 where she defeated Carole Seheult (GBR), 10-7.

Fencing for gold, Bedrosian took on Marie Chantal Demaille (FRA) – a dominant competitor who won the +70 epee, foil and saber gold medals at the last two Vet World Championships. Bedrosian took the bout to a full two periods, but Demaille earned the win, 9-6.

Catherine Radle (Atlanta, Ga.), a bronze medalist at the 2014 Vet Worlds, earned a top-eight finish in Limoges after a 7-3 win against Dinie Evers (NED) in the 16 and a 10-5 loss in the quarters to Irma Lindeman (FIN) who defeated first-time team member Sally Higgins (Tinton Falls, N.J.), 10-6, in the previous round.

In the men’s saber competition, Larry Pinkus (Kensington, Md.) returned to the podium in his first year as a +70 fencer after winning gold in the +60 category in 2005 and silver in 2006.

Pinkus went undefeated in pools to earn the No. 1 seed in the direct elimination rounds where he earned a bye into the table of 16. Pinkus won his bout against Gyorgy Budai (HUN), 10-3, and defeated his teammate, five-time Vet Team member Peter Calderon (Plainsboro, N.J.), 10-5, in the quarters.

In the gold medal final, Pinkus faced Andre Chaboisseau (FRA) whose last podium finish was a bronze behind Pinkus in 2005. Chaboisseau controlled the bout to win his first Vet World title by a 10-4 score.

Five-time Vet World Team member Jamie Douraghy (Los Angeles, Calif.) earned his best result at the event with an 11th place finish in the day’s largest event with 53 competitors. Douraghy earned a bye into the 32 where he defeated first-time team member Greerson McMullen Sr. (Atlanta, Ga.), 7-6. In the table of 16, Douraghy lost to Marco Bosio (ITA), 10-7.