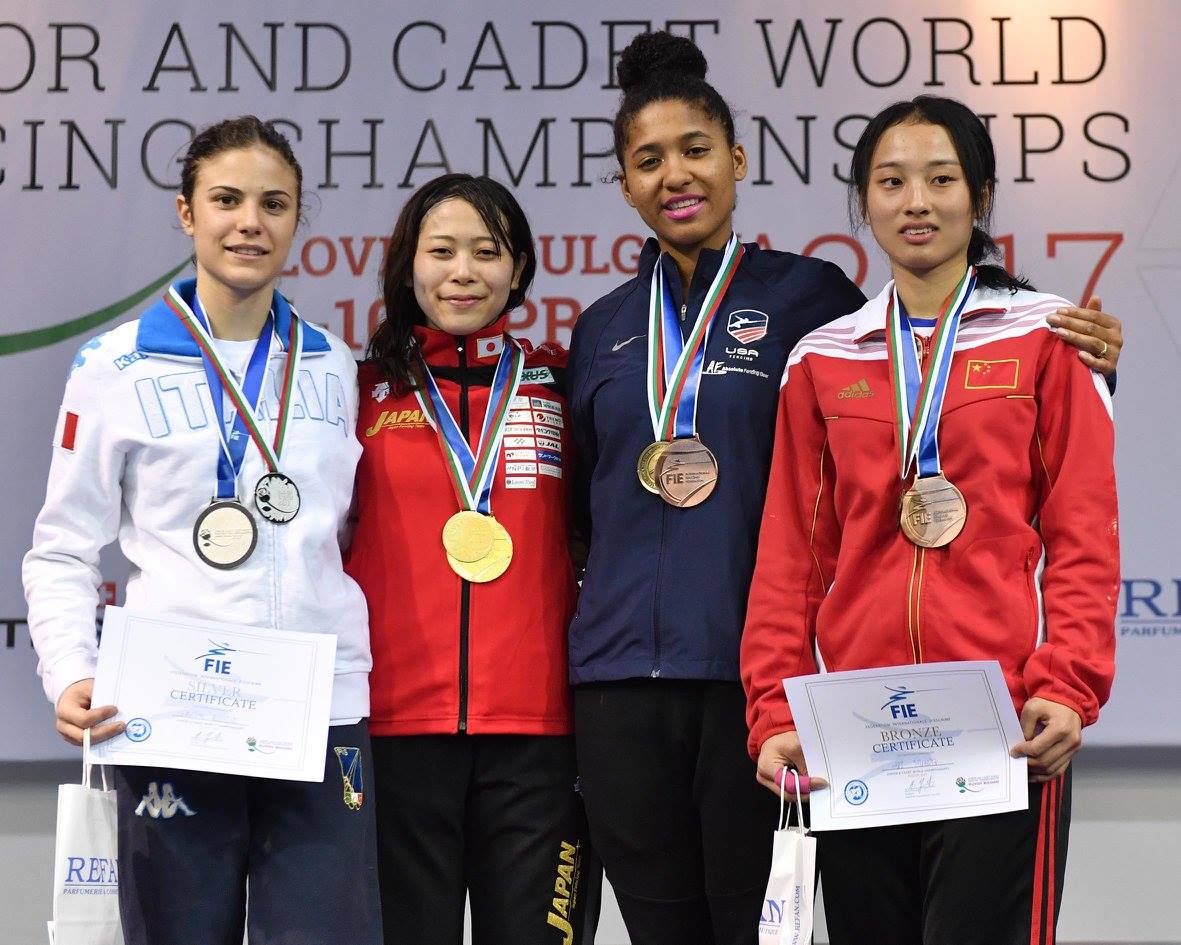 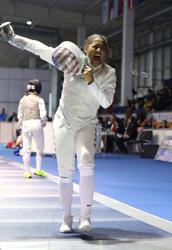 (Colorado Springs, Colo.) – Iman Blow (Brooklyn, N.Y.) has stood on the Junior Worlds podium twice in past years, winning silver as a team fencer in 2015 and 2016, but her final appearance on the junior circuit was Blow’s chance to see the American flag rise for her as an individual.

The Columbia sophomore finished the pool rounds at 5-1 and followed a 15-13 win over 2017 Cadet Pan American Champion Katina Proestakis (CHI) in the table of 64 with a pair of 15-8 victories against 2017 Junior European bronze medalist Victoria Yusova (RUS) and 2014 Junior World medalist Karin Miyawaki (JPN).

Blow would take on three Japanese fencers during the direct elimination rounds and her quarter-final opponent, Sumire Tsuji, entered the round with confidence after a 15-8 victory win against Marta Martyanova (RUS) – the event’s top seed who won silver at the Absolute Fencing Gear® FIE Grand Prix Long Beach as an 18-year-old last month. Blow led the bout, 9-7, at the break, but Tsuji came back to tie the score at 13 in the second period. Undeterred, Blow secured a medal with the next two touches and a 15-13 win to qualify for the semifinals.

In the semis, Komaki Kikuchi (JPN) pulled away from a tie at nine to close the first period with an 11-9 lead. Kikuchi controlled the second period early, scoring four straight to win the bout before going on to take gold.

As the 2016 Junior World Champion and a three-time Senior World Team member, Notre Dame sophomore Sabrina Massialas (San Francisco, Calif.) was labeled as the one to watch coming into the event, but an overtime loss left the former Youth Olympic Games Champion with a fifth place finish.

Massialas finished the pools undefeated and earned the No. 2 seed in the DEs where she opened with a 15-5 win over Anca Saveanu (ROU) in the table of 64 and defeated Julia Walczyk (POL), 15-8, to advance to the 16.

Massialas won her next bout, 15-10, over Janka Toth (HUN) and was up, 7-3, in the second period against 2015 Cadet World silver medalist Serena Rossini, before the Italian slowly began to claw her way back into the bout. Late in the third period, Massialas led the bout, 11-9, when Rossini tied the score at 11 to send the bout to overtime. Rossini took the win, 12-11, and went on to claim the silver medal.

Sylvie Binder (Armonk, N.Y.) finished in the top 16 in her first full year as a junior after winning gold at the 2016 Cadet Worlds and bronze in 2015.

Notre Dame sophomore Elyssa Kleiner (San Francisco, Calif.) qualified for her first Junior World Team in her final year of eligibility and ended the day with a 2-1 DE record and a top-32 finish.

A 4-2 result in pools left Kleiner with a 49th seed in the table of 128, but she won her first two direct elimination bouts by significant margins, defeating Stepanka Nemcova (CZE) and Kitti Bitterova (SVK) by 15-7 and 15-6 scores, respectively.

In the table of 32, however, Kleiner fell to two-time Junior Pan Am Champion Gabriela Cecchini (BRA), 15-10.

Wesley Johnson (Pleasant View, Utah), the reigning Junior Pan Am Champion and Princeton sophmore, finished in the top 64 at his first Junior Worlds.

Sean Wilson (Houston, Texas), a member of the U.S. team that won gold in the mixed team event at the 2016 Cadet Worlds, was eliminated in the first direct elimination round at his first Junior Worlds.

In the opening day of team competition, but the U.S. Women’s Epee and Men’s Saber Team advanced through the 16 with the quarters being held on Saturday.

In the 16, the chance to return to the podium after winning bronze in 2016 would be on Nixon’s shoulders as Team USA was tied with Hungary at 20 going into the anchor leg. After a fast and furious final bout, Nixon defeated Eszter Muhari, 17-15, to secure a 37-35 win for Team USA.

Up by just one touch going into the final bout against Hungary in the 16 at 40-39, Metryka secured the 45-42 win for Team USA with a 5-3 victory against Vilmos Szlama.

Top eight and U.S. results in the individual events are as follows: