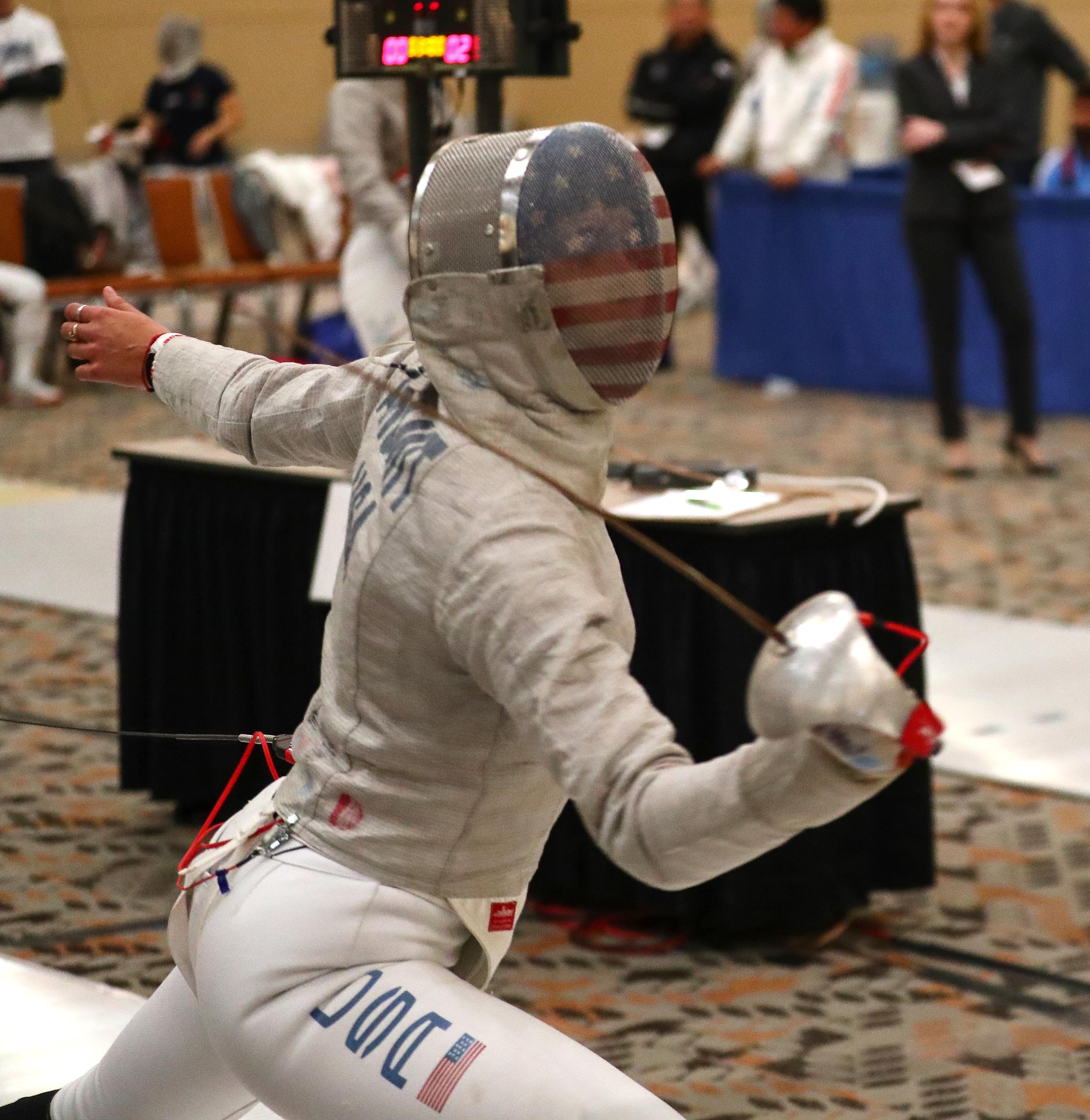 Monica Aksamit finished pools with a perfect record to advance to the table of 64. Photo Credit: Manky / Bizzi

(Baltimore, Md.) – With only one fencer exempt from the pool rounds, Team USA had 11 total fencers advance through the preliminary day of competition at the Baltimore Women’s Sabre World Cup on Friday to compete in the table of 64 on Saturday.

Rio Olympic team bronze medalist Dagmara Wozniak (Avenel, N.J.) earned Team USA’s first position in the table of 64 as an exempt fencer due to her top-16 seed in the tournament. On Saturday, Wozniak will begin her day with a 64 bout against Karen Ngai Hing Chang (HKG).

Her Rio teammate, Monica Aksamit (Matawan, N.J.), fenced in the pool rounds on Friday and won six straight bouts to advance directly to the second day of competition.

Aksamit drew a challenging pool that included former Senior World medalist Bogna Jozwiak (POL) and Tori Johnson (Peachtree City, Ga.), a 2017 Cadet World Team member who is in contention for the 2018 Senior World Team as the No. 6 senior fencer in the nation.

Aksamit won all six of her bouts to secure her position as the No. 23 seed in the 64.

Prior to the World Cup, Aksamit, Wozniak and their teammates participated in an international training camp in Maryland which she said helped prepare Team USA for the event.

“It was great. We had the Japanese, Ukrainians, the French, so it was good bouting through and through,” said Aksamit who noted that she enjoys the opportunity to fence in the United States during one of the eight stops on the World Cup circuit. “We have a good turnout, so there’s a lot of people cheering for you here. It’s incredible. Seeing the world is great, but it’s nice to be here, understanding the lay of the land, knowing who’s here. I’m more comfortable with it.”

On Saturday, Aksamit will fence 2016 Cadet World medalist Sarah Noutcha (FRA) in the table of 64.

“Tomorrow’s a new day, so tough to say what will happen. I can’t look at today and go ‘oh, okay I was fencing great today so that means I’ll be fencing great tomorrow,’ but it’s obviously a good feeling and it’s good to go in with confidence knowing that today I was able to move well and make those right decisions and fenced well today,” Aksamit said.

Eliza Stone (Chicago, Ill.) also got the tournament off to a good start with a 5-1 pool finish, dropping her sole bout of the day by a 5-4 margin.

The 2014 Senior World Team Champion is seeded 25th and will fence Bhavani Devi Chadalavada Anandha Sundhararaman (IND) in the 64.

Eight members of Team USA advanced to the second day through wins in the preliminary tables with the stakes high as athletes eye qualification points for the 2018 Senior, Junior and Cadet World Teams.

A two-time Cadet World Team member, Sarah Merza (Wayne, N.J.) just missed the cut for the top 16 with a 5-1 result in pools. Seeded first in the preliminary DE tables, the Ohio State junior earned a bye into the preliminary table of 64 where she defeated teammate Veronica Czyzewski (Caldwell, N.J.) Merza will fence Michela Battiston (ITA) in the 64 on Saturday.

Two-time Junior World team medalist Francesca Russo (Wayne, N.J.) also finished 5-1 and earned her first trip to the 64 this season with a 15-11 win over teammate Alexis Anglade (Alpharetta, Ga.) On Saturday, the Notre Dame senior will fence Sooyeon Choi (KOR) in the table of 64.

Ranked No. 7 in the United States, Kamali Thompson (Teaneck, N.J.) is hoping a high finish in Baltimore will aid in her bid to qualify for her first Senior World Team as one of the top four U.S. fencers in the nation later this year. The 2016 National Champion went 4-2 in pools and bested 2014 Junior World Championships bronze medalist Gracie Stone (Chicago, Ill.) to make the 64. On Saturday, Thompson will fence Martina Criscio (ITA) – a 2017 Senior World Team Champion who won individual bronze at this event last year.

Air Force Academy sophomore Leanne Singleton-Comfort (Marysville, Calif.) qualified for the top 64 at her second ever World Cup appearance when this event was held in Brooklyn last year and continued her success in Baltimore. After a 4-2 pool finish, Singleton-Comfort defeated 2015 Junior World Team Champion Sofia Ciaraglia (ITA) and will fence 2017 World University Games bronze medalist Misaki Emura (JPN) in the 64.

Zara Moss (Cranberry Township, Pa.), a 2017 Junior World Team member, is aiming to qualify for both the junior and senior teams in 2017. After earning a top-64 result at her first Senior European World Cup in Athens last year to qualify for the 2017 Junior World Team, the Penn State freshman has won four Division North American Cups in just over a year and earned top-64 results in both Orleans and St. Niklaas last fall to climb the U.S. rankings to No. 5. On Friday, Moss finished 4-2 in pools and bested 2007 Senior World medalist Bogna Jozwiak (POL), 15-6, to earn a spot in the 64. Moss will fence 2017 Senior World Team Champion Loretta Gulotta (ITA) in the 64 on Saturday.

One of Moss and Tartakovsky’s top opponents for those positions on Team USA is Chloe Fox-Gitomer (Portland, Ore.) – her teammate with both athletes on the 2017 Junior World squad. A high school senior, Fox-Gitomer is now the No. 3-ranked senior and No. 2-ranked junior in the nation. With a 3-3 pool finish, Fox-Gitomer would need two victories to qualify for the second day. She earned a decisive victory over two-time Junior World Team member Celina Merza (Wayne, N.J.) at 15-7, and picked up at 15-14 comeback win over Xiaoye Jia (CHN) to make the 64 where she will fence Rossella Gregorio (ITA) – a 2017 Senior World Team Champion who won medals at two of the first three events of the season.

Kara Linder (Chandler, Ariz.) – who fenced at the 2017 Junior Worlds with Moss, Tartakovsky and Fox-Gitomer – took on one of her top opponents in the Junior National Team Point Standings to claim a spot in the table of 64. A gold medalist in the mixed team event at the 2016 Cadet Worlds, Linder ended the pool rounds with a 3-3 record and defeated both Shinhui Choi (KOR) and Ryan Jenkins (San Juan Capistrano, Calif.) to make the second day. Linder will fence 2016 Olympic Champion Yana Egorian (RUS) in her opening bout on Saturday.

Results for U.S. fencers who did not advance to the second day of competition are as follows: