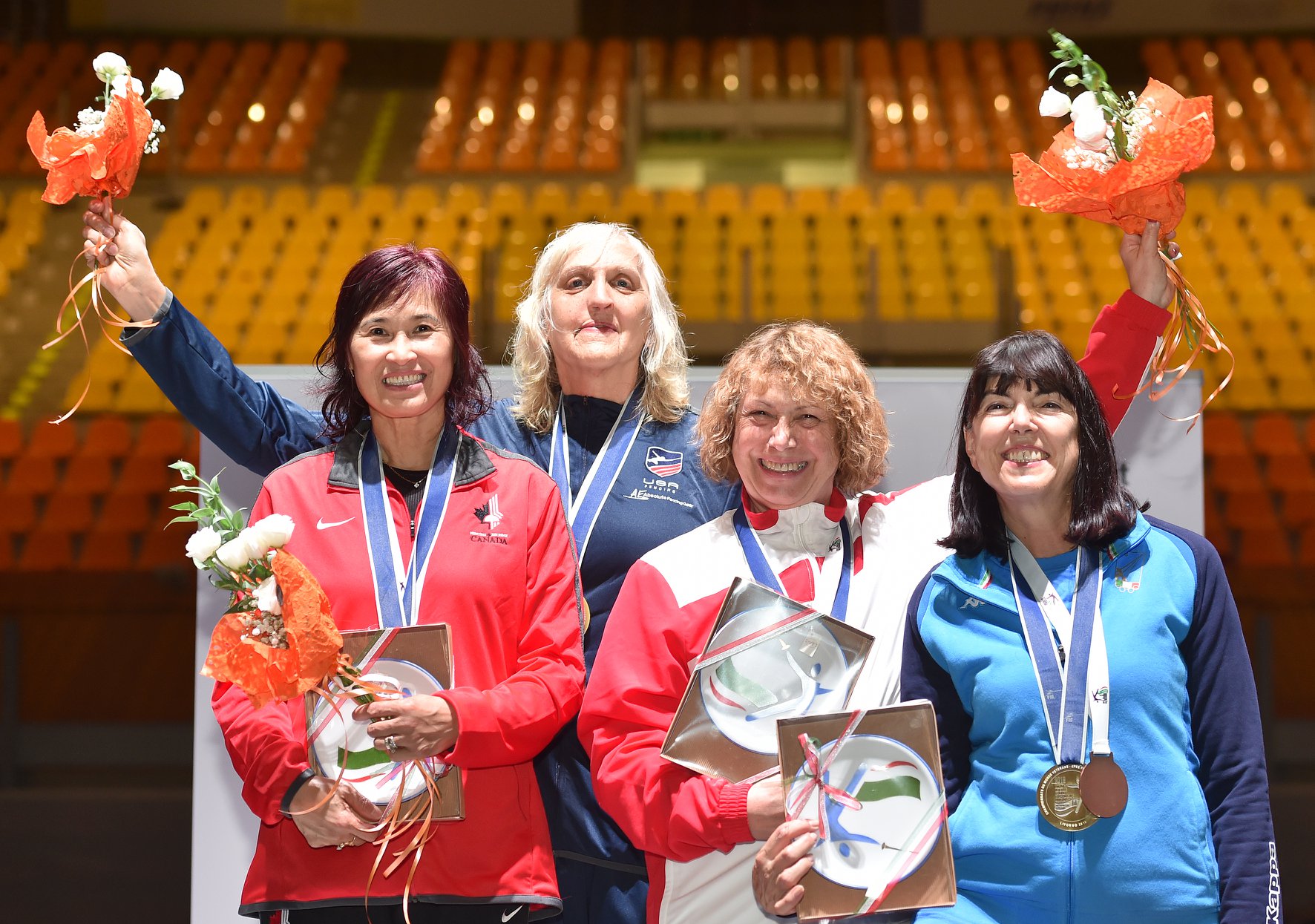 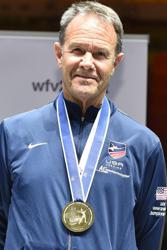 (Colorado Springs, Colo.) –Liz Kocab (Farmington Hills, Mich.) returned to the top step of the podium on the opening day of Vet Worlds, adding a fifth gold medal to her collection.

Kocab’s podium finish was one of two for Team USA on Tuesday as Jan Patterson (Seattle, Wash.) won bronze for the second consecutive year in +70 men’s foil.

After winning six straight Vet World medals from 2011-2016, Kocab missed the podium last year, but was unstoppable in Livorno, Italy, going undefeated for her fourth individual title in Veteran 60-69 épée and fifth overall.

Kocab took control of her semifinal bout, posting a dominant 10-4 victory over Agota Balot (AUT), and in the final Kocab prevailed over Jujie Luan (CAN), 9-4, for the title.

Caroline Rich (Reno, Nev.) claimed a top-16 finish at her first Vet Worlds, defeating Yoriko Yamada (JPN), 10-3, before narrowly missing out on the quarter-finals as she was edged out by Luan, 10-9.

In the 16, the 13-time Vet World Team member held off Thomas Klein (GER), 9-8. Patterson clinched a medal with a 10-4 victory over Gyorgy Liptak (HUN), but lost by the same score in the semis to Paul Graham (GBR).

Both seven-time Vet World Team members, Campana and Calderon earned byes to the 32, but Campana dropped his bout to Socrate Abdoukadyrov (FRA), 10-3, while lost to Gari Aftandilov (RUS), 10-6.

Sessions moved into the 32 with a 10-3 win against Ferdinando Cappelli (ITA) before losing to Graham, the eventual silver medalist, 10-1.

In the men’s 60-69 foil competition, Team USA had two members finish in the top 16 with each coming up just one point shy of advancing to the quarter-finals.

2017 bronze medalist Thomas Lutton (Cupertino, Calif.) looked poised for another podium run with a 10-2 win against Elie Newman (CAN) in the table of 64, but he suffered a 10-8 loss the following round to Francois Lecuyer (FRA).

Philippe Bennett (New York, N.Y.), a five-time Vet World Team member, outscored Alexandr Zagorulko (RUS), 7-3, in the 64 before having his day ended with a 10-5 loss to Boris Agronovitch (ISR).

A six time medalist at Vet Worlds, Diane Kallus (Round Rock, Texas) easily handled her table of 32 bout, cruising past Iris Gardini (ITA), 10-2, before losing by one point to Irma Lindeman (FIN), 10-9.

However, in the next round, they drew the top two seeds. Aher couldn’t hold on against No. 1 seeded Marja-Liisa Tuulikki Someroja (FIN), losing 10-5. Julien lost her chance at a second straight year on the podium with a 10-2 loss to No.2 seed, Marie Chantal Demaille (FRA). Someroja and Demaille went on to win gold and silver.

Gemin Channing (Frederick, Md.) nearly joined her teammates in the table of 16, but lost to Martine Schirmer (FRA), 10-9.

In the women’s 50-59 women’s épée competition, all four members of Team USA earned byes into the table of 64.

Competing at her first Veteran World Championships, Sharrie Zafft (Worthington, Mass.) came up on the winning side of a 10-9 score in the table of 64, overcoming Siobhan Moss (CAN). However, the following round saw Zafft’s day ended with a 10-5 defeat to Christine Zoppke (GER).

Cristina Ford (Salem, Ore.), the most experienced fencer for the U.S. in the category as a five-time team member, outscored Paulina Close (ESP), 9-4 before falling to Frauke Hohlbein (GER) by a 10-4 score.

Competition continues on Wednesday with the following events: