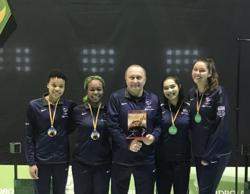 Ranked fourth coming into the tournament, Team USA won or tied six of its nine bouts against Great Britain with Honor Johnson anchoring the squad to a 45-36 victory and all three fencers (Jenkins, Johnson and Burke) posting positive indicators.

Tori Johnson returned to the lineup as anchor in the next match against France and Team USA controlled the match from the start, building a 14-touch lead after the first two rotations at 30-16 and finishing the match with eight bout wins or ties and a 45-36 victory.

In the semifinals, however, Russia, the reigning Junior World Champions, took an early lead and never let up, defeating the Americans, 45-32, and ending the day with a silver medal and the No. 1 junior world ranking.

Team USA fenced Bulgaria for bronze and led a close match, 30-26, after the sixth bout. Honor Johnson helped the Americans pull away in the seventh, however, besting Simova Nedyalkova, 5-2, for a 35-28 lead. After moving into the setup role, Tori Johnson shut out Teodora Vutova, 5-0, to increase the margin to 12 at 40-28. Burke came in as anchor, closing out the match against Junior World No. 3 Yoana Ilieva for a 45-33 win.

Seeded 41st in the table of 128, Tartakovsky soon began picking off her opponents, defeating Bianka Kern (HUN), 15-11, and following with a 15-10 win over Jenkins. In the 32, Tartakovsky faced Anne Poupinet, a member of France’s senior traveling squad, who was coming off a win against 2017 Junior World Champion Natalia Botello (MEX) in the table of 64. Tartakovsky took the win, 15-9, and edged Burke in the 16, 15-14. In the quarters, however, Tartakovsky lost her bout to 2018 European Champion Alina Mikhailova (RUS), 15-8, who went on to win gold.

Tori Johnson and 2018 Junior World team silver medalist Chloe Fox-Gitomer (Portland, Ore.) sit in first and second in the standings with Burke and Jenkins in third and fourth. Alexis Anglade (Alpharetta, Ga.), a 2018 Cadet World bronze medalist is in fifth.