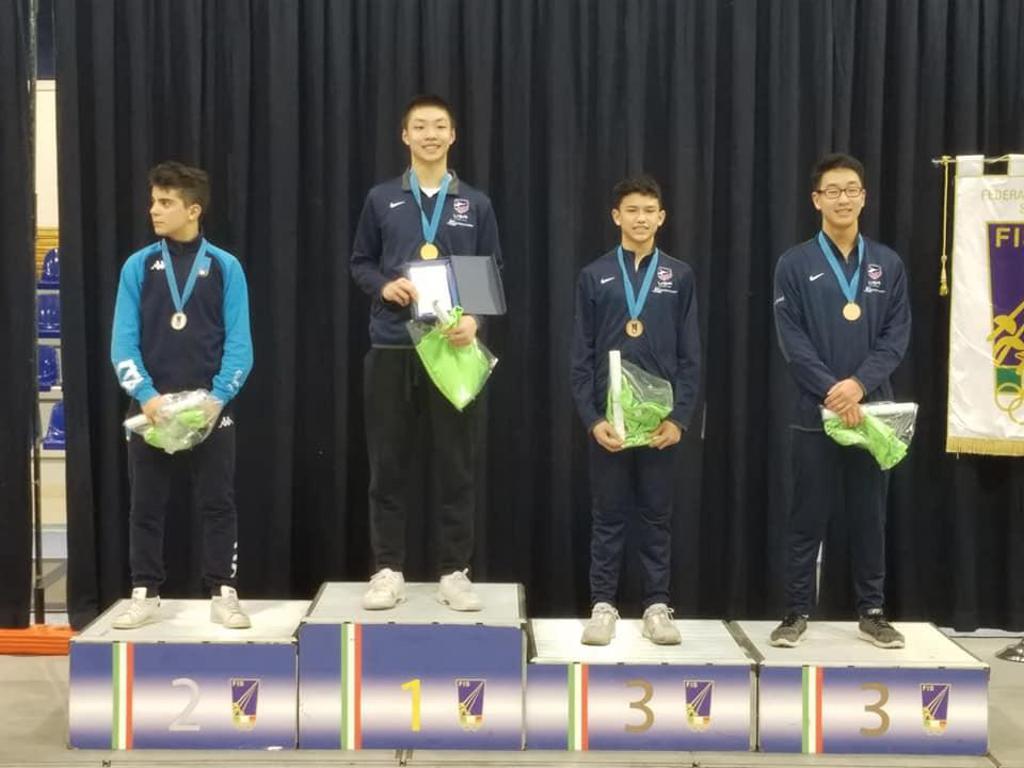 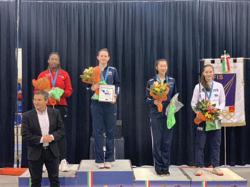 (Colorado Springs, Colo.) – Team USA claimed five of the eight medals, including both golds, at the Rome Foil Cadet European Cup this past weekend.

Chen’s gold marks his second medal on the circuit this season and his first Cadet European Cup title.

Chen guaranteed a medal with a 15-12 win over Matteo Panazzolo (ITA) and earned the chance to fence for gold with a 15-9 victory over Emmer.

In the gold medal final, Chen edged out Tommaso Martini (ITA), who was fencing in front of a home crowd, by a score of 15-12.

Fourteen-year-old Emmer started his day perfect in pools, going 6-0 to take the No. 4 seed.

With a 15-12 victory over Paul-Antoine De Velval (FRA), Emmer clinched the bronze before losing to Chen in the semifinals.

Yu’s bronze is his second medal this season at a Cadet European Cup.

A 15-11 victory over Gregorio Isolani (ITA) and a 15-10 win against Florent Baudchon (FRA) secured Yu a medal, but he couldn’t hold on against Martini in the semifinals, falling 15-7.

With just weeks until the Cadet World Championship Team is named, Chen moved up to No. 1 in the USA Fencing Cadet Men’s Foil Team Point Standings. James Liao (Basking Ridge, N.J.) ranks second and Yu jumped up into third, fewer than 30 points behind Liao. Emmer is now in fourth with Bryce Louie (Los Angeles, Calif.) in fifth.

In the women’s event, Yaroshenko made her first Cadet European Cup medal a gold.

Taking the No. 4 seed out of pools with a 6-0 record in pools, Cho held all five of her opponents to single digits to reach the semifinals.

In the first two rounds, she picked up quick 15-8 and 15-4 victories over Xenia Maul (GER) and Mayuri Muralidharan (AUS), respectively. She then followed up a 15-6 win over Celia Hohenadel (GER) with a 15-8 victory against Flaminia Zaccheo (ITA).

Facing Zander Rhodes (South Orange, N.J.), who currently ranks No. 3 in the Cadet European Fencing standings, in the quarter-finals for a medal, Cho continued to roll, winning 15-5.

Rhodes moved up to No. 2 in the USA Fencing Cadet Women’s Foil Team Point Standings with her top-eight finish, sitting behind 2018 Junior World bronze medalist Lauren Scruggs (Ozone Park, N.Y.) Maia Weintraub (Philadelphia, Pa.), who finished in the top 16 in Italy, is not far behind Rhodes in third, trailing by fewer than 50 points. Nicole Pustilnik (San Diego, Calif.) and Helen Tan (San Diego, Calif.), who also earned a top-16 result, sit in fourth and fifth.