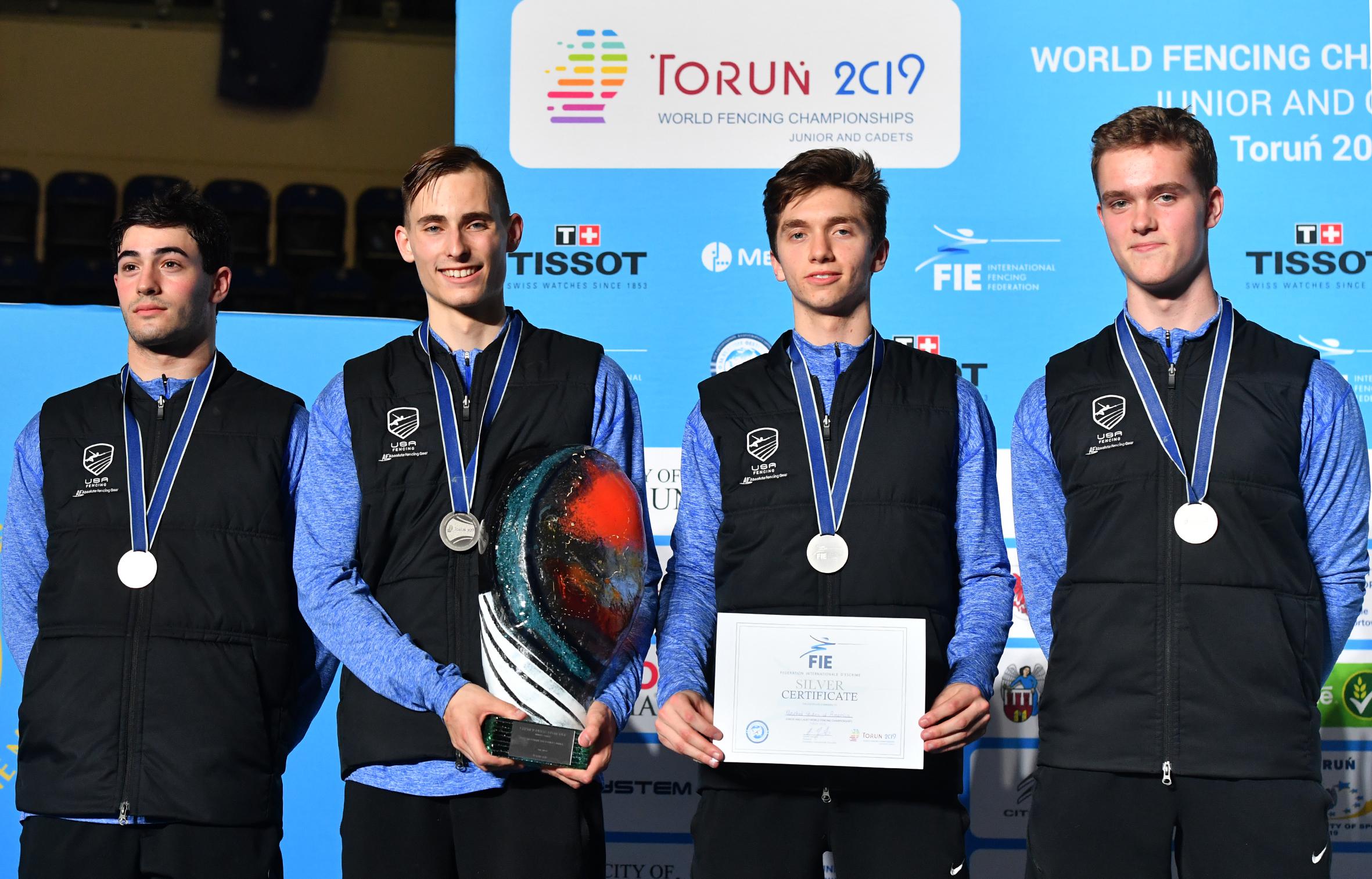 In 1999, a trio of young fencers whose names fencing fans would recognize for years to come won the first ever medal at the event for the men’s epee team, taking bronze. That team included three fencers who would go on to qualify for the Athens Olympic Team just five years later: Seth Kelsey (Portland, Ore.), Soren Thompson (New York City, N.Y.) and Jan Viviani (Jersey City, N.J.)

This year, history would be made by two returning members of the 2018 Junior World Team that fell to China in the table of 32 last year in Stephen Ewart (Lancaster, Calif.) and Jonathan Piskovatskov (Houston, Texas) as well as 2018 Cadet World Team member Isaac Herbst (Houston, Texas) and first-time team member Cedric Mecke (New York City, N.Y.)

Following the loss at last year’s World Championships, the team rebounded with its most successful season yet – winning silver at the Riga World Cup in November and gold in Belgade in February followed by a gold medal finish at the Junior Pan Ams in March.

The team came in motivated not just to improve on last year’s results, but to reach the podium the team narrowly missed in 2017 with a fourth-place finish.

In fact, Team USA would not only match the 1999 team’s result, but beat it, earning the squad’s first ever silver medal in Junior World history.

But the history-making win almost didn’t happen when the Americans came up against Azerbaijan in the table of 32 and found themselves trailing by three at 40-37 after the first eight bouts.

Ewart entered the bout as anchor against Ruslan Hasanov – the only fencer to have beaten him in pools in the individual event where Ewart finished in the top eight on Friday.

“I went into the anchor bout and their anchor, Hasanov, had beaten me in pools, 5-1, on Friday so I wasn’t super confident going in, but [Coach] Sergey [Danilov] had a great plan and the first touch I did exactly what the plan was and it worked great and I could just tell that it was ‘All right. Here we go. Gonna get the win,’” Ewart said.

“Last year was very fresh in my mind. While that was going on, I remembered losing first round to China and I honestly thought at some point ‘Oh, this is going to happen again.’” Ewart said. “But when you look at our World Cups all season, we always start off almost losing some very close bout in an early round, but after that we just kind of shake it off and start doing what we know how to do.”

With the jitters shaken off, the Americans settled into the next match against Sweden, pulling away from a tie at 15 after the first three bouts to take the match, 45-34. Piskovatskov (+5), Ewart (+3) and Herbst (+3) each fenced in the match and posted positive indicators.

In the quarter-finals against Italy, Team USA held a three-touch lead at 15-12 after the third bout when Piskovatskov shut out Simone Mencarelli, 5-0, for a 20-12 lead. The Americans held on to their lead and their resolve not to give the Italians any room for hope in the next five bouts. Although the Italians came within four of Team USA by the end of the eighth bout, Ewart finished strong against Giacomo Gazzaniga with a 6-3 win to close the match at 45-38 and guarantee Team USA a position in the semifinals against France – a team the Americans lost to, 45-43, in the finals of the Riga World Cup with Ewart ending with an 11-5 run against anchor Lilian Nguefack.

The situation would be eerily similar in Torun with France building a 35-30 lead after the first seven bouts. Piskovatskov, a 2017 Cadet World medalist, brought Team USA’s score to 33 in the setup bout before Simon Contrepois took four to end the bout with a seven-touch lead at 40-33.

“I went out for the final bout and Jonathan said ‘I’m sorry. I know you wanted me to come back’ and I said ‘That’s one more than Riga!’’ Ewart recalled, always keeping it positive. “As soon as he got to 33, I knew that 33 was better than 32 and that’s what we had in Riga and that gives me a better shot.”

In the anchor bout, Ewart would fence Nguefack again in a rematch of their bout in Riga.

Ewart scored five touches to cut France’s lead to 42-38 with just under two minutes remaining in the bout, but got hit with a double and then a single as Nguefack built a 40-44 lead.

Ewart remained focused, picking off four straight singles as the crowd yelled and the U.S. Women’s Epee Team, fresh off a 45-42 heartbreaking loss to Russia in the semis, rushed to the men’s strip to cheer for their teammates.

For the final touch, Ewart pushed Nguefack down the strip and the Frenchman went for three straight toe touches.

Ewart had nothing to fear however, as he attacked and scored the single for a 45-44 win.

“Once I started making the comeback, I was scared to lose, but I never thought I couldn’t do it,” he said. “The energy from everybody watching really helped. The girls [team] cheering for us, I really have to shout them out because that really helped.”

In the final match, however, the Americans struggled against Hungary and were never able to gain ground. Herbst and Piskovatskov earned two wins in the first four bouts, but the Hungarians pulled away from a tie at 15 to take five straight wins and earn gold, 45-31.

“Given how we’ve done this season, I really thought we could win gold, but that was just a different Hungary team that showed up today and it showed,” Ewart said. “Great bout, great day. I was confident in this team and knew we could get a medal. I’m just disappointed it wasn’t gold.”

With four medals to its credit this season out of five events in which the team competed, the U.S. Men’s Epee Team ended the season as No. 2 in the world rankings for the first time ever.

The historic podium finish also comes during a season in which the senior men’s epee team had fencers win individual medals on the World Cup circuit for the first time since 2011 with Jacob Hoyle (New York City, N.Y.) earning bronzes at the Doha Grand Prix and Vancouver World Cup and Curtis McDowald (Jamaica, N.Y.) following with bronze at the Budapest Grand Prix in March

“I think the program has evolved a lot and you can see that in the senior results with Jake and Curtis,” Ewart said. “That’s a pretty prominent example. I think men’s epee has started to do a lot better in the U.S. and that trickles down to the junior level and the cadet level as well. I’m excited to see what’s coming up in the future.”

On the women’s side, Team USA entered the Junior Worlds with medal finishes in all four events this season as well as a bronze medal win in the individual event by team anchor Greta Candreva (Katonah, N.Y.) and a top eight finish from Emily Vermeule (Cambridge, Mass.) who missed the podium by a single touch in the quarter-finals.

Team USA got the day off to a solid start in the table of 32 defeating Finland, 45-33, with Candreva, Vermeule, Karolina Nixon (Los Angeles, Calif.) and Lola Constantino (Warren, N.J.) each fencing in the opening match.

In a rematch of their final at the Junior Pan Ams, the U.S. squad fenced Canada in the 16. With a 38-31 lead after the eighth bout, Candreva defeated 2019 Junior Pan Am bronze medalist Ariane Leonard, 7-4, to close the match with a 45-35 win for Team USA and a +12 indicator on the day.

The Americans fenced host nation Poland in the quarter-finals and controlled the match from the start with Vermeule (+6), Nixon (+5) and Candreva (+4) all contributing positive indicators for a 45-30 win.

Fencing No. 2 seed Russia in the semifinals, Vermeule, Candreva and Nixon combined for three bouts won or tied out of the first eight. With Russia up, 40-33, going into the anchor bout, Candreva picked up nine touches before Aizanat Murtazaeva closed the match at 45-42.

Team USA fenced Switzerland for bronze – a squad that upset top-ranked Italy, 45-34, in the quarter-finals and missed the gold medal match after a 45-44 loss to France. Focused from the start, Switzerland won or tied six of the first seven bouts against Team USA’s four fencers to take a 35-26 lead. Although Vermeule put up an 8-4 run against Aurore Favre in the eighth, Candreva couldn’t close the gap and was outscored by Angeline Favre, 6-4, for a 45-38 win.

Team USA finished the season as the No. 2 women’s epee team in the junior world rankings behind Russia who finished second to France in Poland.

On the final day of competition, Team USA finished third in overall medals with nine behind Russia at 10 and Italy at 18.