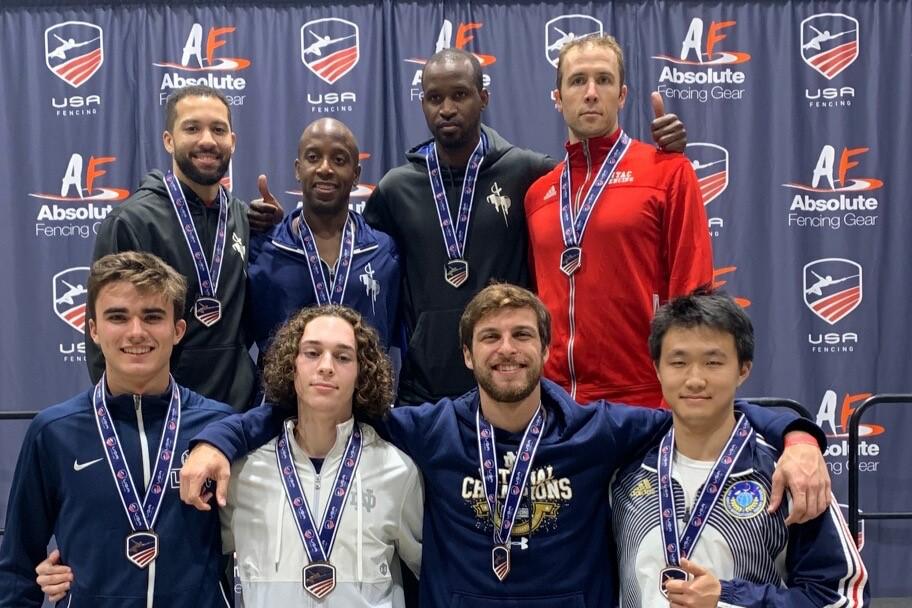 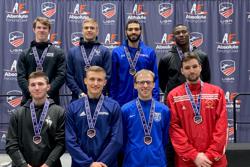 The 2015 Senior World Team member reminded fencing fans that he remains a top candidate for the 2020 U.S. Olympic Fencing Team with his gold medal win at the October North American Cup in Kansas City on Friday, Sept. 18.

Ramirez came out on top in a field of 255 competitors to win gold after coming through two rounds of pools in order to reach the top spot on the podium. Seeded 39th in the tournament, Ramirez just missed the top-34 bye into the second round received by many of his former National teammates and would need to fence 12 pool bouts before his first direct elimination round.

After two losses in the second round of pools, Ramirez earned a bye into the table of 64 as the 21st seed.

Ramirez took on his Peter Westbrook Foundation teammate, 32-year-old Dwight Smith (Elmont, N.Y.), who was fencing in the semifinals of a national event for the first time since 2005 after a 15-12 win over 2014 Junior World bronze medalist Justin Yoo (La Verne, Calif.) in the eight.

In the semis, Ramirez led the bout against Smith, 5-3, after the first period and ended the second at 9-5. Ramirez went on a 6-3 run in the third to end the bout with a 15-8 victory.

Ramirez would fence two-time Olympian Soren Thompson (New York City, N.Y.) in the finals as Thompson aims to add Tokyo to a resume that includes the 2004 and 2012 Games in Athens and London.

In the last round of the day, Ramirez controlled the pace from the start, taking a 6-2 lead at the break and whipping off five straight at the start of the second to push the score to 11-2. Thompson scored two singles and a double before Ramirez closed the bout, 15-5.

The win allowed Ramirez to launched himself back up the point standings, trailing only two-time World Cup circuit medalist Jake Hoyle (New York City, N.Y.) in Olympic qualifying points. With Ramirez, Thompson, Bratton and Smith each ranging in age from 32-38 years old, the 2020 Olympic Team race could, indeed, come down to youth vs. experience for the four positions on the line.

Olympic nominations for men’s epee will be completed on April 19 during the U.S. Olympic Fencing Team announcement in St. Louis. Selections will be made based on positions in the USA Fencing National Team Point Standings with the top three athletes in the standings earning positions in both the individual and team events and the No. 4 fencer traveling to Tokyo as a replacement athlete for the team event only.

The Division I men’s saber event was won by Ziad Elsissy, an NCAA All-American at Wayne State who is aiming to represent Egypt in Tokyo.

Elsissy not only took gold, but did so as the only foreign fencer in the top eight as past members of Team USA jockeyed for Olympic qualifying points.

Mackiewicz started his semifinal against Elsissy strong, taking an 8-4 lead at the break, but the Egyptian came back to tie the bout at 12 and edge Mackiewicz, 15-14.

In the finals, Elsissy fenced Homer, building an 8-6 lead after the first period before Homer came back to tie the bout first at eight and then at 11. Elsissy ended with four straight touches to take the bout, 15-11, and win his first NAC title since the 2016 December NAC.

Homer earned 1,100 Olympic qualifying points to stay in the No. 2 position in the standings behind his 2016 Olympic teammate, Eli Dershwitz (Sherborn, Mass.) – the 2018 Senior World silver medalist who did not compete in Kansas City. A 2016 Junior World Team member who lost to Homer in the semis, Grant Williams (Atlanta, Ga.) earned bronze at the NAC which scored him enough points to move up to third in Olympic qualifying points with 2019 Senior World Team member Khalil Thompson (Teaneck, N.J.) in fourth after a top-32 result at the Madrid World Cup in May, combined with his top-32 at the NAC.

The men’s and women’s saber squads will be selected based on the USA Fencing National Team Point Standings at the conclusion of the FIE Grand Prix Seoul on April 26.

A two-time gold medalist at the 2019 Nationals in the parafencing events, Will Chase (Dacula, Ga.) won the parafencing men’s epee competition, defeating former World Champion Tareq Alallaf (KUW) in the final bout. Alqallaf led the bout, 7-4, early in the first period and was poised to close at 14-13 when Chase saved the bout with two singles and a 15-14 victory.

In a rematch of their final at the 2019 National Championships, Ellen Geddes (Johnston, S.C.) and Shelby Jensen (Salt Lake City, Utah) fenced in the final again with Geddes seeking to avenge her loss in April. After a scoreless first period, the bout remained tied at four after the second. Ellen led the bout, 12-11, late in the third, but Jensen answered with a single with 12 seconds on the clock. In overtime, however, Geddes took just eight seconds to score, ending the bout at 13-12.

A 2018 National Champion in both the Division IA and Y14 events, 16-year-old Justina Lam (Cherry Hill, N.J.) won her first NAC title as a cadet, taking on her Fencers Club teammate, 15-year-old Sofia Gaydos (New York City, N.Y.) Lam took a 5-1 lead in the first period with Gaydos scoring a late touch before the break to take the score to 5-2. Lam opened the next period with three straight touches and closed the second at 9-5. In the third, Lam pulled away from a 10-7 lead to score five unanswered touches for a 15-7 victory.