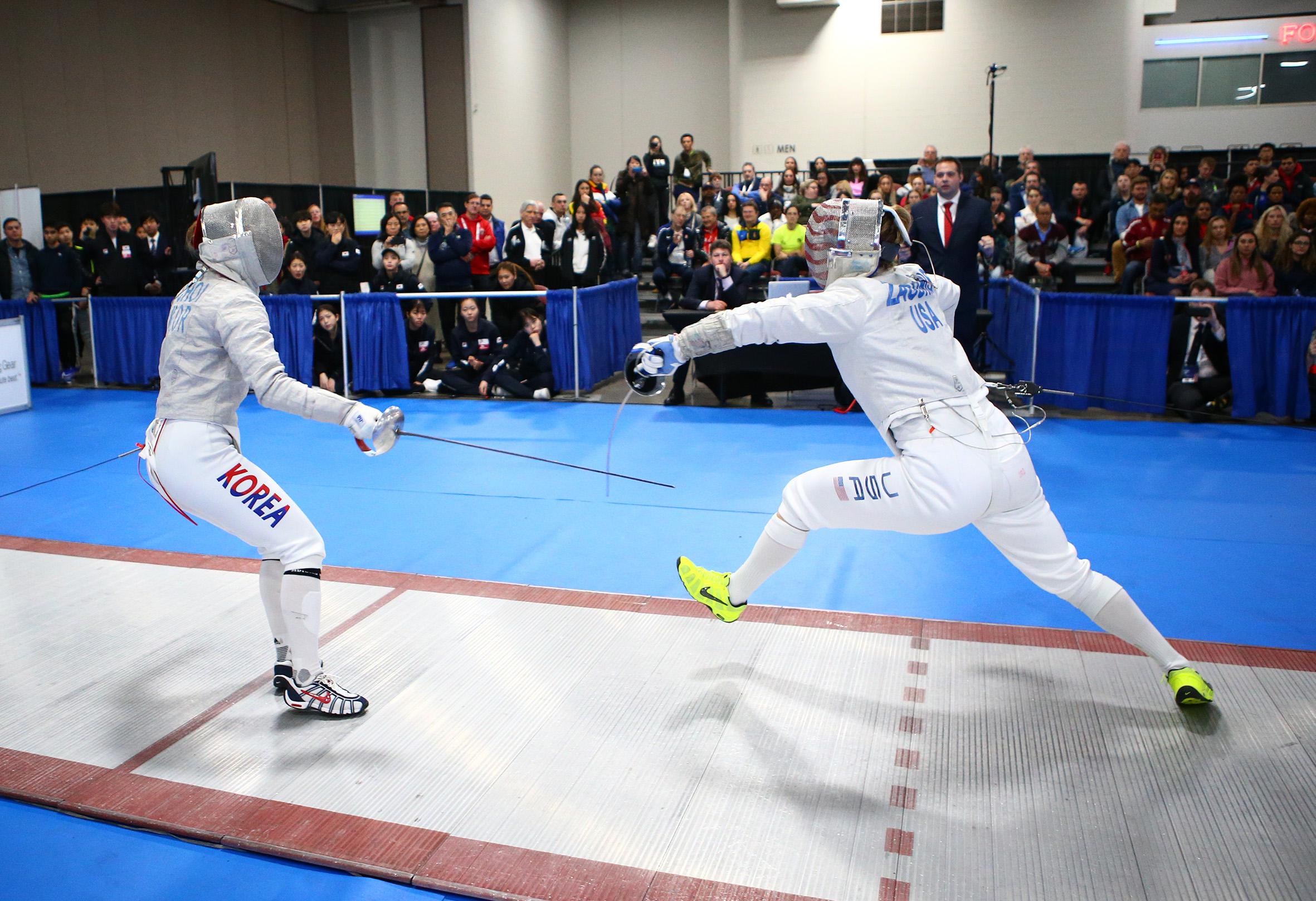 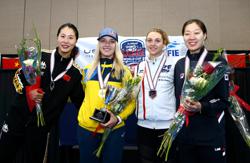 The 13th-place finish marks her best at a World Cup since Orleans in November of 2018.

“Overall I think I fenced pretty well today,” Zagunis said. “I don’t think that my score in the last bout reflected how I was feeling about my fencing today. I was happy about getting a top 16. It’s my best result in a while, so of course I wanted to do better today, but I had to run into [Olga] Kharlan pretty early and she’s a strong fencer. So, I did my best.”

Tied at five, Zagunis scored 10 straight touches to close the bout in a dominant 15-5 effort.

“All of my opponents today were really strong and really fast, the Koreans especially,” Zagunis said. “I knew I had to be ready and be sharp and so I didn’t want to give up any ground after executing my plan pretty well against Choi.”

However, Zagunis faced No. 1 ranked Olga Kharlan (UKR) in the table of 16. Despite keeping the bout close early, Kharlan, a four-time Olympic medalist, ended the first period on a 5-1 run and scored the first five touches of the second period, going on to win, 15-9.

“[Kharlan is] a very aggressive fencer. She’s very creative and so I think that I had the right idea, but I didn’t quite execute what I needed to do,” Zagunis said. “She’s also somebody who creates a lot of actions, so the bout just got away from me a little quickly and I should’ve slowed things down in retrospect. Obviously, hindsight is 20/20, but she’s a strong opponent and I have to try to learn from this defeat and come back and get ready to face her the next time.”

Kharlan went on to take the gold, her fourth medal on the circuit in the United States, but first since 2014. Four-time Senior World Team member Jiarui Qian (CHN) earned the silver while 2016 Olympian Manon Brunet (FRA) and 2017 World Championship silver medalist in the team event Jiyeon Seo (KOR) claimed bronze.

Stone took an early 8-4 lead in her table of 64 bout against three-time World team member Hengyu Yang (CHN) and went on to win, 15-10.

In the table of 32, though, Stone fell behind early to 2016 Olympic team silver medalist Alina Komashchuk (UKR), facing an 8-3 deficit at the break. Stone closed the gap to one at 14-13, but Komashchuk took the final touch for a 15-13 victory.

Burke’s top-32 finish is the second of her career at the start of her third season on the senior World Cup circuit.

In the table of 64 against three-time Senior World team member Yaqi Shao (CHN), Burke jumped out to an 8-5 advantage. Shao cut the lead to one at 12-11, but Burke kept her composure and won, 15-13.

Chamberlain drew 2019 Senior World bronze medalist Theodora Gkountoura (GRE) to start Day 2. Down 8-6 at the break, Gkountoura earned the first two points of the second and went on to win, 15-10.

Fencing Kharlan, two-time Junior World team medalist Tartakovsky came from behind to face a one-point deficit at 10-9. However, Kharlan ended the bout with five straight touches for a 15-10 victory.

Singleton-Comfort got off to a strong start against No. 2 and two-time Olympic silver medalist Sofya Velikaya (RUS), taking an 8-6 lead at the break. Tied at 11, Velikaya finished on a 4-1 run end Singleton-Comfort’s day.