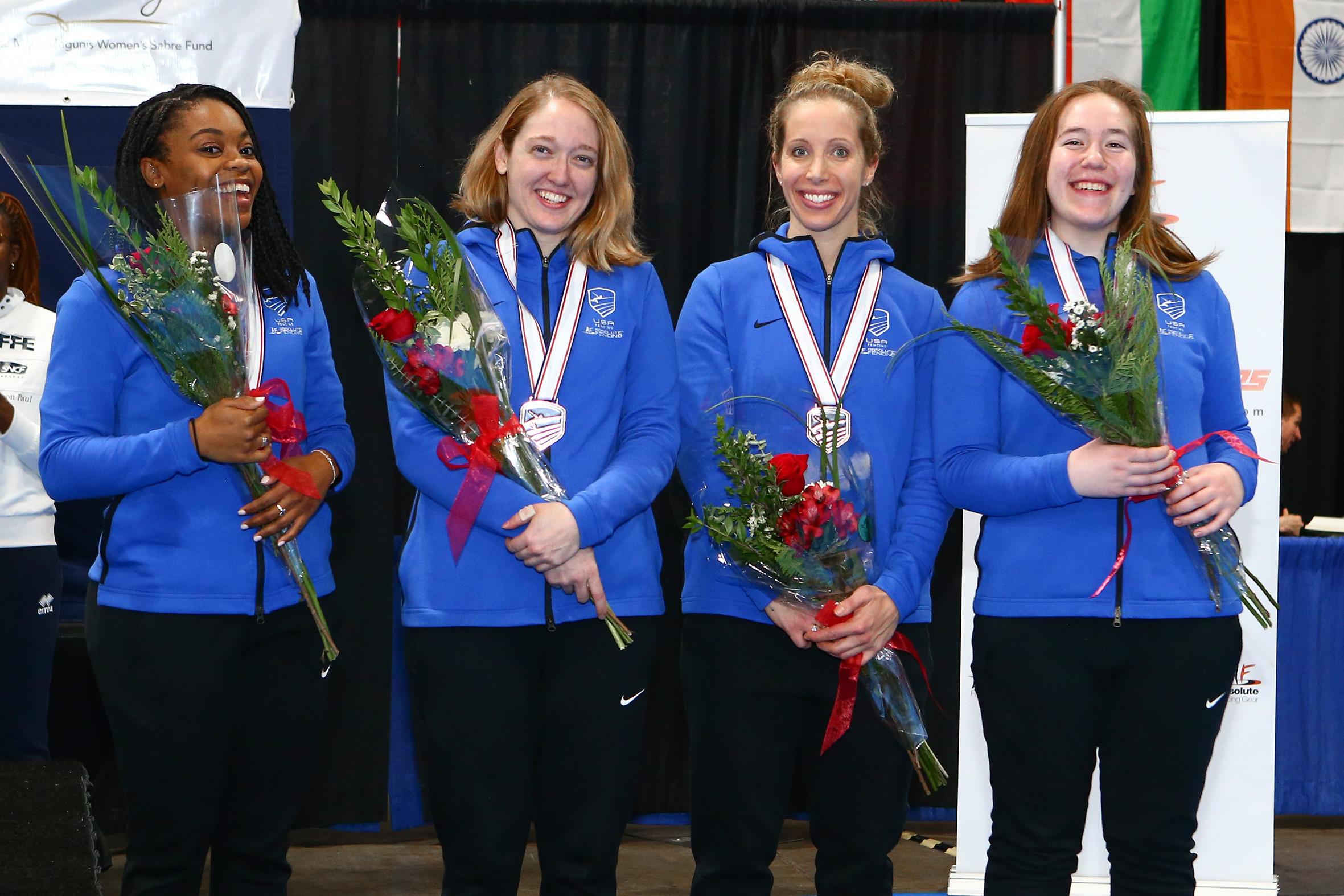 “It’s really good to be back on the podium,” Stone said. “It means a fresh wave of confidence. We know we’re this good and we just need to show it every day on the strip – take nothing for granted and do all the work.”

As the No. 6 seed, Team USA earned a bye to the table of 16, where it defeated Germany, 45-35. The United States jumped out to a quick 10-1 advantage and saw its lead grow to 17 entering the anchor bout. Zagunis led the Americans with a +10 indicator.

Facing No. 3 Italy in the quarter-finals, Team USA once again started the match strong, winning or tying five of the first six bouts to take a 30-23 lead. Still up seven going into the anchor bout, Italy started its comeback, but Stone held on for the upset, 45-43.

“[Italy has] edged us out so many times,” Stone said. “We’ve all gone home and done homework on them. We knew to have a certain type of footwork and a certain kind of strategy and to be confident in those decisions and trust each other. I was really happy Mariel gave me a great lead going into the final bout because I needed it. [My teammates] were giving me some great advice, even when I started getting nervous. They said the perfect things, I corrected my footwork … and brought it home.”

After a 45-31 loss to France in the semifinals, Team USA fenced Ukraine in the bronze medal match, giving the United States an opportunity to win a medal on home soil.

“It’s a little nerve-wracking because you have the crowd supporting you, wanting you to win, and you don’t want to let them down, but at the same time, it gives you this extra boost of crazy energy because you have so many people supporting you,” Stone said. “You’re not alone and you feel it every single touch. It’s amazing. It’s a good feeling and good feelings bring on good touches.”

Although Ukraine took an early 10-6 lead, Stone won the third bout, 9-4, to give Team USA a 15-14 lead. Thompson, who subbed in for the first time in the final, and Zagunis then earned 5-4 victories in the next two bouts to extend the lead to three.

Another pair of 5-3 victories from Thompson and Stone in the seventh and eighth rounds gave Zagunis a seven-point cushion going into the anchor bout against two-time Olympic medalist and No. 1 Olga Kharlan, who defeated Zagunis in the individual competition on Saturday.

Zagunis stayed with Kharlan, closing out the bout for a 45-39 victory for bronze.

Stone, who switched the momentum in the third bout, finished with a +7 indicator.

“I tried to take a deep breath and not think about what’s at stake,” said Stone of her win in the third bout. “It’s a regular bout. [Olena Voronina] got the jump on me on a couple of the early touches and then I listened to my teammates. They were giving me some really good advice and you have to trust your teammates. I did the kind of footwork they were recommending and was just going for it. You have to be brave and go for whatever actions you can within that footwork that they were telling me about.”

The bronze medal allowed Team USA to broaden its lead over Canada in the race for Olympic qualification. The top four teams in the Olympic Qualifying Rankings at the conclusion of the Sint-Niklaas World Cup in March will earn automatic berths to the Games, followed by the highest ranked team in each zone that has not already qualified. Team USA sits seventh in the Olympic qualifying standings with Americas Zone rival Canada in 13th and needing at least one podium finish in the final two World Cups to pass Team USA.

In the gold medal final, France defeated Hungary, 45-25, to win gold at this event for the fourth straight year and move up to No. 2 in the Olympic qualifying standings behind 2019 Senior World Champion Russia, which finished a surprising eighth.

The race for Olympic qualification within the European zone also heated up in Salt Lake City with Hungary and Team USA’s wins over Ukraine moving Ukraine to sixth behind Hungary in fifth as the two teams continue to battle for a position from the European Zone.