Mariel Zagunis Qualifies for Tokyo with Return to Athens for Gold 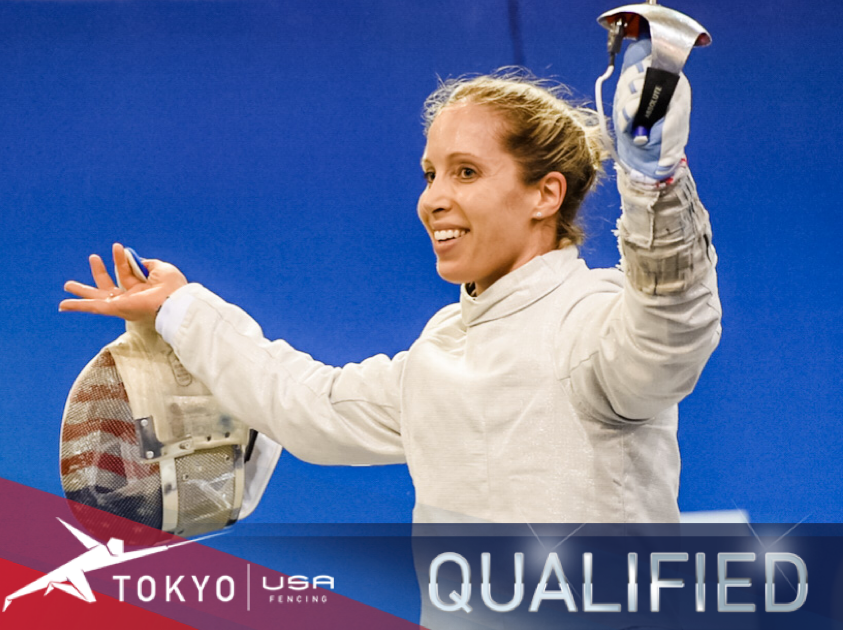 (Colorado Springs, Colo.) – When Mariel Zagunis (Beaverton, Ore.) looks back at her career, Athens will be a place in which her journey to become the most decorated fencer in U.S. history not only began, but where new milestones were reached over the course of her journey to compete at five Olympic Games.

In 2004, Zagunis stood on the top of the Olympic podium for the first time, winning gold at the Athens Games as a 19 year old – a feat she would repeat four years later at the 2008 Olympic Games in Beijing.

Zagunis returned to Athens for gold again in 2016 where the city she loved became the place where she qualified for the 2016 Olympic Games, taking the World Cup title and punching her ticket to Rio where she would win her second Olympic team bronze medal.

Just days after her 35th birthday, Zagunis was back in Athens on Saturday and was in championship form again, winning her first World Cup title since giving birth to her daughter Sunday in 2017.

On Sunday, Team USA placed 11th – a finish that qualified the squad for Tokyo where Team USA will compete in all six events with the Tokyo Games marking the first time six team events will be held at the same Olympic Games.

With the team’s berth secured, Zagunis also punched her individual ticket to Tokyo, mathematically securing her spot on the team with two international tournaments remaining in the qualification process as well as the 2020 USA Fencing National Championships in St. Louis on April 17-19.

Zagunis qualified for both individual and team events in Tokyo as the first of three fencers on the U.S. Women’s Saber Team to do so. The top three fencers in the USA Fencing National Team Point Standings at the conclusion of the Seoul Grand Prix on April 26 will qualify for Team USA with the fourth athlete in the standings earning a position in the team event.

With her win in Athens, Zagunis also returns to the No. 1 ranking in the United States, passing teammate Eliza Stone (Chicago, Ill.) – a 2018 Senior World individual bronze medalist who is aiming to qualify for her first Olympic Team and is ranked No. 4 in the world.

Zagunis dominated the tournament, defeating all six of her opponents by five-touch margins or greater.

Fencing with a bye into the 64, Zaguins drew Valeriya Bolshakova – a 2015 Junior World team silver medalist for Russia who now competes for Azerbaijan. Zagunis took an 8-3 lead after the first period and blew through the second with a 7-2 run and a 15-5 victory.

In the 32, Zagunis scored seven unanswered touches against 2016 Olympic team silver medalist Olena Voronina (UKR) as she went on to another 15-5 win.

Egyptian Nada Hafez came within three touches of Zagunis at 12-9 in the 32, but the five-time Senior World Champion closed with three straight to take the bout, 15-9, and qualify for the quarter-finals at a World Cup for the first time since 2018.

Only 2015 Senior World bronze medalist Anna Marton (HUN) would stand between Zagunis and the podium. Marton, who won their previous four matchups during the current quad, kept the bout close through the start of the second period, holding Zagunis to a 9-8 lead. The American was undeterred, however, pulling away from Marton at 10-9 with four straight touches as she went on to take the bout, 15-10.

In the semifinals, Zagunis shut out two-time Cadet World medalist Misaki Emura (JPN) in the second period, putting up an 8-0 run to win the bout, 15-8.

Pusztai failed to keep up with Zagunis, however, who took an 8-2 lead after the first period and ended with a 15-6 win in the second.

The win marks the 16th career individual World Cup title for Zagunis who holds 65 medals across Grand Prix and World Cup events. As the most decorated athlete in USA Fencing history, Zagunis will become just the second U.S. woman to compete in five Olympic Games in the sport of fencing.

Wozniak, who is seeking to qualify for her third Games, moved up the standings from No. 7 to No. 3 behind Zagunis and Stone, putting nearly 1,000 points between herself and 2019 Senior World Team member Kamali Thompson (Teaneck, N.J.) who sits in fourth after a loss in the preliminary tables on Friday left her outside the top 64.

Wozniak set the tone early in her next bout as well, building an 8-3 lead against 2016 Olympic team silver medalist Alina Komashchuk (UKR) and finishing with a 15-11 victory.

Wozniak held a 10-8 lead over Gkountoura in the quarter-finals, but the eventual bronze medalist went on a 5-1 run and claimed the bout, 15-12.

The 2018 NCAA Champion for Princeton, Maia Chamberlain (Menlo Park, Calif.) earned her first top-32 result on the senior World Cup circuit as she aims to qualify for her first senior team after representing Team USA at the Cadet Worlds in 2015.

Chamberlain went 4-2 in the pool rounds on Friday and came up against one of her rivals for a position on the team – Aleksandra Shelton (Tigard, Ore.) – in the preliminary table of 128. Although Shelton made a 4-0 run to steal the lead at 14-13, Chamberlain closed strong to take the bout, 15-14, and bested Loredana Dima (ROU), 15-4, to make the second day.

Chamberlain tied the score at nine against Pusztai in the second period of her table of 32 bout, but Pusztai went on a 6-1 run to earn the win, 15-10.

With her top-32 finish, Chamberlain moves into the top eight in the National Team Point Standings.

Two members of the 2020 Junior World Team also competed on Sunday, earning top-64 results as both fencers attempt to break into the top four and qualify for Tokyo.

Harvard sophomore Elizabeth Tartakovsky (Livingston, N.J.) finished the pool rounds with a 4-1 record to advance directly to the table of 64. The two-time Junior World team medalist struggled on the second day, however, falling to 18-year-old Jeon Hayoung (KOR), 15-7.

Team USA locked its qualification position for Tokyo with an 11th place result in the team event on Sunday with Zagunis, Stone and Thompson fencing with Francesca Russo (Wayne, N.J.) who sits sixth in the National Team Point Standings.

Although the Americans were upset in the 16 by Spain, 45-26, they rallied in the next bout to defeat a Romanian team led by Pascu, winning all nine bouts to take the match, 45-26.

In the next round, Team USA faced a Ukrainian team fighting for its Olympic life as the reigning Olympic silver medalists stand on the brink of missing qualification as a team for Tokyo after a 45-43 loss to Poland in the 16. Although she did not fence in the individual event, four-time Olympic medalist Olga Kharlan returned for the team competition and helped lead her squad to a 45-28 win over Team USA.

Team USA rebounded in the next match, however, defeating Venezuela, 45-35.

In addition to the United States, Russia, France and Korea also have secured their berths to the Tokyo Olympic Games with four of the eight spots remaining, going into the final Olympic qualifier in Sint-Niklaas, Belgium in two weeks.