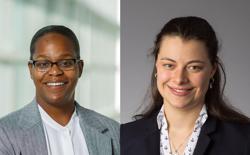 The USA Fencing Board of Directors is pleased to welcome two new directors with the addition of 2016 Olympian Kat Holmes (Washington, D.C.) and Brandeis University Director of Athletics Lauren Haynie (Waltham, Mass.) to the 12-person board.

Haynie will serve a two-year term as one of three independent directors on the board. With a career in college athletics that has spanned nearly 20 years, Haynie has served in her current role at Brandies since 2019. Previously, Haynie held roles in athletic administration at Wellesley College and MIT. Haynie began her career as an athletic trainer, working as the head athletic trainer for Lane College and going on to become the assistant athletic director for sports medicine at both Assumption College and Catholic University. Haynie holds two Master’s degrees – the first in education from Old Dominion University, followed by an MBA from Southern New Hampshire University. Haynie earned her Bachelor’s degree in kinesiology from Penn State.

Holmes, a Rio Olympian and 2018 Senior World Team Champion in women’s epee, will fill the open athlete director position after two-time Senior World medalist Daria Schneider (Brookline, Mass.) announced that she was stepping down from the role following her election to the U.S. Olympic & Paralympic Committee Board of Directors. Following a nomination process in which all members of Olympic, Paralympic and Senior and Wheelchair World Championships were eligible to run for the position, Holmes will assume the role unopposed for the remainder of the term that will conclude after the 2021 Olympic and Paralympic Games. In addition to serving on the board, Holmes will be the alternate fencing representative to the USOPC Athlete Advisory Council with two-time Senior World Team member Adam Watson (Hoboken, N.J.) serving as the AAC fencing representative. A 2021 Olympic hopeful and the chair of the USA Fencing Athlete Council, Holmes has been actively involved with a number of USA Fencing committees. Holmes graduated from Princeton in 2017 with a Bachelor’s degree in neuroscience and currently serves as a volunteer assistant coach for the Tigers. Following the Tokyo Games, Holmes will begin medical school at the Icahn School of Medicine at Mt. Sinai.