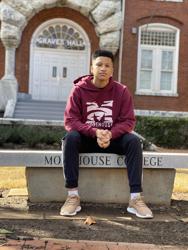 Collegiate fencing in the United States has grown tremendously over the last century with 43 colleges and universities hosting NCAA teams and more than 100 club teams flourishing around the nation.

One area that has seen very little presence of fencing, however, is the country’s 107 Historically Black Colleges and Universities.

A freshman engineering major at Morehouse College in Atlanta, Ga., Norman is seeking to launch the nation's only college club team at an HBCU.

With plans for the club to begin recruitment and practice this spring, Norman has already built an online presence for the Morehouse College Fencing Club (@MorehouseFencers on Instagram and Facebook).

“Especially now, it’s far more important to introduce black communities into the sport and introduce fencing into more black spaces,” Norman said. “Even given in current times, fencing is majority a white and Asian sport and not a lot of Black and brown communities are aware of fencing. I’ve spoken to some people who were interested in fencing when they were younger, but their parents said that it was too expensive or that it was a white person’s sport and that they wouldn’t feel as welcomed into the sport as they would basketball or baseball.”

Now a C-rated epee fencer, Norman came upon the sport when he discovered his high school was a part of the Georgia High School Fencing League.

“I had no knowledge about the sport or intention to do it. I just saw that my high school had a club for it and I wanted to check it out,” Norman said. “So I filled out the paperwork and I went to the first practice and I remember doing the footwork and the standard bladework actions and that’s how I fell in love with the sport.”

Although he had done a multitude of sports growing up, from gymnastics and football to basketball and tennis, Norman said he enjoyed the independence he found in fencing.

“When I got into fencing, it was my own type of freedom. I made the calls. I made the plays. And, depending on what I did, it had its own positive and negative effects. I liked having to rely on myself to win,” Norman said.

By his senior year, Norman had become a team captain, but when he began his freshman year at Morehouse, Norman was hesitant to start a fencing club at first, knowing the work it would take to build a program from the ground up.

“My original plan wasn’t to do it just because it was a lot of work between fencing and schoolwork, but, after some of the events that happened over the summer, I realized that it’s about time that an HBCU should have fencing given that no HBCU has ever had fencing before,” Norman said.

While Morehouse College will become the first HBCU to have a fencing club, Norman says he hopes the program will inspire other HBCUs to add the sport to their repertoire.

“I hope that it can also bring awareness to other HBCUs that fencing is a sport and that it is a program that other HBCUs should look into or should advertise for their students. And, hopefully, this can make fencers who go to HBCUs become inspired to create their own clubs for their schools,” he said.

Although Morehouse was online only in the fall, the college allowed students to move into the dorms for the spring semester with classes taking place on a hybrid basis.

When the team ultimately begins competing, Norman said Morehouse Fencers would take on college clubs throughout the region, including the University of Florida and Clemson as well as Georgia Southern, Georgia Tech, the University of Georgia, Savannah College of Art and Design and others.

“Now, I know it’s going to take some time and a lot of effort and money, but my end goal is that 1. Morehouse does start a club for fencing and that will give us recognition and 2. We’ll be a part of the NCAA and that will give us bigger competitors to go against and for our competitors to, in a way, respect us, but also be weary of us,” Norman said.

In the meantime, Norman’s focus is on recruiting athletes into the club, holding demonstrations and starting practices at the college’s recreation center.

“Because of COVID, unfortunately, not a lot of students are on campus. I do have an audience of students who would love to do it, but they’re stuck at home. But I also have an audience of students who would love to do it and are currently on campus. Within the next month or so, I will be hosting an interest class and demonstration in our gym so students can come in and try the equipment and try fencing and, if they really like it, they can sign up,” Norman said. “I’ve spoken to President Thomas about it in October and our athletic director and they are 100% on board. I’ve spoken to the director of club sports. He’s been helpful in advising me to get the club started and I have a few connections that are helping me provide uniforms and equipment for students.”

While some college clubs have professional coaching staff, most are started by fencers who love the sport and want to share it students at their colleges and universities after competing in high school. For other fencers looking to begin programs, Norman has advice to share.

“I cannot stress this enough, but my advice is communication. If you really want to start a club at your college, but they’re not responding to your emails, you have to do more than that. You have to chase them down. You have to meet them in person. You have to call them. You have to set reminders … They may overlook what you’re trying to do and it’s really important that you stress communication and that you meet them face to face,” Norman said.