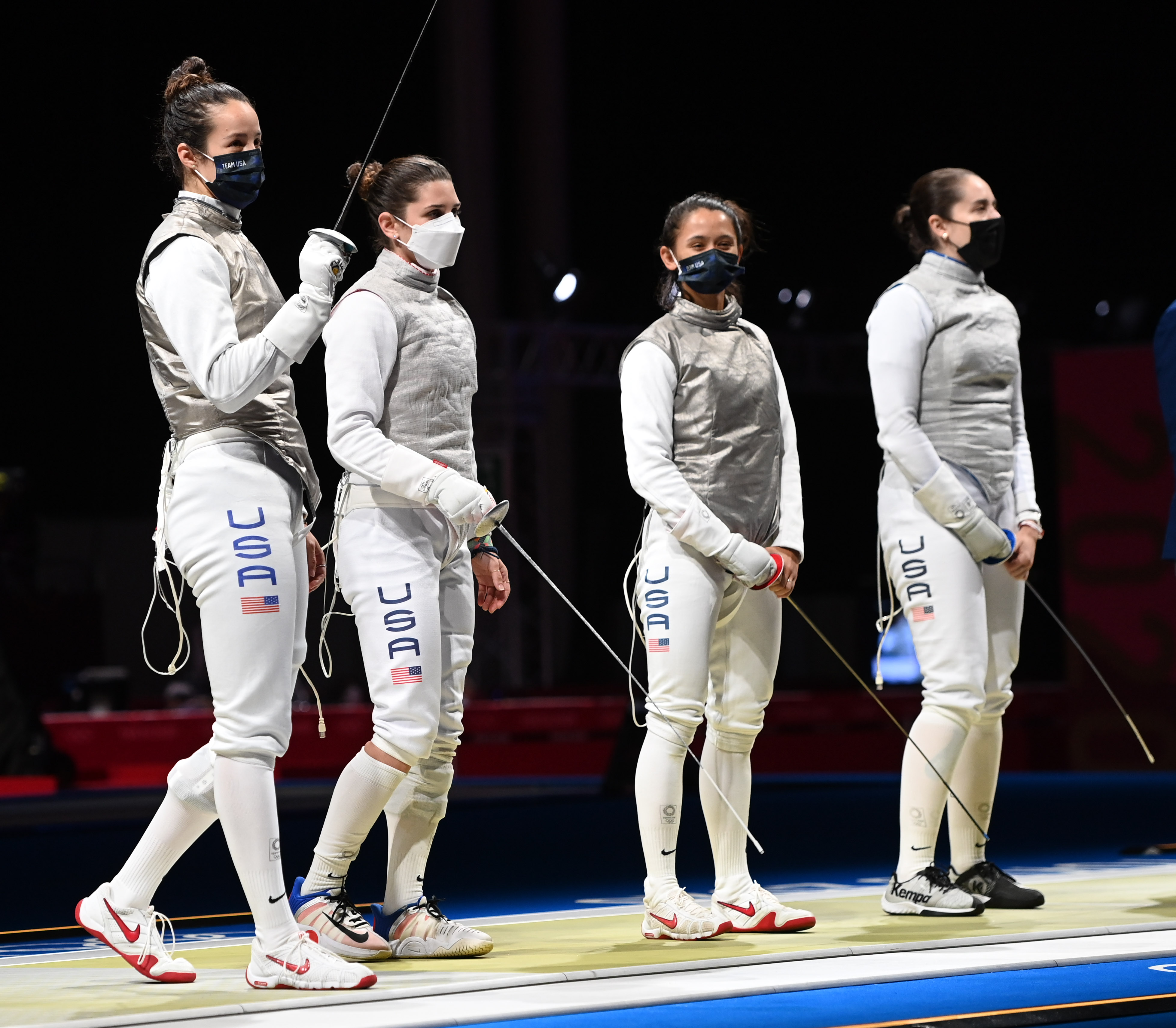 (Tokyo) – The U.S. Women’s Foil Team ended its Olympic journey in Tokyo with a fourth place finish on Thursday after a loss in the bronze medal final to Italy – a team that has medaled at every Games since 1988.

“We left our hearts out there. We’ve been training like a team, like a family, for five months, and of course, we wanted that medal, but we’ve had such a fulfilling, beautiful journey that none of us knew was possible,” said team anchor Lee Kiefer (Lexington, Ky. / Bluegrass Fencers Club / Notre Dame) who was seeking a medal with her teammates to add to her individual Olympic gold. “We’ve taken our fencing to places that I think is incredible and I’m filled with pride for my teammates.”

The Americans opened the day with a 45-36 win over Japan in the quarter-finals where Team USA won seven of nine bouts with two-time Olympian Nicole Ross (New York City, N.Y. / New York Athletic Club / Columbia) helping the United States pull away in the third period with a 7-5 win over Sera Azuma (JPN) that gave Team USA a 15-11 lead. Team USA continued to pick off bouts against the host nation with Kiefer anchoring the squad to a 45-36 victory.

All three fencers posted positive indicators in a strong start to the tournament with Ross ending at +6, followed by Kiefer at +2 and Dubrovich at +1.

In the semifinals, the United States met ROC – the reigning Senior World Champions – and gave the Russian squad led by 2020 Olympic individual silver medalist Inna Deriglazova its closest match of the day.

Although Kiefer ended the match at +7, and Ross and Dubrovich each produced key wins over Marta Martyanova and Larisa Korobeynikova, respectively, ROC came back in the final rotation to take a 39-36 lead going into the anchor bout.

“My teammates fenced amazingly. Everyone was very solid and they were fighting the whole time and we had an amazing energy,” Kiefer said after the loss.

The final match against Italy saw the addition of three-time Senior World Team member Sabrina Massialas (San Francisco, Calif. / Massialas Foundation / Notre Dame) to the starting lineup as she subbed in for Dubrovich. Massialas put up a solid bout against 2018 Senior World Champion Alice Volpi, trailing the former World No. 1 by just one touch at 5-4 in the third bout, keeping Italy’s lead to 15-13.

The Italians brought the heat in the next two rotations, however, winning six straight bouts and earning gold with a 45-23 victory.

“We did everything we could today. We left it all out and no regrets. We’re really heartbroken, but we have each other and we have such a special bond and a special team, and I just feel so, so lucky to have the support of Lee and Sabrina and Jackie, Buckie [Leach], Greg [Massialas] and our whole team,” Ross said. “Being here under these extremely difficult conditions is an honor and we hope that a lot of little girls back in the U.S. are watching us and dreaming with us and looking forward to the next generation and the next Olympics when they’re going to win medals.”