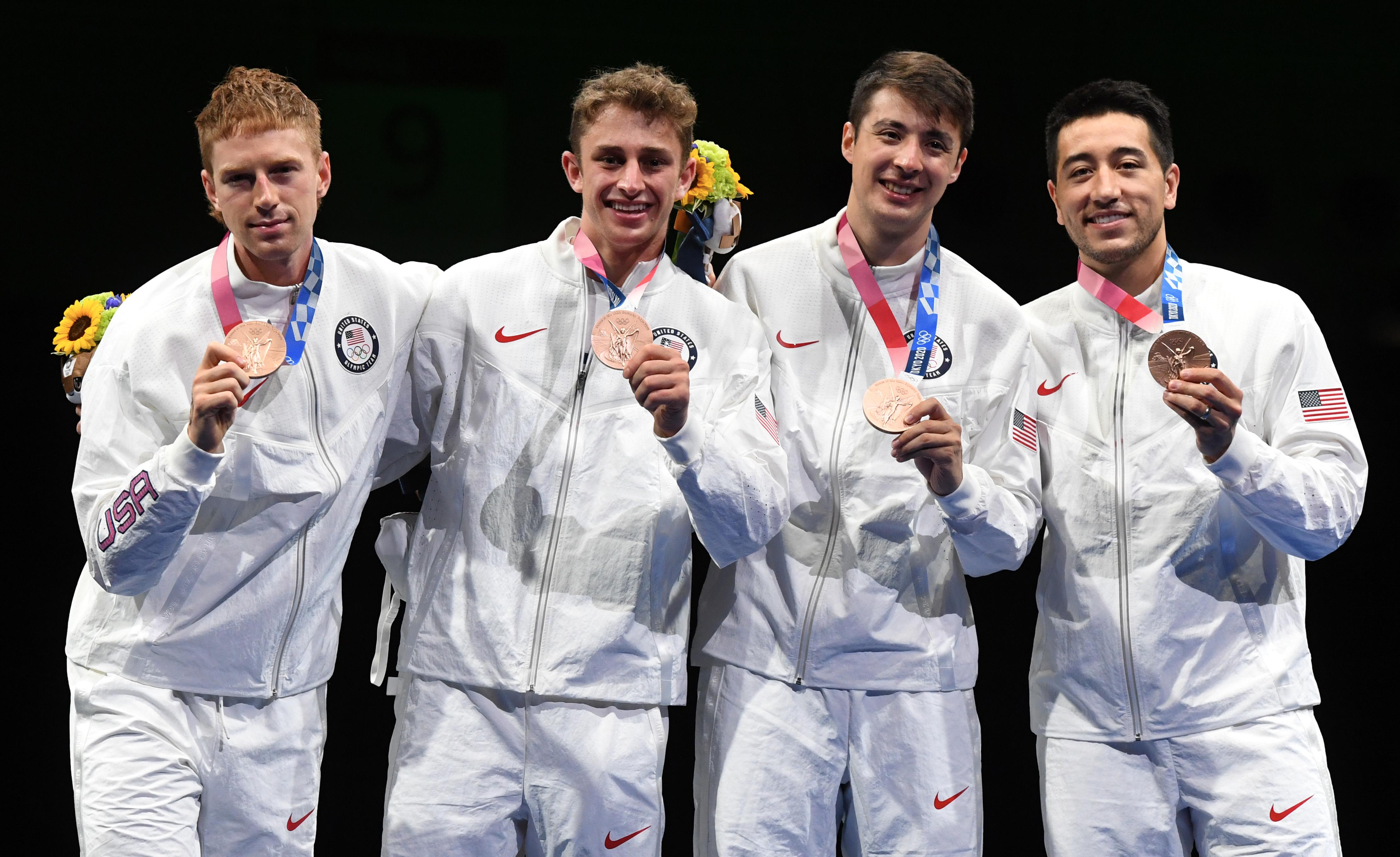 One Pan Am Games title.

The U.S. Men’s Foil Team won 22 straight international medals going into the Tokyo Olympic Games and dating back to 2017.

But the No. 1 team in the world had not fenced a team event since winning gold at the Cairo World Cup in February of 2020 – just weeks before the world shutdown due to the COVID-19 pandemic.

The U.S. men have fenced once internationally since the shutdown at the Doha Grand Prix in March of 2021, but the tournament which marked the only return to competition on the international circuit was an individual event only.

The question remained: Would the streak remain intact when the squad took to the world’s greatest stage in Tokyo?

The answer would be yes as Team USA returned to the men’s team foil podium for the second time since 1932 – winning bronze in a repeat performance from the Rio Olympic Games.

Three of the four U.S. men who won bronze in 2016 would return to the strip this year as well – the same three fencers who also competed together at the 2012 Games.

Massialas, Meinhardt and Itkin competed in both individual and team events with Imboden serving as the replacement athlete for team event only.

Team USA’s day began with a quarter-final matchup against a German team that included both a five-time Senior World Champion and an Olympic gold medalist.

Germany started strong, taking a 10-6 lead after the first two bouts, but Meinhardt outscored 2008 Olympic Champion Benjamin Kleibrink, 9-4, in the third to regain the lead for Team USA at 15-14. Imboden was subbed in for the remainder of the day beginning in the fourth bout and Team USA built a 40-32 lead going into final bout. Anchoring for Team USA, Massialas faced five-time Senior World Champion Peter Joppich in a rematch of the table of 32 bout where Joppich defeated Massialas in the individual event. This time, Massialas took the win, 5-4, and Team USA advanced, 45-36.

“The German team is a strong team. Obviously, I lost to Joppich in the individual, but I came out there ready to fight right away. We all knew this was going to be a grind no matter what,” Massialas said. “You always have to fight for every touch and for every bout, and that’s what we did. I went out there, I won my first one, but when someone falls behind, we all pick them back up, so that’s our job as a team is to always pick up the person who’s not feeling so good, and that’s exactly what we did.”

The semifinals would be a rematch between the United States and ROC who defeated Team USA in the 2016 Olympic final. With ROC leading the match, 20-17, after the first four bouts, Team USA fought to regain a 40-39 lead going, including a 5-3 win by Imboden over 2016 individual Olympic bronze medalist Timur Safin who was subbed in as the replacement athlete in the seventh. The anchor leg set up a bout between Massialas and 2019 Junior World Champion Kirill Borodachev – a rising star for ROC who earned a top-eight result in the individual event after defeating Itkin in the table of 16.

Borodachev rebounded for ROC and outscored Massialas, 5-1, to send ROC into the finals.

“They’re a young team. They’re a strong team though. They came prepared. They fought really hard and unfortunately, that’s sports. You can’t always get the result you’re looking for. I think we fenced really hard, but there were times where we felt slightly uncomfortable, weren’t able to capitalize on actions even though we knew we could do it,” Massialas said. “But at the end of the day, you lose that, you take your time to be upset, but that’s where the camaraderie the and brotherhood comes into a play. We lift each other back up and we fight hard for that bronze.”

After the loss, the team had three hours to regroup and prepare for a bronze medal match against Japan – a host team that upset Italy, 45-43, in the quarters before a 45-42 loss to France in the semis.

“We didn’t feel like any one person was responsible. We didn’t put blame on anyone. We knew everyone had fought as hard as they could and what happened happened,” Meinhardt said. “We were ready to go out there again and fight for every touch like we had in that semi and hopefully things would come out better, but we believed in each other. We were able to stay positive, played some cards and just got loose and came out fighting.”

In the bronze medal final, Team USA won or tied all nine of its bouts against Japan, ultimately building a 14-point spread that would turn into a 45-31 victory.

“I think the biggest challenge was just going out there and fighting for every single touch,” Massialas said. “For us, especially those early matches were all 4-4, 4-3 … I think we all did a really good job of, even though the match was close, just get that last touch, get that extra lead, get that extra touch and that just adds up over time and then by the end, it was a pretty comfortable victory.”

Imboden said the up-and-coming Japanese squad reminded him of where he and his teammates were at the 2012 Olympic Games where Team USA placed fourth.

“We were also that young team at one point, so we’ve been there. We’ve lost this match. We’ve won it now twice in a row,” Imboden said. “The Japanese guys are incredible athletes and they’re going to experience this again I’m sure.”

For the U.S. Men’s Foil Team, Tokyo marks the third straight Olympic Games where the squad has fenced for a medal with four Senior World Championship podium finishes in between, including gold in 2019 and silvers in 2013, 2017 and 2018.

“We went from a longshot to make the top four to being upset that we didn’t win gold,” Imboden said. “I hope this is able to springboard the fencers back home to really have them chase their dreams because we’ve shown the world that US Fencing has come so far and that if you put in the work, you can get those results too, so I’m just happy for the generations of fencers behind us and hopefully they will make us proud.”

Now 21 years old, Itkin was a Y-12 fencer when he watched his now teammates compete at the London Games, but has since followed in the path of his idols, winning junior and senior titles before qualifying for Team USA as the No. 9 fencer in the world and a gold medalist on the World Cup circuit.

“Nick is absolutely a symbol of that idea of stepping up to the team young and just completely falling in line with the idea you’re here and if you’re on the men’s foil team, you’re here to win,” Imboden said. “We’ve won a lot of stuff together and he’s proven that that system is going to be passed on and he’ll pass it on as well.”

Itkin, who said he is already looking ahead to the Paris Games, entered Tokyo seeking to win an Olympic title with his teammates after winning four World Cup medals, including three gold, prior to the COVID-19 shutdown.

"We all wanted a gold medal but we are a group, we got a bronze medal that we are all excited to have. We fenced really well in the last bout and this team is very special,” Itkin said. “I think we deserve a medal because we worked really hard. A year off is a lot for training, but we regrouped, and we came back with a medal."

Throughout the day, the squad fought for each other on the strip, not only as teammates, but as a brotherhood of men’s foil fencers that has been together for more than a decade and is seeking to build the next generation that will join the family and continue the tradition.

“The best part about being on a team is the guys on the team here and working as a unit and the love we have for each other. One of the things we kept saying today was that we love each other and we’re happy to fight this day with each other no matter how it turned out, medal or no medal,” Imboden said. “That’s the brotherhood and the memories that I’ll never forget. The medal is the icing on the cake, but being with them is the memory that I will always hold dear.”